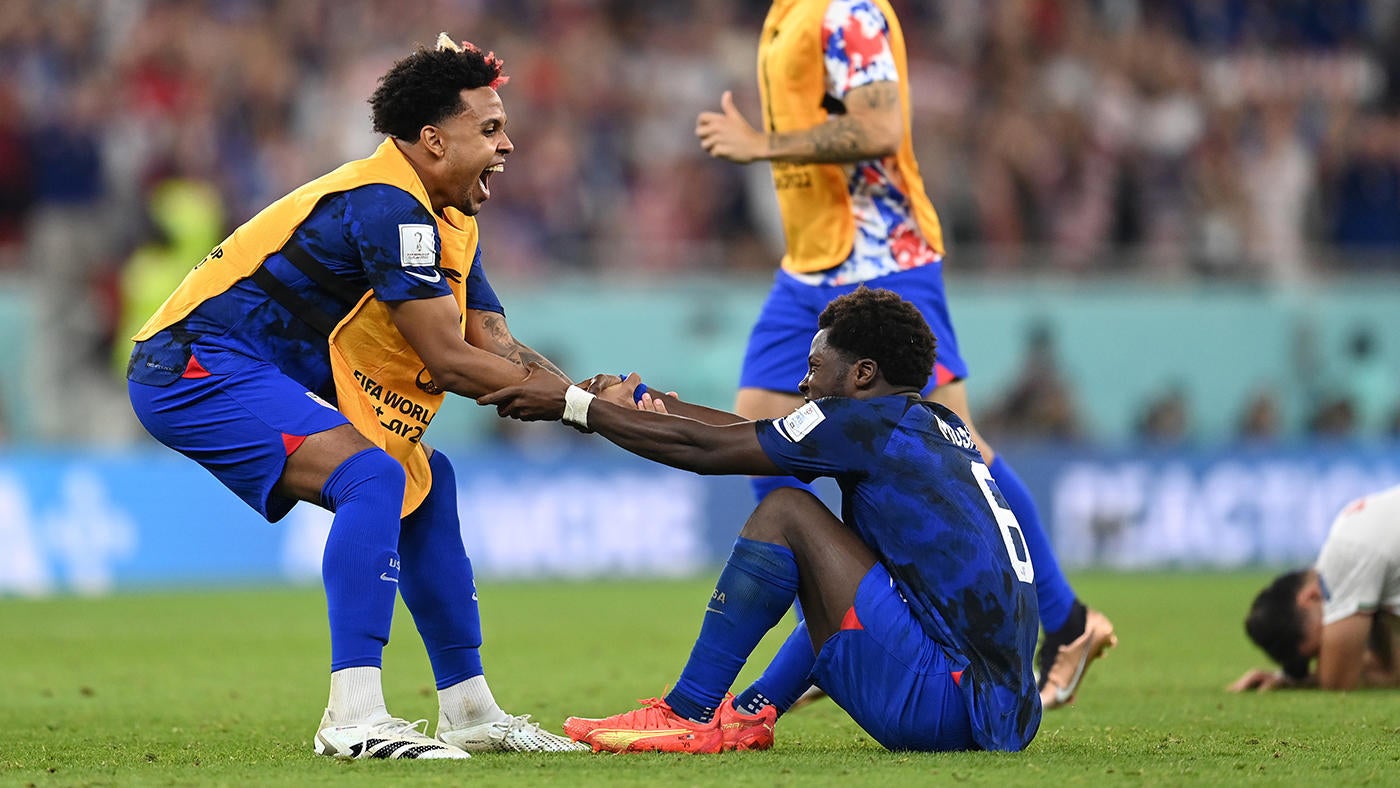 The United States are through to the last 16 of the 2022 FIFA World Cup in Qatar after a 1-0 victory over Iran on Tuesday. It was another match that featured a hard-nosed, gritty performance from the midfield unit of Weston McKennie, Tyler Adams, and Yunus Musah.

Dubbed the “MMA” midfield after their names, this group has the capabilities to beat you with power, style and guile, much like mixed martial arts. They even showed their versatility by playing in their third different configuration of the World Cup in only three games.

A 4-3-3 was installed in the 1-1 draw to Wales, with Musah on the left, Adams as a defensive midfielder in the middle and McKennie on the right. Musah and Adams combined to form a double pivot in a 4-4-2, with McKennie acting as a right winger instead of a traditional central midfielder in the scoreless draw to England. On Tuesday’s 1-0 win over Iran, they switched back to the 4-3-3, but McKennie and Musah swapped sides to unlock the defense.

While most strong midfields have players who are strong in one of two different roles, what makes the USMNT midfield effective is that these players can assume different roles when they drive forward.

Gregg Berhalter gets a lot of room for error due to how good the midfield is, both defensively and in possession, and it’s an area of the team that is set for years to come. The oldest of the trio, McKennie, is only 24. There will be slight concerns if McKennie is unable to go more than 70 minutes against the Netherlands on Saturday, Dec. 3. He has played beyond the 66th minute just once in the group stage. That said, as long as the team capitalizes when he’s on the pitch again, like his involvement in Christian Pulisic’s goal against Iran with Adams leading the defense when he goes off the pitch, things will be fine against the Netherlands.

Listen below and follow In Soccer We Trust: A CBS Sports Soccer Podcast where your three favorite former USMNT players cover everything you could possibly want to know about the United States men’s national team during the World Cup in Qatar.

On his 20th birthday, Musah stepped up in a big way, completing 44 of 49 passes and taking two shots. He plays the game on the edge, and at times you don’t know if he’s going to win the team the game or lose it, but that unpredictable nature aligns well with freeing up space for McKennie and the attack. They have been able to play with freedom because the captain of the team, Adams, is behind them ready to clean up everything.

But don’t let Adams’ defensive positioning fool you, he can push the ball up the pitch as well. Musah is leading the team in passes completed in the final third during the World Cup with 36. He’s ahead of Pulisic (32), McKennie (31), Weah (31) and Adams (30). It shows just how much the midfield is interchanging with the attacking players to make the team tick even without a proper striker. Almost one third of Musah’s total passes are coming in the final third. That’s because he’s been allowed to operate in advanced positions consistently to keep Pulisic involved in the match and create safety valves so the team can’t get boxed in by the defenses that they’ve faced so far.

It’s a large reason why no matter which team they’ve played, the USMNT have been able to create strong attacking chances during the first halves of matches. And getting deeper into the World Cup, their fitness levels should continue to rise to keep the intensity up for the beginning of second halves. With the youth of the team, the midfield could be locked in for almost the next decade, giving Berhalter many reasons to be excited about their potential.

They’ll need Pulsic healthy to capitalize on the chances created, but it wouldn’t be a surprise to see the team roll out their fourth different midfield configuration to keep up with the Netherlands on Saturday. Louis van Gaal’s side has already shown that it can cave to pressing sides in its draw to Ecuador. Berhalter will be sure to have his team ready to fire out of the gate. The are playing with house money in the round of 16 and this young team is here to make a name for themselves. They’re doing just that and then some while solidifying the core for the 2026 World Cup on home soil.