Alex de Minaur, Thanasi Kokkinakis, Matt Ebden and Max Purcell have been selected to represent Australia at the 2022 Davis Cup Finals in Spain next month. 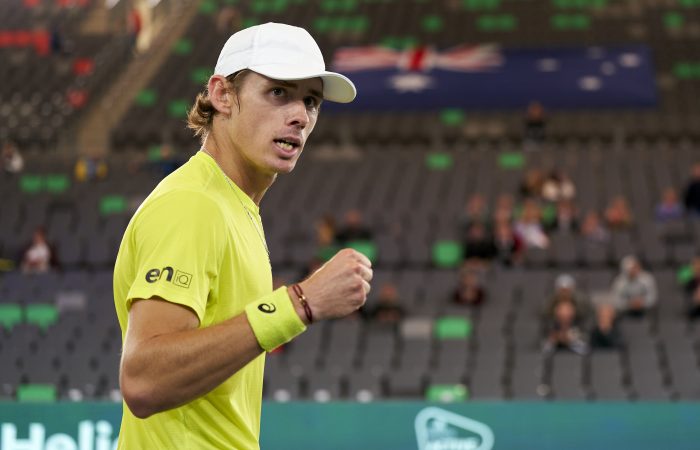 Australia plays the Netherlands in the first quarterfinal on Tuesday 22 November at the Palacio de Deportes Martin Carpena.

“Alex (De Minaur) has had a fantastic Davis Cup record this year. He’s played some of his best tennis in Davis Cup,” Hewitt said.

“He’s gone from strength-to-strength in this competition over the last few years and he’s going to help lead us again in our quarterfinal match against the Netherlands.

“Thanasi Kokkinakis did everything that we asked of him in Sydney earlier in the year against Hungary to get us into the group stage of the Davis Cup finals.

“He was able to win that clincher for us in the fifth rubber, which was massive against (Zsombor) Piros. And then played really well in his last match in Hamburg against Germany, winning that match in the No.1 singles slot. I think he’s got a very dangerous game and especially on the indoor surface.

“Max Purcell played extremely well in Hamburg on debut. He handled the pressure of playing big, important matches and he gelled extremely well with Matt Ebden, who came back into the team obviously after the boys won Wimbledon, their first Grand Slam title.

“The Netherlands are going to be tough,” Hewitt added.

“They came through in an extremely tough group in the Davis Cup in Glasgow during the group stage. We’re going to have to try and make them play a lot of balls out there, try and wear them down.

“It’s not going to be easy, especially in this format of only playing three matches. Hopefully we can get off to a good start against them.

“It’s been a good run so far on the way to the finals, we’ve done absolutely everything but there is still a way to go.

“If we can find a way to get through the quarterfinal stage then it really opens up, it’s a massive opportunity to be only a couple of matches away from potentially holding up the Davis Cup trophy this year, which is a huge goal, not just for the coaching team, myself, Jaymon Crabb and Tony Roche, but also for the players.

“They’ve made a lot of sacrifices to give us the best opportunity to have a crack at the Davis Cup and we’re awfully close this year and want to go out there and make the most of these opportunities.”

Australia and the Netherlands have qualified for the knock-out stages of the Davis Cup Finals alongside Italy, United States, Germany, Canada, Croatia and Spain.