OWINGS MILLS, Md. — The Baltimore Ravens have long treated the biggest storyline looming over the franchise — whether quarterback Lamar Jackson will get a contract extension — as a formality. Team officials have confidently framed it as a matter of when, and not if, a new deal gets done with Jackson.

But for a second straight offseason, there’s no indication that a long-term commitment to Jackson is imminent.

In Friday’s season-ending news conference, Ravens general manager Eric DeCosta said it’s been “an unusual negotiation” because he’s dealing directly with Jackson, who is among the few players in the NFL without a traditional sports agent. DeCosta estimated he’s spoken to Jackson five or six times about his contract over the past year.

“At this point, I would say we’re working at Lamar’s pace,” DeCosta said. “He’s comfortable where we are right now.”

History suggests Jackson will get a deal completed before September. From 2011 to 2017 (the year before Jackson was drafted), eight of the 20 quarterbacks drafted in the first round signed contract extensions, according to ESPN Stats & Information. Five QBs signed extensions before the start of their fourth season (Ryan Tannehill, Carson Wentz, Jared Goff, Patrick Mahomes and Deshaun Watson) and three signed long-term contracts before the start of their fifth season (Cam Newton, Andrew Luck and Blake Bortles).

But, for the first time since Jackson became eligible for an extension last offseason, there appears to be uncertainty on when a deal will get completed.

“We will operate based on his urgency,” DeCosta said.

Here’s a look at the situation with Jackson and where his contract situation stands:

Do the Ravens and Jackson have to reach a deal this offseason?

No, not at all. Jackson is under contract through the 2022 season. He’s entering his fifth-year option. This is the reason why Ravens coach John Harbaugh said there was no hurry for Baltimore to get a deal done last offseason. The biggest difference this year is Jackson’s no longer the best bargain in the NFL. Jackson’s base salary skyrockets from $1.771 million last season to $23.016 million this season.

This is the most disappointing part of Jackson’s first four seasons. Baltimore was only able to produce one playoff victory when Jackson was on his rookie contract and counted $3 million or less against the salary cap. The Ravens would not have the same advantage going forward with Jackson. A new deal is going to take a larger chunk out of the salary cap, which means there will be less money to build a team around him.

What’s the incentive for the Ravens to reach a new deal now?

The biggest plus is an obvious one: The Ravens make sure they keep a top-five quarterback for the foreseeable future. Baltimore has proven it’s a perennial playoff team with Jackson in the lineup. Over the last four seasons, the Ravens are 37-12 (.755) when Jackson starts and 6-10 (.375) when he’s sidelined. An extension also removes Jackson’s contract status from being a distraction. The longer there is no deal, the more times Jackson and Ravens officials will get asked about it.

The best immediate perk for Baltimore is more cap space. Right now, Jackson accounts for 11% of the Ravens’ cap in 2022. A contract extension could cut Jackson’s cap figure this season in half because a new deal would prorate the signing bonus over the length of the deal and include a low first-year base salary. In other words, a long-term deal with Jackson would result in a major short-term cap benefit for Baltimore, which currently has $12.7 million in cap space (which puts the Ravens in the middle of the NFL).

But DeCosta said the Ravens are comfortable with carrying Jackson’s $23 million cap hit if an extension can’t be reached before the season. Jackson’s cap figure would only rank 12th in the NFL, and Baltimore can make other moves (like cutting offensive tackle Alejandro Villanueva) to free up more cap space. “Based on who Lamar is and what he has to offer, that’s not a huge ticket for a quarterback of that ability and of that personality and what he brings to the table for the team,” DeCosta said.

What happens if Jackson is unsigned at this time next offseason?

Jackson would become an unrestricted free agent if unsigned 13 months from now. But Jackson has a better chance of hitting the lottery than he does hitting the open market. If the Ravens can’t get a deal done, they will dust off the franchise tag, which they’ve only used twice over the last decade (kicker Justin Tucker in 2016 and linebacker Matthew Judon in 2020). In theory, Baltimore can place the tag on Jackson for two years. That means the Ravens can hold onto Jackson through the 2024 season without an extension, although it might cost them over $40 million in that final season.

Few teams have used the franchise tag on quarterbacks. In the previous 10 offseasons, only three QBs have been tagged: Drew Brees (2012), Kirk Cousins (2016 and 2017) and Dak Prescott (2020 and 2021), according to ESPN Stats & Information. This shows most teams don’t allow talks to get to the point of the franchise tag because the cost becomes so prohibitive. But, unless Jackson becomes more motivated about contract talks, this becomes more of a possibility with each passing month.

What’s the risk of holding off on signing Jackson this year?

It’s all about the relationship. Business-wise, one can argue that it’s more prudent for the Ravens not to sign Jackson to a multi-year deal. He has taken 64 more hits than any other quarterback since 2018, and he missed the last four games of last season with a bruised bone in his ankle. Going year-to-year contractually could be smarter with a quarterback who has a higher risk of injury.

That’s why it’s odd that Jackson hasn’t been more proactive. It would make sense for Jackson to push for an extension because it provides long-term security for someone who puts his body on the line more than other quarterbacks with his playing style.

The Ravens have been very conscious about maintaining a strong connection with Jackson. DeCosta once said Jackson is the type of person that “you’d be very proud to have as a son.” Jackson feels so comfortable around DeCosta that he used the GM’s initials to nickname him “Every Dollar Counts.” The Ravens want to avoid any animosity over dragged-out negotiations, especially when Jackson doesn’t have an agent.

Does Jackson’s lack of an agent complicate matters?

It certainly doesn’t help matters. Agents often act as buffers, so negotiations don’t become personal and criticisms don’t get taken the wrong way. And, given DeCosta’s comments on Friday, the lack of an agent can slow down negotiations. Some players have brokered their own deals, but it’s rare for a contract the magnitude of Jackson’s. As of last year, Jackson was one of 17 NFL players not represented by a traditional sports agent.

When it comes to contract talks, DeCosta speaks only with Jackson and not his mother or other advisors.

“I’ve always spoke with Lamar, DeCosta said. “It was made clear to me early on in the process that Lamar and I would work together. That’s been the case.”

DeCosta made it clear that the Ravens are open to talking about an extension.

When does a deal get done and how much will it ultimately be worth?

Who knows. You get the sense that the Ravens don’t even have a gauge on when a deal can occur because this is really uncharted territory with the size of the deal and the lack of an agent. Baltimore presumably wants to get this deal done before the start of free agency (March 16) in order to take advantage of the cap relief (the potential of an additional $10 million in cap space) provided by an extension with Jackson and sign more players.

Those in league circles expect Jackson’s payout to exceed $40 million per season, which would make him among the three highest-paid quarterbacks. It’ll be interesting to see if Jackson can surpass Josh Allen ($43 million per season) to rank second behind Mahomes ($45 million per season). The other issue is whether Jackson’s deal will be a shorter-term extension like Prescott (four years) or a longer one like Allen (six years). 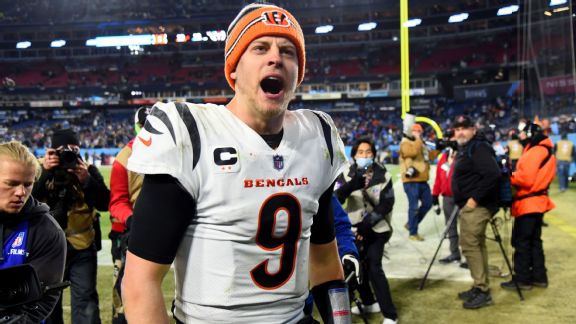 • Toughness: Burrow plays QB like a LB
• Who drafts the most Senior Bowl players?
• Bills have holes to fill in offsseason
• Will Rhule draft former recruit Pickett?
• Can the Jets find their Deebo?

Jackson is coming off a season that isn’t ideal for a player up for an extension. He struggled with the blitz and decision-making (a career-high 13 interceptions). He was also sidelined for the first time due to injury.

But DeCosta said none of that has changed the Ravens’ confidence in Jackson as their franchise quarterback.

“There is a lot of upside with our offense. Lamar is a big part of that,” DeCosta said. “He’s the right person to do it. He’s a leader. He’s beloved. He’s a phenomenally talented player. He makes us better.”