Arato Katsuda-Green, who will compete at the inaugural Australian Blind and Low Vision Championships in Melbourne this weekend, is maintaining faith in his tennis dreams. 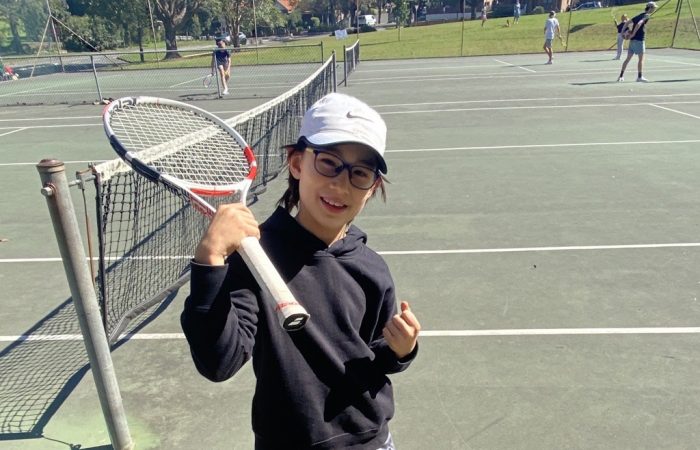 Arato Katsuda-Green loves tennis and that passion promises to carry him a long way, despite the challenges life has thrown at him.

The 10-year-old from Sydney fell in love with the game at the age of four, spending six days a week on court, often honing his skills alongside his mother Junko.

The aim was to hopefully emulate the deeds of his favourite player, Austrian star and US Open 2020 champion Dominic Thiem.

“It was a sport I started playing early with Mum,” said Arato. “I like tennis because it is a very independent sport. You don’t have to rely on others so much.”

But around 18 months ago his coach, Troy McDonald, started to notice changes with the young athlete and it was difficult to pinpoint why.

“He started missing balls, and missing the bounce, hitting over the top of or under balls,” mother Junko explained.

Arato was subsequently diagnosed with Stargardt’s Disease, a rare genetic eye disease that occurs when fatty material builds up on the macula — the small part of the retina needed for sharp, central vision.

Arato’s father, Tim, is extremely familiar with the condition, having been afflicted with Stargardt’s since his mid-20s.

“I developed the condition a bit later than most people do. It’s usually something that develops between the ages of eight and 12 or 13, but I was 25 or 26,” Tim explained.

“Until the age of 25 I had been training to be a triathlete, and my team-mates noticed I had progressively started tripping over things on the road and stumbling a bit.”

At the time Tim was diagnosed, he was told there was practically no chance he would pass on the condition genetically to any children he might have.

“I was told that it’s recessive, and I shouldn’t worry about passing it on,” he said.

It has since been discovered that in very rare cases, some forms of Stargardt’s can be found in dominant genes.

Arato had been tested at the age of six, with those tests coming up normal. But when red flags were raised by his coach, further tests confirmed the presence of the condition.

McDonald, a high-performance coach and a director with the Zone Tennis Academy in Sydney, spoke glowingly about his young student.

“The most talented kid I ever worked with was (former tour professional) Brendan McKenzie, and Arato is every bit as talented but with a better work ethic than anyone else,” McDonald said. “I don’t say that lightly. I have all the time in the world for him and his family.”

McDonald described the moment he knew something wasn’t right.

“Almost with a click of the fingers, Arato just couldn’t track balls in front of him anymore,” he said.

“Knowing the family history helped me understand, but Arato is ahead of his time in terms of wanting to know all the information about it, and all the ways he can keep working to get better.”

That determination will be on show this weekend when Arato competes in the inaugural Australian Blind and Low Vision Tennis Championships at the National Tennis Centre in Melbourne.

Running from Friday until Sunday, the event is one of 13 national and state inclusion events for men, women, and juniors with a disability or impairment to be staged by Tennis Australia between September and December.

“This event will become the pinnacle event in our blind and low vision tennis calendar, attracting both experienced and aspiring young players from all around the country,” said Dew.

“It is also a stepping-stone for some players who will go on and represent Australia at future international blind and low vision tennis events.

“Arato is our No.1 ranked junior player in Australia. He will be competing in both the 18/u and the open divisions, as well as teaming up with his father Tim to play doubles.”

As Arato continues to take challenges in his stride, he is focused on a strong performance in Melbourne.

“I’ve been practising a lot and I’m feeling confident but also nervous, because I think I’m a really good chance and I’m playing well,” Arato said.

Mother Junko is proud of her son’s positive attitude, reflecting on those days spent together on court.

“We started playing every day, and for a while it literally was every day,” she said.

“People would joke that they came past in the morning and again in the afternoon and he was still there playing.

“He was progressing really well, so it was so disappointing for him, but he is still practising and doing so well.”

His father Tim is thrilled his son still has opportunities to pursue his dreams.

“A big shout-out to Tennis Australia for what they are doing,” he said. “Introducing the BLV (Blind and Low Vision) Championships has been fantastic.”