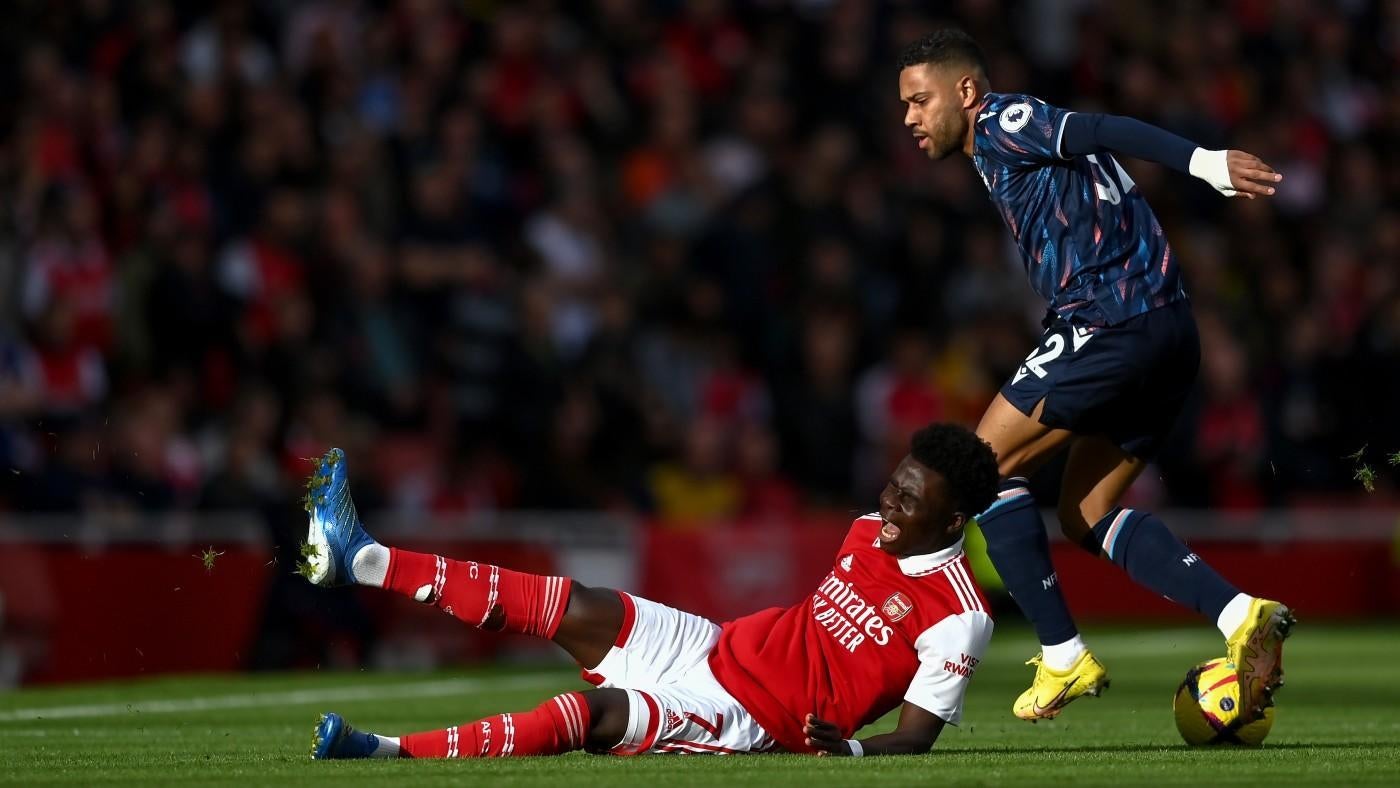 LONDON — In the end it could have been much worse for both Arsenal and Bukayo Saka. The Gunners were able to cope quite easily without the transformative force their No. 7 delivers on the right flank whilst it appeared that the player himself evaded any significant injury in the 27 minutes he completed at the Emirates Stadium.

Certainly Mikel Arteta did not seem to be worrying about Saka’s potential involvement in the World Cup, a tournament on which he could make a major impact based on current form. But whether he would vocalize it or not, it would only be natural if the Arsenal coach were fearing how many more games like today his young star can take.

From minute one it was apparent that Nottingham Forest were intent on imposing themselves on Saka. Renan Lodi flew into his opponent with a tackle whose aftereffects Saka could never quite shake off. He was limping on his way to take corner kicks, lacking the burst to run at his opponent and dropping to the floor almost whenever there was a break in play. A hindered Saka can still be a deadly force, as he proved with the delicate cross that Gabriel Martinelli flicked into the net for Arsenal’s opener in the 5-0 win.

Had he been able to continue he might have had plenty more. Reiss Nelson, his surprise replacement, certainly made hay against a Forest side who their manager Steve Cooper conceded were far from the level needed to be competitive against any team in the Premier League, let alone its leaders. Ultimately it was safer to preserve Saka’s fitness with an eye on next week’s clash against Chelsea and the World Cup that follows soon after.

England fly out for Qatar in a little over two weeks. Asked whether that tournament was in doubt for Saka, Arteta seemed upbeat.

“Hopefully not. It was a bad kick. Right from the beginning he was limping, but I don’t see any further than that. Let’s see how he is in the next couple of days,” Arteta said.

“He got kicked a few times and he wasn’t comfortable.”

Perhaps mindful of the storm that had been created last year when both he and Saka called for more protection from referees for the England international, Arteta swerved a question on whether that support was still needed.

Plenty of Arsenal supporters would question whether he is getting the rub of the green from officials, however. Prior to the game, Saka had attempted the eighth most dribbles in the Premier League and ranked second for touches in the attacking third as well as in the top 15 for progressive passes received. He is a volume ball carrier and dangerous dribbler, a foundational piece of his team’s attack. Those players tend to get fouled a lot.

Wilfried Zaha is a prime example. He has attempted the most dribbles in the top flight this season and drawn the most fouls. Second in both lists is Arsenal striker Gabriel Jesus. It is then notable, though far from a complete aberration, that Saka was just the 33rd most frequently fouled player in the Premier League as of the start of the day. Per 90 minutes he was the victim of roughly as many fouls as center backs Marc Guehi and Wesley Fofana.

What those numbers are missing is the occasions where Arsenal supporters feel that referees have let a foul slide. Southampton adopted a firm approach to defending Saka last week, on occasion it seemed surprising how much of it was deemed fair. Leeds also embraced Hack-a-Sak tactics, twice in the first half Pascal Struijk fouled his winger in a clumsy fashion, one the second occasion going through the back of him, without any more than a foul being given.

Watch back all the 16 fouls that he has suffered and something of a pattern emerges, full backs forcefully hitting Saka from behind, many of them the sort of fouls that hover on the brink of a yellow card. So far only Joao Palhinha and Jordan Zemura have been given them, the latter lucky that was all he got from flying through the back of his man.

None of this is to suggest that Saka is necessarily refereed differently than anyone else in the upper echelon of Premier League wide forwards. Mohamed Salah also occupies the grey area of high dribbling, infrequently fouled players. Even though Saka was booked for a dive against Southampton last week, he often has a tendency to ride challenges where others might hit the deck. One might also suggest that the furore that followed his comments after March’s win at Aston Villa — a match where Tyrone Mings defended him with plenty of force — has developed a perception around Saka that subconsciously makes referees more skeptical over him.

It is not up to officials to protect any players more than others. The top attackers in the best teams are always going to be targets for opponents who may not be able to lay a glove on their man whilst playing within the rules. Equally it should not go unnoted that a player who figures to play a key role for a title contender in the Premier League and World Cup is increasingly the subject of robust treatment. It is only natural for those with England or Arsenal affections to fear what might happen.

On Sunday, Arsenal coped comfortably without him, helped by Nelson fulfilling some of the potential that once had him spoken of in the same breath as Saka at the Hale End academy. His first Premier League goal in 837 days was followed by a second 181 seconds later. Thomas Partey and Martin Odegaard added some luster to the scoreline as the Gunners returned to the top of the table, back to their imperious best. Prior to this season Arteta had spoken of his desire to see his side score 90 to 100 goals for the season. With nearly a third of it played they are on course for 95.

“We certainly have been creating the chances to score,” said Arteta, who had seen his side draw with Southampton and lose to PSV Eindhoven before this match. “We have not been hitting the target enough and we have discussed that all week.

“Today the individual talent made the difference. They scored some fantastic goals. And they shared the goals, which I think is important as well.”

Forest might have taken Saka out of the game but they had no answers for Martinelli, Odegaard, Jesus or a resurgent Nelson. That is perhaps the best insurance policy that Arsenal can have. This team that were once extremely reliant on their young forward can now put opponents to the sword without him.