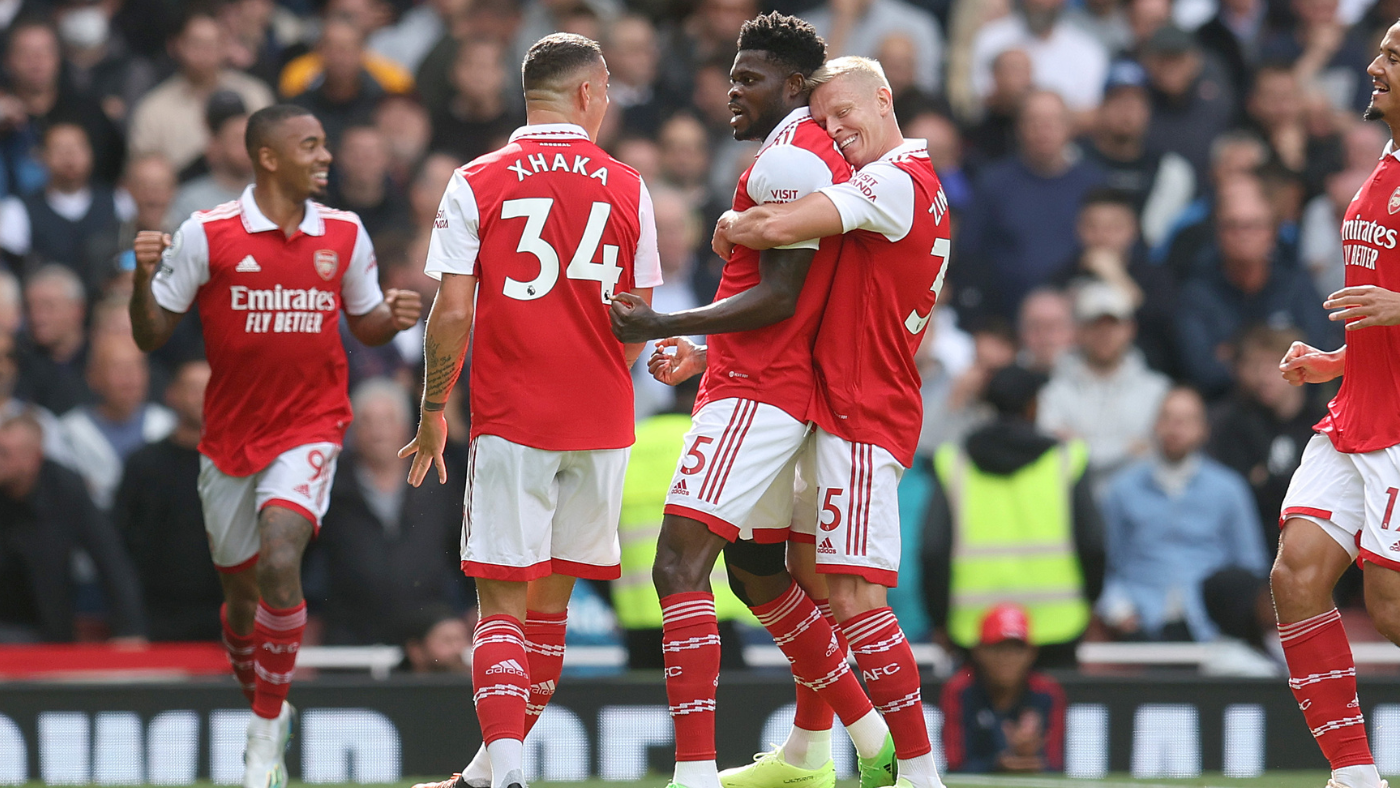 Arsenal have ensured that they’ll spend yet another weekend atop the Premier League after an emphatic 3-1 win over Tottenham in the North London derby. A stunner from outside the box by Thomas Partey was canceled out by a Harry Kane goal for an even first half but Arsenal pulled away in the second period scoring either side of a red card shown by referee Anthony Taylor to Spurs defender Emerson Royal. Mistakes are punished in derby matches, and Saturday it was Spurs who let the occasion get to them.

A howler from Hugo Lloris gifted Gabriel Jesus a goal in the 49th minute and Arsenal wouldn’t look back from there. It was a physical match with both teams walking the of unfair play and generally getting away with it until Emerson Royal’s challenge on Gabriel Martinelli ended up getting him sent off. It was a rash tactical foul, with Emerson going in quite high, the kind of prototypical “orange card” offense that sometimes ends in a red but often leads to a yellow card. Today, however, Taylor’s rope had run out. It’s always up to the player to avoid giving a referee a decision to make in these scenarios, and Arsenal showed Spurs why it’s so critical not to make dumb mistakes. It would only take four minutes for Arsenal to make Tottenham pay.

A resurgent Granit Xhaka got onto the end of a cross from Martinelli to put the Gunners up by two, forcing Antonio Conte into a quadruple sub to save players like Heung-Min Son and Richarlison for midweek fixtures. After defeating Leicester City 6-2 before the international break, the hope was that Tottenham would bring momentum through the time off and into this headline match, but it wasn’t to be as their struggles at the Emirates will continue. Spurs haven’t won at Arsenal’s home since November of 2010 and that wait will continue while the Gunners move closer to establishing themselves as title contenders.

Heading into the season these two teams were expected to battle for fourth place in the Premier League, but with Arsenal now on 21 points through eight matches, they’ve already opened a four point gap on their North London rivals. Even with injuries to key players like Martin Odegaard and Oleksandr Zinchenko at various points this season, Arteta has been able to get results while on Saturday Conte’s side was clearly missing Dejan Kulusevski from their counterattack. Kulusevski picked up a knock while on international duty for Sweden but for Spurs’ sake, hopefully, he’ll be back in the rotation sooner than later.

Expectations are rising for Arsenal by the week. After suffering a setback against Manchester United in their first true test of the season, Arsenal were able to bounce back and sweep Brentford aside. With a victory in the North London derby, the Gunners have now collected a marquee victory ahead of a busy period of soccer. Arteta has done a good job of getting players like Fabio Vieira and Marquinhos — who he will need during this run — playing time. That will only help Arsenal balance Europa League commitments while keeping the pressure on Manchester City chasing them. With depth players rounding into contributors, it’s hard to keep them out of the pack that could win the Premier League title.

What’s the backup plan for Spurs?

When the counter attack works for Spurs, it can be an absolutely dominant mode of attack, but against top teams, it has fallen flat so far this season. Conte is happy with letting the opposition control possession, since his team is composed enough to keep shots allowed in low percentage areas. But when a team has a player as good as Partey to break that, Spurs need to have another plan.

When Arsenal grew in confidence, Spurs struggled to put their foot down to push possession. Royal has been important defensive cover, but his limitations going forward leave Conte in a tough spot. Matt Doherty and Djed Spence haven’t been used much this season but each should offer more of an attacking threat if Conte trusts his center backs to defend on an island. Conte also hinted to possibly using a 3-5-2 to gain more control in midfield in his prematch presser and if he doesn’t want to change his right back, dropping an attacker to do that makes sense. With five subs available, it even gives Spurs options for fresh legs off the bench which was needed on Saturday.

The battle of the nines

Gabriel Jesus and Richarlison are battling for the number nine shirt for Brazil at the World Cup and they’re giving Tite tough decisions. Richarlison won a penalty that Kane converted for Spurs’ only goal of the match while Jesus’ work-rate shined as he nabbed a goal. Both players are happy to drop in and defend as well, making them hard to split. Heading into the season, Jesus was expected to get more playing time but Richarlison has made himself indispensable for Conte as his hunger to stay in the starting lineup has forced Conte to give him minutes. Brazil will be tracking what the duo does but it could be a decision that comes down to the final days before the World Cup.