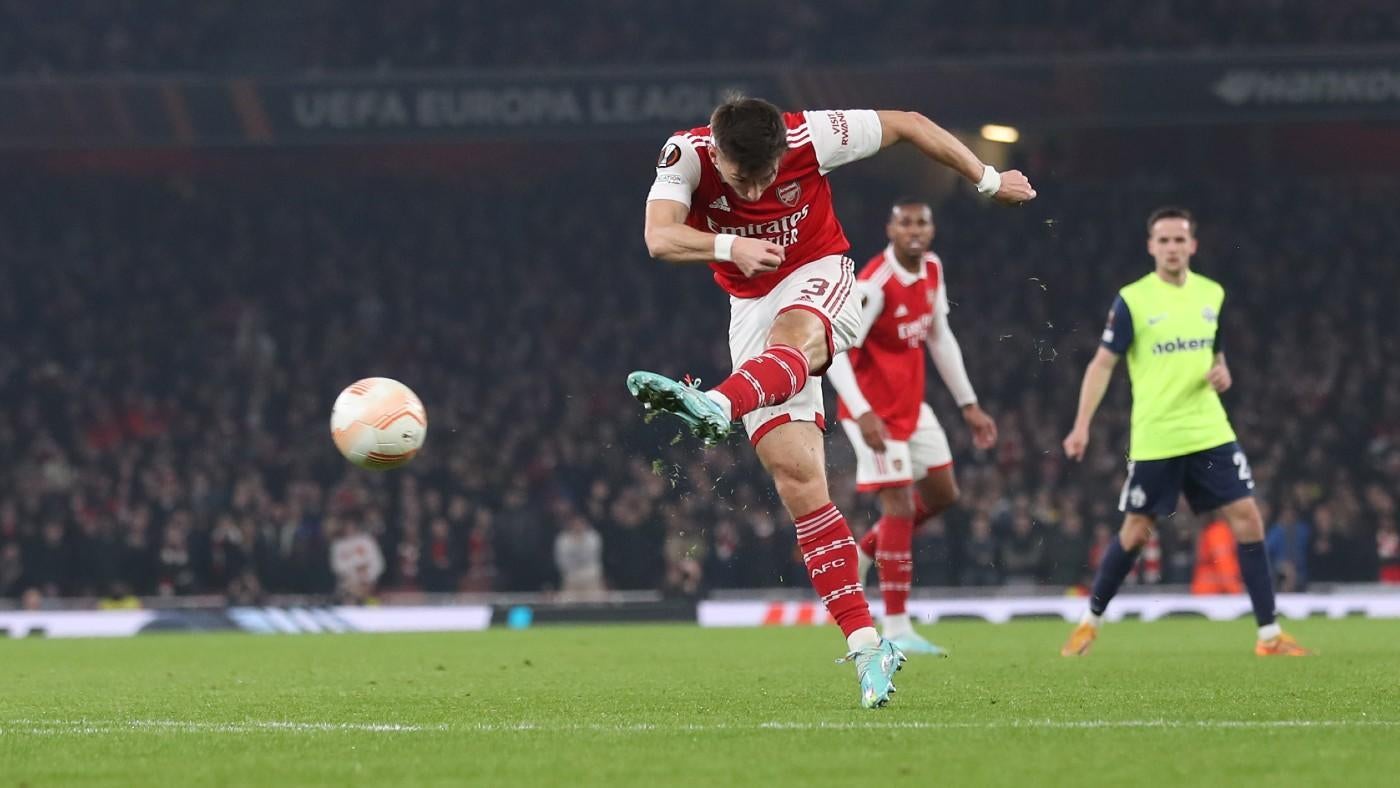 LONDON — Arsenal scraped into the Europa League round of 16 as Kieran Tierney’s thumping first-half volley carried them to a nervy 1-0 win over a belligerent Zurich.

Three points assured Mikel Arteta’s side of top spot and with it a bye past what is shaping up to be a challenging knockout round for those who finished in second place in this competition’s group stage as well as the third-placed teams from the Champions League. One might have thought any collection of players in red and white would have dominated a side ranked bottom of the Swiss league but a side containing the likes of Gabriel Jesus, Gabriel and Aaron Ramsdale made heavy work of earning three points against an opponent who were not afraid of leaving their mark on the Gunners.

Arsenal began in skittish fashion under the fog from half a dozen flares let off in the Zurich away end. A string of early corners gave the visitors a glimmer of hope that they might secure the victory that could propel them into the Europa Conference League. Ultimately though they lacked the guile to seriously test their hosts in the final third, though Aaron Ramsdale did have to save smartly when Jonathan Okita’s strike deflected off Mohamed Elneny.

By that time Arsenal were already in the lead, Tierney thumping home from outside the box after Fabio Vieira’s initial effort had been blocked. The left-back, once labeled a future club captain, has struggled to establish himself in Mikel Arteta’s Premier League XI this season; it speaks to the bond that this squad has built that Ramsdale came charging up to the halfway line to embrace his teammate.

But for the excellent goalkeeping of Yanick Brecher, Arsenal could have been out of sight soon after halftime. A diving parry denied Eddie Nketiah when the striker had already begun celebrating his goalbound header. Gabriel Jesus, meanwhile, saw his goalless run stretch to six games as the Zurich shot-stopper made himself just big enough to deflect the Brazilian’s sidefooted effort with his bicep.

The concern for Arsenal was not so much that PSV Eindhoven were cruising to victory at Bodo/Glimt but that whilst there was a scintilla of hope for Zurich the visitors would scrap and claw for every inch, quite literally on occasion. Tierney was forced to don a new jersey after Nikola Boranijasevic claimed a chunk of it well before the final whistle, a more traditional occasion for the exchange of clothing.

Not that Zurich and their boisterous supporters were in any rush for the final whistle to come. This was the past iteration of the Emirates, all skittishness, expecting the worst. For a heartbeat, it looked like it had come when Ramsdale parried Antonio Marchesano’s effort out to Adrian Guerrero, who tapped home the rebound. The worst Switzerland’s top flight had to offer, for a moment in ecstasy against the Premier League leaders. Jo de Weirdt’s offside flag was manna from heaven.

Even the introduction of a quartet of Arsenal’s best and brightest — Bukayo Saka making a swift return from the injury he suffered against Nottingham Forest on Sunday — could not quell Zurich’s late exuberance. Bohdan Viunnyk bent wide from range as crosses flew into an Arsenal penalty area once more engulfed in the smoke being emitted from the away end. To the last this was more difficult than it ever ought to have been, the game’s final act a free kick from wide flicked over the bar.

Victory was secured but at a cost. First Takehiro Tomiyasu set Japanese pulses quickening ahead of the World Cup as he limped off 15 minutes after coming on. Then Tierney, match winner at both ends, suffered a nasty blow to his ankle in cutting out a Zurich break. With Oleksandr Zinchenko back in the squad and Ben White in outstanding form, Arsenal should just about have the numbers to cope with Chelsea on Saturday, but they will need to be better than they were today. Still, at least they have wiped two possible games off this most grueling of calendars.