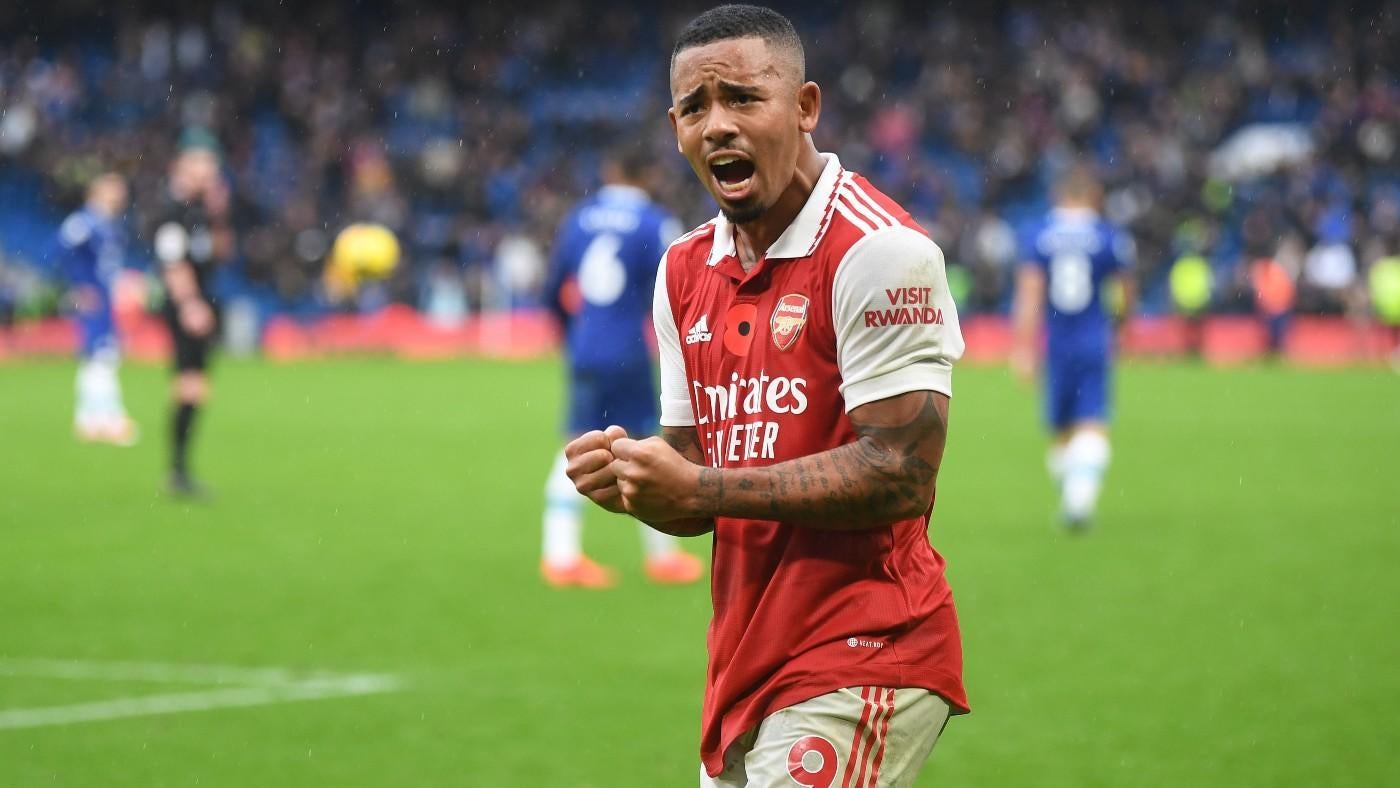 LONDON — The torrent that engulfed Stamford Bridge in the hours before kickoff on Sunday was little more than a light smattering compared to the tempest that blew through west London for 90 minutes later in the afternoon. The biblical torrent led by Gabriel Jesus washed Chelsea away, the heavens open for Arsenal once more as they returned to the summit of the Premier League.

They look good there. No one seriously believes that this will last for another 25 league games. Sooner or later Manchester City will overtake them but they will have to do extremely well to pull away from them. Led by their remorseless front three, Arsenal will not let go of anything once they get their claws in.

That much Edouard Mendy and company can attest to. Arsenal’s front three harassed him and the Chelsea byline, giving them barely a second to check their angles and build out from the back. It was all Thiago Silva could do to hoof the ball into the middle distance, where Gabriel and William Saliba were on hand to send it right back.

That is of course if they could get the ball that high up the pitch. Only one player in Chelsea blue bettered the six ball recoveries of Bukayo Saka and Gabriel Martinelli. Jesus won a brace of tackles and registered the same number of interceptions, again as many as any opponent. He could even be found back in his own third clearing the ball to safety. William Saliba deservedly won the man of the match ball for his shackling of the Chelsea attack but a defensive player of the game prize could have gone to almost any player in this side.

Mikel Arteta is not always a manager to get carried away in his praise of individual players or a select group, preferring to focus on the collective (or indeed the supporters that he contended “have transformed the club”). But he could not help himself when asked to reflect on the off-ball work of his front three.

“They’ve been phenomenal,” he said. “They have a real willingness to do it. They are capable physically now because they are a bit more mature to do it and sustain it. The difference is about demanding them to do it and them feeling what they’re doing and how important and beneficial it is.

“Starting with Gabby [Jesus]. What he did today was phenomenal. Do they enjoy it? Yeah, you have to,” Arteta said.

For Arsenal, defense started from the front. For Chelsea, there were two papier-mache thick lines to work through before anyone actually looked capable of stopping their opponents. If this was partly tactical — there seemed to be a deliberate strategy to let Oleksandr Zinchenko gravitate infield with Raheem Sterling primed to attack the space he left behind — there was as much that could be laid at the feet of individual players who lacked the intensity for today’s encounter.

Pierre-Emerick Aubameyang had said before the game that whatever happened was “nothing personal”. That much was apparent. He did not play like a man with a point to prove against the team who had paid him to play somewhere else, the manager who had laid the blame squarely at his door for the falling out that cost him the Arsenal captaincy a year ago.

For a moment in the first half it seemed Chelsea had Ben White trapped just inside the final third, Marc Cucurella paired alongside Aubameyang. Arsenal’s right back stepped infield towards the No. 9, who offered no resistance. Into their build-up play went the Gunners, who spent so much of this match running rings around an opponent who they now hold a 13-point advantage over.

The same difficulties were suffered by Kai Havertz. Where Arsenal defended as a unit, Potter seemed to have left his forwards out of the defensive work. That could be justified if the forwards proved to be killers with the ball at their feet. Nothing could be further from the truth.

Almost all of Aubameyang’s eight clumsy touches, just two in the penalty area, were cheered to the heavens by the boisterous away end. His one shot was a tame effort skewed into an opponent, a chance to capitalize on a rare Saliba mistake spurned. Havertz was among the chief beneficiaries of the space Zinchenko left down the left but when he was given the opportunities to attack it he would mishit his crosses or fire too close to Aaron Ramsdale. There is a player of prodigious talent in there but questions have to be asked as to whether he is showing it consistently enough to justify a system that seems designed to maximize his qualities as a second striker, seemingly at the expense of a midfield that looks undermanned and overrun.

There is more to this than the individual, however. Arteta has had 150 games, 89 of them wins but with plenty of setbacks along the way, to get Arsenal rolling as they were today. Potter has had eight weeks, few of which have included significant time on the training pitch.

“We huffed and puffed I thought,” the Chelsea head coach acknowledged. “You can see the difference between the two teams in terms of the confidence, points they’ve got, structure and work together.” Those latter two facets ring true. Potter constructed tactically shrewd sides at Brighton but it took time, just as it will in west London. There were no moments where Chelsea clicked through a passing move as Arsenal did on the way to a curling effort from Gabriel Martinelli in the first half. The Gunners have learned where their teammates will be at all times, with injuries addling them Chelsea are still unsure who is supposed to be where at any one time.