While the highs of a spectacular 2021 keep coming, world No.1 Ash Barty is already hard at work ahead of the new tennis year. 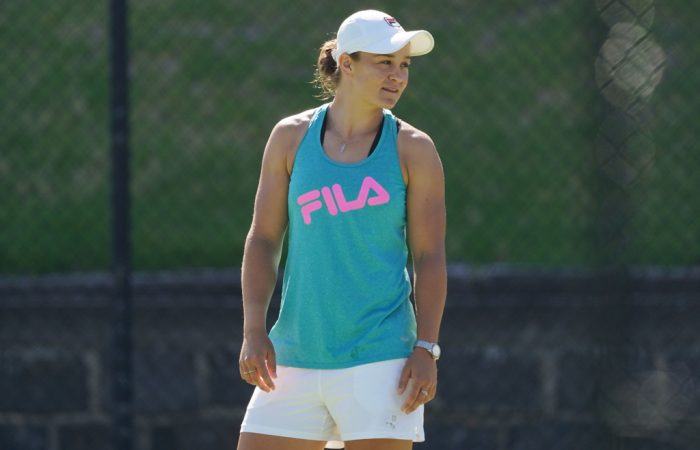 With a Wimbledon trophy gleaming alongside her tour-leading five titles, there was much to celebrate in Ash Barty’s transformational 2021 season.

And the highs kept coming in the world No.1’s return home to Australia, with Barty recently announced as Tennis Queensland’s Athlete of the Year.

“It was an honour to win the Ashley Cooper Medal,” said a delighted Barty. “I’m a proud Queensland athlete, so being recognised in my home state is always special.”

The latest milestone added to Barty’s unmistakable joy in a well-deserved break with family and friends, before the hard work of preparing for a new year on tour began.

“It’s definitely been nice to have some time at home after such a long year,” said the 25-year-old, who announced her engagement to long-time partner Garry Kissick last month. “I did feel rested until preseason started a few weeks ago!”

Not that a return to the court is always a toll for the long-time world No.1.

“I’ve still been training every day but have managed to have quality time with family and friends,” Barty related, who has cherished the opportunity to pass on her world No.1 tennis knowledge to a special group.

“I’ve been coaching my niece Lucy and a few of her friends every weekend which has been fun, seeing the smiles on their little faces when they play is what the sport is all about,” she said.

The reward of hard work is one of many lessons that Barty could share at her local club.

“This week, tired!” Barty admitted when asked how she is feeling after resuming her training.

“I’ve been working hard on and off court, doing everything I possibly can to get ready for January. The first few weeks of preseason are always tough physically.”

The many highs of 2021 make the challenges worthwhile for Barty and her team. Leading the tour at the top of the rankings from start to finish, the popular competitor finished as year-end world No.1 for the third season in a row.

A year in review!

Check out the top moments and memories of the 2021 season!💜⬇️

“I am proud I was able to finish the year at No. 1, especially after the challenging and unpredictable season,” related Barty, who experienced her longest-ever stint on tour.

“Being away from home for so long was really tough for not only me but my whole team, everyone made sacrifices which I’m very grateful for. We went into 2021 knowing it was going to be an adventure and it definitely was, I wouldn’t change it.”

Barty acknowledges the responsibilities that accompany her status at world No.1. Among issues that currently hold her attention is the worldwide concern for former world No.1 doubles player Peng Shuai, a winner of two Grand Slam titles with Chinese Taipei’s Hsieh Su-wei.

“We are all thinking of Peng Shuai and hoping she is okay,” Barty commented. ”Peng Shuai is part of the tennis family, she has been on the tour for a long time and is someone we all know and respect. The most important thing right now is that she is safe.”

Long known for the qualities that make her one of the game’s most admired competitors, Barty also highlights the strong personal values she will always maintain.

“Being the world No 1 is something I am very proud of, but my ranking doesn’t change the way I am,” she said. “I try and be a good person and do the right thing, regardless of the number next to my name.”