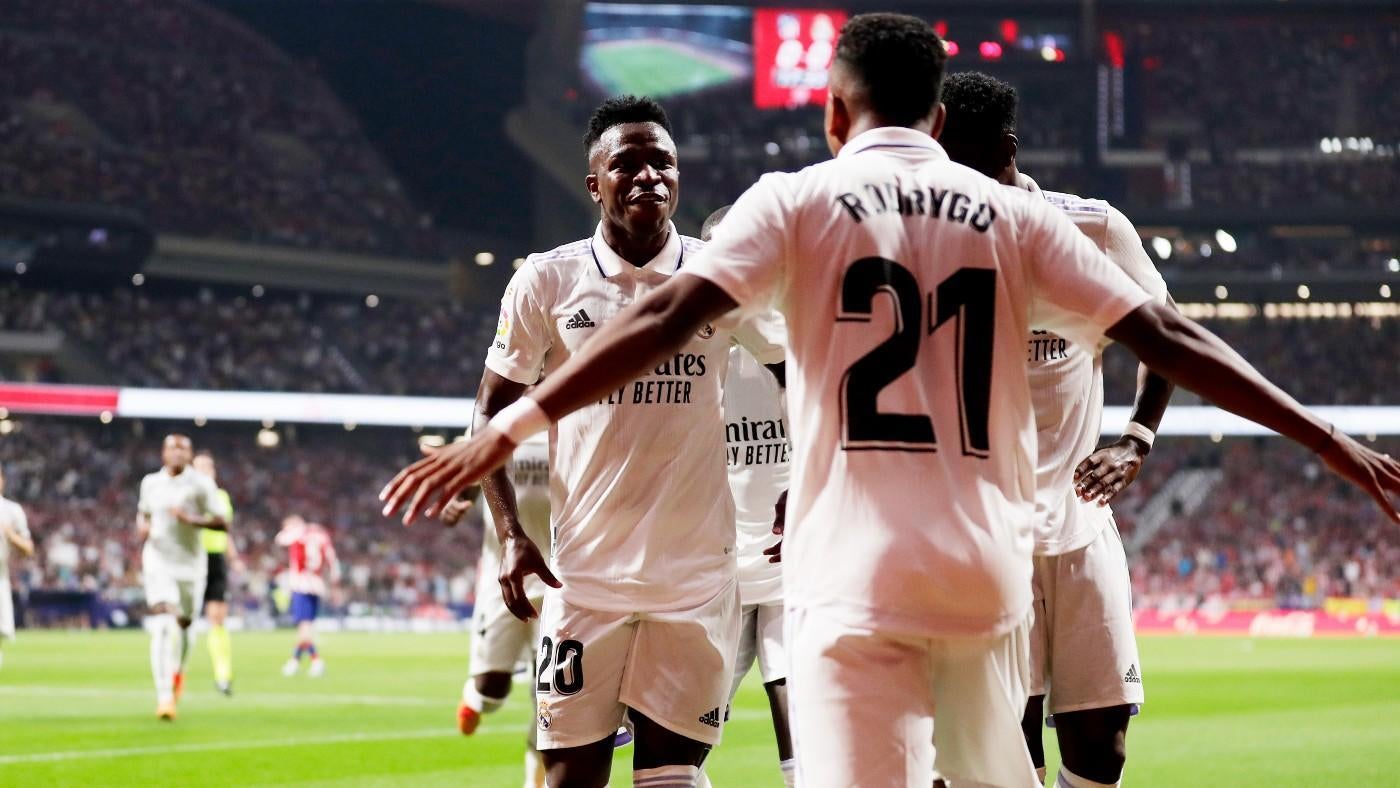 The Madrid derby wasn’t short on drama as the Wanda Metropolitano saw Real Madrid beat Atletico Madrid on Sunday, 2-1. But it was another sad day for the sport with racist chants being heard clearly outside the stadium before the match.

After Real scored two goals in the first half via Rodrygo and Fede Valverde, they managed to hold on fairly comfortably despite Mario Hermoso getting a goal back late on.

Los Blancos have won every match that they’ve played this season, and they backed up their defense of Vinicius Junior after Koke spoke out about his dancing ahead of the game. Vini Jr. even received abuse from some Atletico Madrid fans upon entering the stadium with chants of, “You are a monkey, Vinicius you are a monkey.”

The topic of Vini Jr’s dancing spiraled out of control a bit before the match, but this was obviously crossing the line by a wide margin. La Liga or Atletico Madrid haven’t done anything about the chants as of yet. Vini Jr would have the last laugh though, helping his team beat their rivals.

“There’s no room for racism, and it’s really bad that those chants happen and obviously, it can be a minority of fans but this is racism and we need to call it like it is,” Real Madrid goalkeeper Thibaut Courtois said after the game. “I hope that someone can find out who those people are, there are cameras everywhere and some people don’t understand what they’re saying. That’s a problem. Like even for me, there’s nothing racist to me, but if you stand behind the goal and hear what I hear every game, it’s not nice and there are kids with their parents insulting me in the worst way.”

“What education is this for your kids? I think this is the problem, the major problem of the stadium is this because it feels like when you come to a stadium you can say whatever you want without any consequences, and if it’s racism and it’s heard by cameras or mics then maybe you can do something about it. But otherwise, people from the stadium throw things, they shout disturbing things and that’s a big problem. So it’s all about education.”

Rodrygo opened the scoring for Real Madrid in the 18th minute playing as the striker while Karim Benzema missed another match due to injury. After playing the ball to Aurelien Tchouameni, the midfielder got the ball over the top of the defense to a streaking Rodrygo for the opening goal. After scoring, Rodrygo and Vini Jr came together for a samba dance in the Metropolitano.

It was incisive passing by Tchouameni as he has helped Real Madrid move on seamlessly from Casemiro. Roaming the center of the park, Tchouameni was able to get forward for passes like that while winning a tackle, making six clearances, and winning two interceptions. Involved in every phase of play, Tchouameni has been a strong addition to the squad while allowing the front three to cook the opposition.

Valverde then scored goal was pretty good off of Vini Jr’s shot off the post as he scored for the third game in a row.

Jan Oblak was expected to miss the match due to injury and he may have wished that he wasn’t present as two of the three shots on target that he faced reached the back of the net. On Real Madrid’s second, Vini Jr beat him at his near post before Valverde knocked it home. He wasn’t helped much by his defense as Atleti missed more tackles than they completed but this is part of why Atleti are struggling so much on the season.

Sitting seventh in the league, Atletico Madrid have allowed six goals in six matches, not keeping a clean sheet in their last five in all competitions. Diego Simeone expects his team to challenge for the top of La Liga every season but trailing Real Madrid, Barcelona and Real Betis by five or more points already, Atleti will be lucky to challenge for a Champions League place let alone get into the mix for the title if they don’t clean things up.

Real Madrid are an interesting team because it feels inevitable that they’ll find a way in matches. Atletico Madrid took more shots at 12 to six while also winning the xG battle 0.89 to 0.79, but the only number that matters is the 2-1 score in favor of Los Blancos. Carlo Ancelotti is one of the best man managers in the world, trusting his players to make the right decision, and when you have the quality that Real have on the pitch, that’s pretty easy to do. Performing without Benzema, his Real team weren’t pulled into the occasion by getting players sent off in the brawl that Dani Carvajal ignited due to his tackle on Angel Correa.

Vini Jr didn’t even cause an outburst after he was pushed to the ground by Axel Witsel while trying to show up Atleti with a rainbow attempt. A good mix of petulance while still keeping their heads, Real Madrid seems capable of brushing off any opponents that they may face. With the surprise of the season Osasuna up next followed by Shaktar Donetsk, Real Madrid should be able to keep the good form going as well.