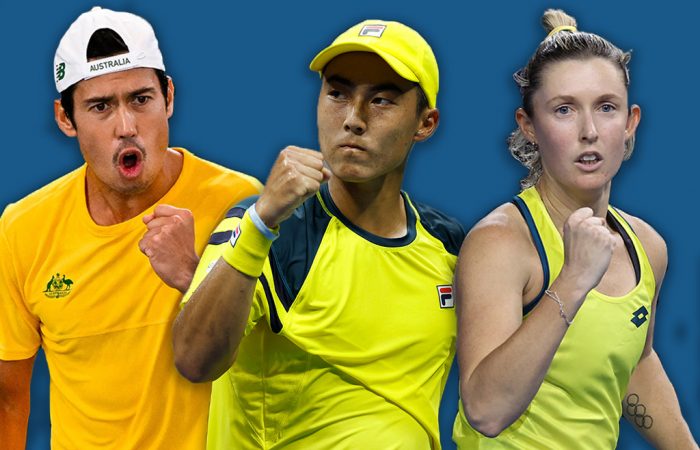 The six Aussies will take their places among the 128-player singles fields at Melbourne Park for the season’s first major tournament, set for 16-29 January 2023.

While Popyrin has already twice reached the third round of the Australian Open, the other five wildcard entrants are seeking their first singles wins at their home Grand Slam.

Hunter (nee Sanders) came extremely close at AO 2022 when she led Aryna Sabalenka by a set and a break at Rod Laver Arena before the No.2 seed lifted to win in three sets.

“I’m super excited to receive a wildcard into the Australian Open,” said Hunter. “Thank you to the Tennis Australia team for this amazing opportunity. I’m incredibly grateful to have the chance to play at home and want to continue playing at the level I was able to play at during the Billie Jean King Cup.”

The 28-year-old lefty enters the new season full of confidence and with increasing experience at the top level, possessing a potent game that no player will want to face in the opening round.

So too does Hijikata, the talented 21-year-old who energised the night-time Arthur Ashe Stadium crowd when he took the opening set off Rafael Nadal at the US Open in 2022.

The Spanish legend went on to triumph in four sets, but it was nevertheless an impressive Grand Slam debut for Hijikata, who this season slashed his ranking from world No.375 to No.164.

He was able to do so by winning more than 50 matches and reaching four finals on the lower-tier Futures and ATP Challenger circuits.

“I’m really grateful to Tennis Australia giving me the opportunity to compete at my home Slam,” Hijikata said. “It’s a tournament I’ve watched since I was a kid and always dreamt of one day playing. It’s going to mean the world to me to step on court in front of a home crowd and leave it all out there and hopefully do well.”

Fellow young-gun Gibson will be making her major debut at Australian Open 2023, and like Hijikata also won 50 matches on the secondary ITF circuit.

The 18-year-old, who was named Female Junior Athlete of the Year at the recent Australian Tennis Awards, began the 2022 well outside the top 1,000 but has soared to a high mark of world No.342.

She collected three ITF tournament trophies in 2022, the first professional titles of her blossoming career.

“It feels amazing, I feel very honoured and grateful to receive a wildcard into the main draw of a Grand Slam for the first time,” Gibson said.

“It’s always been a dream of mine to play in a Slam and it’s such a special feeling to know that I’ve been given an opportunity to do this in my home country at the Australian Open. The wildcard means so much to me and my development because I feel that the work my coach and I have put into developing my game throughout the year has been recognised.”

Kubler, meanwhile, enjoyed breakthroughs of his own in the same time span.

The highlight was his first trip to the second week of a major, which he achieved at Wimbledon after coming through the qualifying rounds. He also reached the second round at both Roland Garros and the US Open.

“I’d like to thank Tennis Australia for this opportunity. It’s very special to play in my home Slam, in front of my friends and family,” Kubler said. “I’m looking forward to what this next Australian Open has in store for me.”

Popyrin, who advanced to the last 32 at Australian Open 2019 and 2020, will hope a return to a happy hunting ground in Melbourne will kick-start a rankings re-ascension.

He nevertheless enjoyed strong results on the ATP Challenger tour in 2022, winning the Bordeaux title, reaching grass-court semifinals in Nottingham and Ilkley, and closing his season with another semifinal run on indoor hard courts in Roanne.

“I can’t wait to play at the AO and am so grateful for the opportunity. It’s so special to play in front of the fantastic crowds in Melbourne and I’m looking forward to getting out there and doing my best,” Popyrin said.

“I hope to learn more about the physical and mental aspects of tennis from this opportunity but I also want to enjoy the experience and have some fun.”

Gadecki, 20, will make her main-draw debut at the Australian Open after falling in the second round of qualifying in 2021.

The Queenslander was another Aussie youngster to make gains on the ITF circuit in 2022; she reached three consecutive finals on the Australian Pro Tour early in the year and in June won two rounds of qualifying to reach the main draw at the WTA event in ‘s-Hertogenbosch.

She reached the semifinals in her last event of the year in Sydney to close the season with an impressive win-loss record of 37-18.

“I’m super excited to play my first main draw Grand Slam here in my home country. I would like to take a moment to thank everyone at Tennis Australia for believing in me and awarding me this opportunity,” Gadecki said.

“It’s something I’ve dreamt of since I was a little girl and I can’t wait to play with my heart on my sleeve in front of a home crowd.”

This boosts the number of Australians currently in the Australian Open 2023 men’s singles field to eight.

More wildcard recipients will be announced in the lead-up to the tournament.