Matthew Ebden and Max Purcell were among many Australians to record memorable results at Wimbledon 2022. 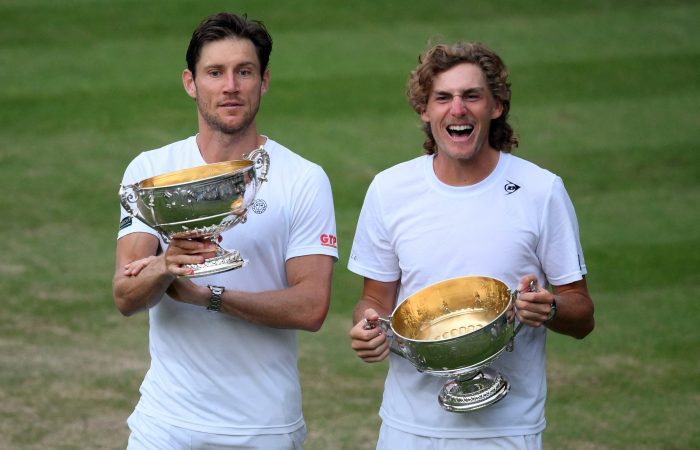 As the last ball was struck at the 2022 Championships, Australian tennis could celebrate a collective success.

While Nick Kyrgios had made a headline-grabbing run to a first Grand Slam singles final, Matthew Ebden and Max Purcell fought brilliantly to become the first all-Australian winners of a Wimbledon doubles title in 22 years.

There was also another standout performance in mixed doubles, where Ebden and Sam Stosur were the first all-Australian finalists since 2004.

Introducing our 2022 #Wimbledon champions and runners-up 🏆

The signs that it would be a special Wimbledon for Australian tennis had occurred weeks before. Six Australians earned entry into the main draw of the prestigious Grand Slam through qualifying, marking the most successful Wimbledon qualifying campaign for our nation in 27 years.

It was a hard-earned milestone for some players, with match points saved and some come-from-behind-victories along the way. For world No.209 Purcell, it was a rare occasion of competing over five sets.

“It’s a different experience, trying to figure out your way and how your body’s going to work for five sets and mentally knowing that two sets up and you have to win one more,” said Purcell after overcoming No.13 seed Nuno Borges in four sets to take his place in the main draw.

“I think I dealt with it really well when I played. I was a set and a break down, but I just thought, ‘you know, just make it as tough as I can for this guy’.”

Resilience developed in their broader careers served those players well. Fourlis, who saved match points in her first qualifying match, is finally in full health after career-threatening shoulder injury. Zoe Hives had battled even harder to simply compete in qualifying, following years-long absences through energy-sapping illnesses.

The 25-year-old Victorian won consecutive matches for the first time since 2019 to earn a main draw debut. “I just can’t believe that I’m actually here,” beamed Hives as she experienced the prestigious All England Club for the first time. “The whole experience is kind of overwhelming, but in a good way.”

Former world No.1 junior Kubler arguably provided the feel-good story of the 2022 Championships. The 29-year-old Queenslander, who had endured five knee surgeries since reaching the semifinals of the 2011 Wimbledon boys’ tournament, won six consecutive matches in 2022.

He came from qualifying to make a maiden fourth-round appearance at a major tournament. Kubler’s inspiring run included an opening-round win against No.28-seeded Brit Dan Evans and a five-set victory against former world No.8 Jack Sock in the third round.

“I wasn’t expecting anything like this,” said Kubler, who soaked up the experience of competing on Wimbledon’s No.1 court. “The fact that I was in fourth round and playing pretty well, especially against great players, it’s only a positive.”

Alex de Minaur also progressed to the second week in a career-best run. Motivation was high for the top-ranked Australian, who noted the significance of competing at the historic event. “It’s history, it’s heritage, it’s culture, it’s tradition,” said De Minaur. “The objectives are countless when you’re describing this magical place.”

Ajla Tomljanovic eliminated two top-20 seeds in her charge into the ladies’ singles quarterfinals, becoming the first Australian woman to reach consecutive quarterfinals at the All England Club since Jelena Dokic in 2000.

“After some tough moments this year, I wondered if I was ever going to get a chance again,” said Tomljanovic. “I can’t believe a year later, I’m in the same position.”

Kyrgios was the first Australian man to reach a gentleman’s singles final in 17 years, with his headline-grabbing performance including victory over No.4 seed Stefanos Tsitsipas in the third round.

There were also multiple five-set victories for Kyrgios, who at world No.40 was the lowest-ranked man to reach a Grand Slam final in 16 years. “I never thought I’d be here to be honest,” said the 27-year-old, who had last reached a major quarterfinal at Australian Open 2015.

But the gentlemen’s doubles provided the greatest success, with Ebden and Purcell combining to become the first all-Australian champions since the start of the century. The Aussie duo saved eight match points in their progress to the final, with five of their six matches in total claimed in five sets.

“To know we’ve won Wimbledon … I was like, ‘If life’s done, I’m done. I’m good’,” said Ebden, who had never previously progressed beyond the second round in seven previous appearances at the tournament.  “It’s just an unbelievable feeling. I can’t believe it.”