A strong Grand Slam season from the Australian playing contingent has laid the foundation for an exciting Australian Open 2023. 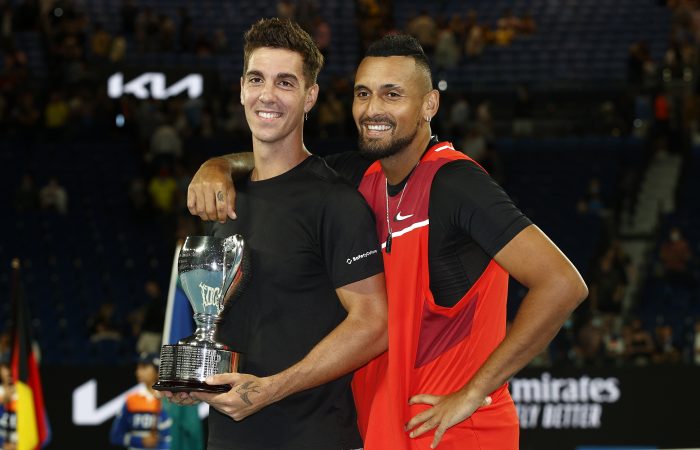 Seven Australian players claimed Grand Slam titles in 2022, the most to do so in almost five decades. A further 13 contested major finals in one of the most successful seasons in Australia’s proud Grand Slam history.

Canberra’s Nick Kyrgios posted career-best results at Wimbledon and the US Open, knocking out top five-ranked opponents at both events. His headline-making run at the All England Club made him the first Australian man to reach a Grand Slam singles final in 17 years.

But the 27-year-old’s career-best year began at Australian Open 2022, when he partnered with Thanasi Kokkinakis to win the men’s doubles title. The wildcard pairing eliminated four seeded teams in an electrifying run to become the first all-Australian champions at the tournament in 25 years.

Kyrgios and Kokkinakis have both since broken into the world’s top 20 in doubles and established themselves as one of the world’s best teams.

This confidence-boosting performance has also translated to singles success. Kokkinakis rose to his highest singles ranking in seven years, while Kyrgios returned to the world’s top 20.

The Special K’s beat Matt Ebden and Max Purcell in the first all-Aussie men’s doubles decider at the Australian Open since 1980 and attracted the biggest audience for a men’s doubles final in Australian television history.

That was only the beginning for Ebden and Purcell, who claimed their first Grand Slam title as a team at Wimbledon — the first all-Australian champions at the tournament in 22 years. They bravely saved match points in two matches during their title-winning run, a tournament first.

Alex de Minaur and Jason Kubler enjoyed career-best runs at Wimbledon too, reaching the fourth round.

With Ajla Tomljanovic also progressing to that stage in the ladies’ draw, it marked Australia’s best result at the tournament since 1999.

De Minaur, who was Australia’s top-performing man with a maiden fourth-round appearance at Australian Open 2022, remains a top-30 force, while Kubler has re-established himself inside the world’s top 100.

Like Kyrgios, Kubler’s resurgence began on the doubles court at AO 2022 when he teamed with Jaimee Fourlis to reach the mixed doubles final.

Ash Barty memorably created history of her own in 2022, becoming the first local to claim the Australian Open women’s singles title in 44 years.

Her thrilling victory against American Danielle Collins in the championship match was the highest-rating women’s final on Australian television in history, with the audience peaking at 4.2 million viewers.

Tomljanovic became the first Australian woman to reach singles quarterfinals at both Wimbledon and US Open in the same season since Evonne Goolagong Cawley in 1979.

The 29-year-old has scored five top-20 wins in a career-best season and rose to a career-high ranking of world No.34. A steely third-round victory against 23-time Grand Slam champion Serena Williams at the US Open further highlighted her improved ability to thrive on the sport’s biggest stage.

A resurgent Daria Saville enjoyed an exceptional season in her return from an Achilles injury. From a ranking of world No.627 in February, the 28-year-old soared back into the world’s top 50.

Unfortunately, this stunning momentum was stalled by a knee injury. Saville underwent surgery last week and faces another lengthy stint on the sidelines.

Storm Sanders and Ellen Perez are thriving in women’s doubles, with both making their top-20 debuts this season.

Sanders achieved a career-high ranking of world No.12 in June. The 28-year-old also claimed her first Grand Slam title in the US Open mixed doubles competition alongside compatriot John Peers. The duo, who were competing together for the first time and became the first all-Australian champions in New York in 21 years, plan to join forces again at Melbourne Park this summer.

Perez achieved a career-high ranking of world No.16 last month. The 27-year-old has advanced to finals in four of her past five tournaments alongside American partner Nicole Melichar-Martinez. The in-form pair were also US Open semifinalists, Perez’s best major result to date.

The enduring Sam Stosur contested her 16th career Grand Slam final, finishing runner-up alongside Ebden in the Wimbledon mixed doubles competition. The 38-year-old’s doubles ranking peaked at world No.8 this season, her highest position in 12 years.

World No.5 Davidson was a singles semifinalist at the Australian Open, Roland Garros and Wimbledon this season and also advanced to the doubles final at Paris.

Feats achieved by Australian players at Grand Slam-level in 2022 include:

Australian Open 2023, supported by major partner Kia in association with Emirates, Luzhou Laojiao and Rolex, will take place at Melbourne Park from 16-29 January 2023.