Jordan Thompson and Alex de Minaur have steered Australia to a 2-0 victory against the Netherlands in the Davis Cup quarterfinals in Spain. 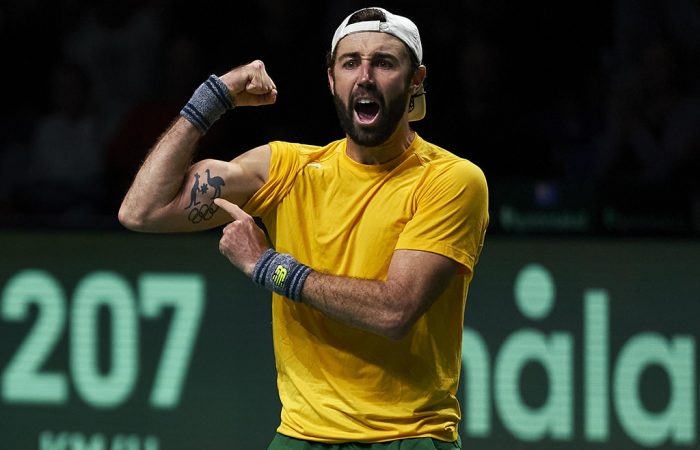 Australia has advanced to the Davis Cup semifinals for the first time since 2017 – and for just the third time in the past 15 years.

The fighting spirit of the Aussie team was on show in a quarterfinal showdown with the Netherlands at Malaga today, with Jordan Thompson and Alex de Minaur both recording come-from-behind singles wins to secure a 2-0 victory.

Thompson got Australia off to a perfect start. The world No.84, a late addition to the Aussie team, scored a hard-fought 4-6 7-5 6-3 win against Tallon Griekspoor in the opening singles rubber.

“It was a battle, that’s for sure,” Thompson said after beating world No.96-ranked Griekspoor.

“(It was) a little bit of a nervous start, but he was playing well. Davis Cup is a different pressure, but I managed to turn the match around, fought my way through it.”

Green and gold off the mark 🇦🇺💪@jordanthommmo2 muscles his way to a 4-6 7-5 6-3 triumph and his first Davis Cup victory in over two years #DavisCup #byRakuten #Final8 | @TennisAustralia pic.twitter.com/3oRRz50HrG

De Minaur then dug deep after dropping the opening set to world No.35 Botic Van de Zandschulp, fighting back to post a 5-7 6-3 6-4 win and secure Australia’s spot in the semifinals.

The world No.24 needed two hours and 38 minutes to emerge on top in a high-quality clash. De Minaur was clutch under pressure – winning all three break points he earned and saving seven of the eight break points he faced.

“It was a hell of a fight,” said De Minaur. “Jordan Thompson came out here, played his heart out and he really inspired me to go out and leave it all out here.”

This continues 23-year-old De Minaur’s unbeaten run in the team competition this season.

“Every single one of the players here has each other’s back and it’s an honour to be part of this team,” said De Minaur.

Australia now faces either Croatia or Spain in the semifinals on Friday (from 2am Saturday AEDT).

Croatia, led by world No.17 Marin Cilic, were finalists last year. While the Spanish team, spearheaded by world No.13 Pablo Carreno Busta, won the Davis Cup title in 2019.

The Australian team is aiming to advance to a Davis Cup final for the first time since 2003, when they defeated Spain in Melbourne to win the prestigious team competition for a 28th time.