Storm Sanders and John Peers, who are teaming up in the mixed doubles competition, are among five Australians set to compete on day 10 at Flushing Meadows. 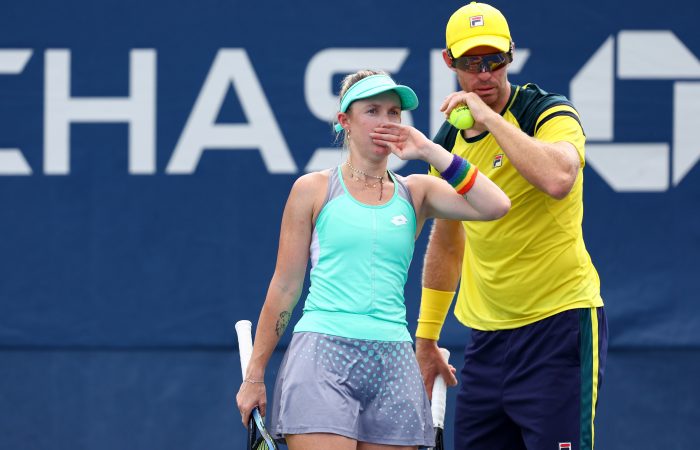 Storm Sanders is enjoying a memorable US Open, advancing to quarterfinals in both the women’s doubles and mixed doubles competitions.

The 28-year-old Australian features in two day-10 matches, as she looks to continue her career-best runs in New York.

As this year’s tournament enters its final days, there are still plenty of Australian players in action.

Heath Davidson is beginning his US Open campaign in the quad wheelchair singles competition, with the world No.5 facing three-time Grand Slam champion Sam Schroder from the Netherlands.

While 16-year-old Taylah Preston, who is the best performing Australian in a US Open girls’ singles competition since a 15-year-old Ash Barty in 2011, will look to extend her winning run in third-round action.

Heath Davidson (AUS) v [2] Sam Schroder (NED)
Quad wheelchair singles, quarterfinals, Court 7, third match
Davidson has been handed a tough quarterfinal draw, pitted against world No.2 Schroder. The 35-year-old Australian is making his second appearance at Flushing Meadows. Although world No.5 Davidson has beaten the 22-year-old Dutchman twice before, he has lost their past seven meetings in straight sets. Schroder is the US Open 2020 champion and won the Australian Open and Wimbledon singles titles this season.
Head-to-head record: Schroder leads 9-2
Last meeting: Schroder won 6-1 6-2 (Nice, June 2022)

[12] Storm Sanders (AUS)/Caroline Dolehide (USA) v [14] Caroline Garcia (FRA)/Kristina Mladenovic (FRA)
Women’s doubles, quarterfinals, Louis Armstrong Stadium, second match
Sanders and world No.35 Dolehide have advanced to their fourth Grand Slam quarterfinal as a team. The No.12 seeds are hoping to reach a second major semifinal, matching their Wimbledon 2021 effort. Their quarterfinal opponents are world No.34 Garcia and world No.27 Mladenovic. The No.14 seeds were the world’s top team in 2016, winning Roland Garros and finishing runners-up at the US Open. The French duo reunited this season to claim their second Roland Garros title.

[4] Storm Sanders (AUS)/John Peers (AUS) v Leylah Fernandez (CAN)/Jack Sock (USA)
Mixed doubles, quarterfinals, Louis Armstrong Stadium, fourth match
Fourth-seeded duo Sanders and Peers are hoping to become the first all-Australian team to advance to the US Open mixed doubles semifinals in 16 years. Although world No.21 Sanders and world No.10 Peers are yet to drop a set this week, they face a fierce challenge in the quarterfinals against 19-year-old Fernandez, last year’s singles finalist in New York, and Sock, a former US Open mixed doubles champion.

[8] Taylah Preston (AUS) v [10] Alexandra Eala (PHI)
Girls’ singles, third round, Court 9, second match
Preston, a 16-year-old from Perth ranked No.13, is the first Australian in 11 years to reach the US Open girls’ singles third round. The eighth-seeded Preston now faces Eala, a 17-year-old from the Philippines. Eala, a former world No.2-ranked junior, has primarily focused on competing at professional level this season and recently broke into the world’s top 300.

[3] Taylah Preston (AUS)/Liv Horde (USA) v Anastasiya Lopata (UKR)/Mia Slama (USA)
Girls’ doubles, first round, Court 15, fourth match
Preston is competing in both singles and doubles on day 10. The 16-year-old Australian is the third seed in the girls’ doubles draw alongside 16-year-old American Horde, who is the world’s No.4-ranked junior. They face 17-year-old Lopata and 16-year-old Slama in the opening round.