The Australian team has finished runners-up in the 2022 Davis Cup competition, the nation’s best result in 19 years. 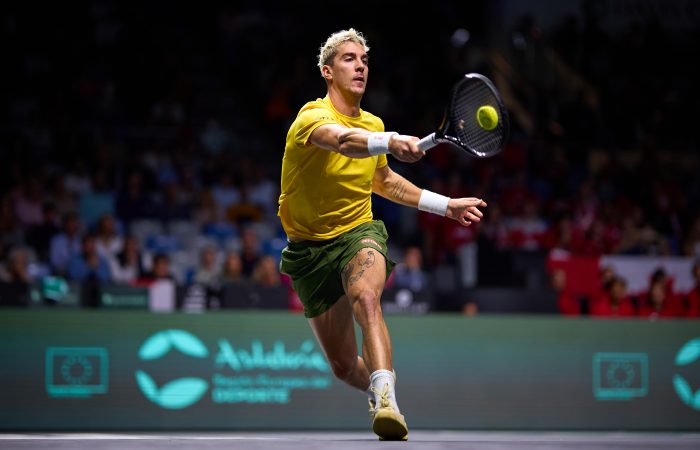 Australia’s quest to win a 29th Davis Cup title – and first in 19 years – has fallen short.

Canada was too strong in the 2022 Davis Cup final today in Malaga, powering to a 2-0 victory against the Australian team.

Leading into the final, Aussie captain Lleyton Hewitt revealed he was wary of Canada’s “firepower”. And Canadian stars Denis Shapovalov and Felix Auger-Aliassime demonstrated exactly why, producing sensational displays to lead their nation to a first Davis Cup title.

Shapovalov struck 23 winners to five in a commanding 6-2 6-4 victory against Thanasi Kokkinakis in the opening singles rubber.

A shell-shocked Kokkinakis, who had never previously faced world No.18 Shapovalov, had no answers against his big-hitting opponent.

“I’m just a bit off the pace at the moment. I haven’t played enough tennis. Haven’t found my confidence yet,” said world No.95 Kokkinakis.

“I’m pretty flat, to be honest. All credit to Denis. He played well. He’s had a lot of matches. He’s a good player.”

Faced with the challenge of needing to beat world No.6 Auger-Aliassime to keep Australia’s hopes alive, Alex de Minaur produced a spirited effort in the second singles rubber.

However, Auger-Aliassime’s relentless pressure proved too much to handle.

The in-form 22-year-old Canadian fired 16 winners to five to outplay world No.24 De Minaur. This helped Auger-Aliassime record a 6-3 6-4 victory and secure the Davis Cup title for his nation.

This is Australia’s 20th runners-up finish, from 48 finals appearances, in the prestigious team competition.

As a 2022 finalist, Australia receives direct entry into the 16-nation round-robin stage of the 2023 Davis Cup Finals next September.