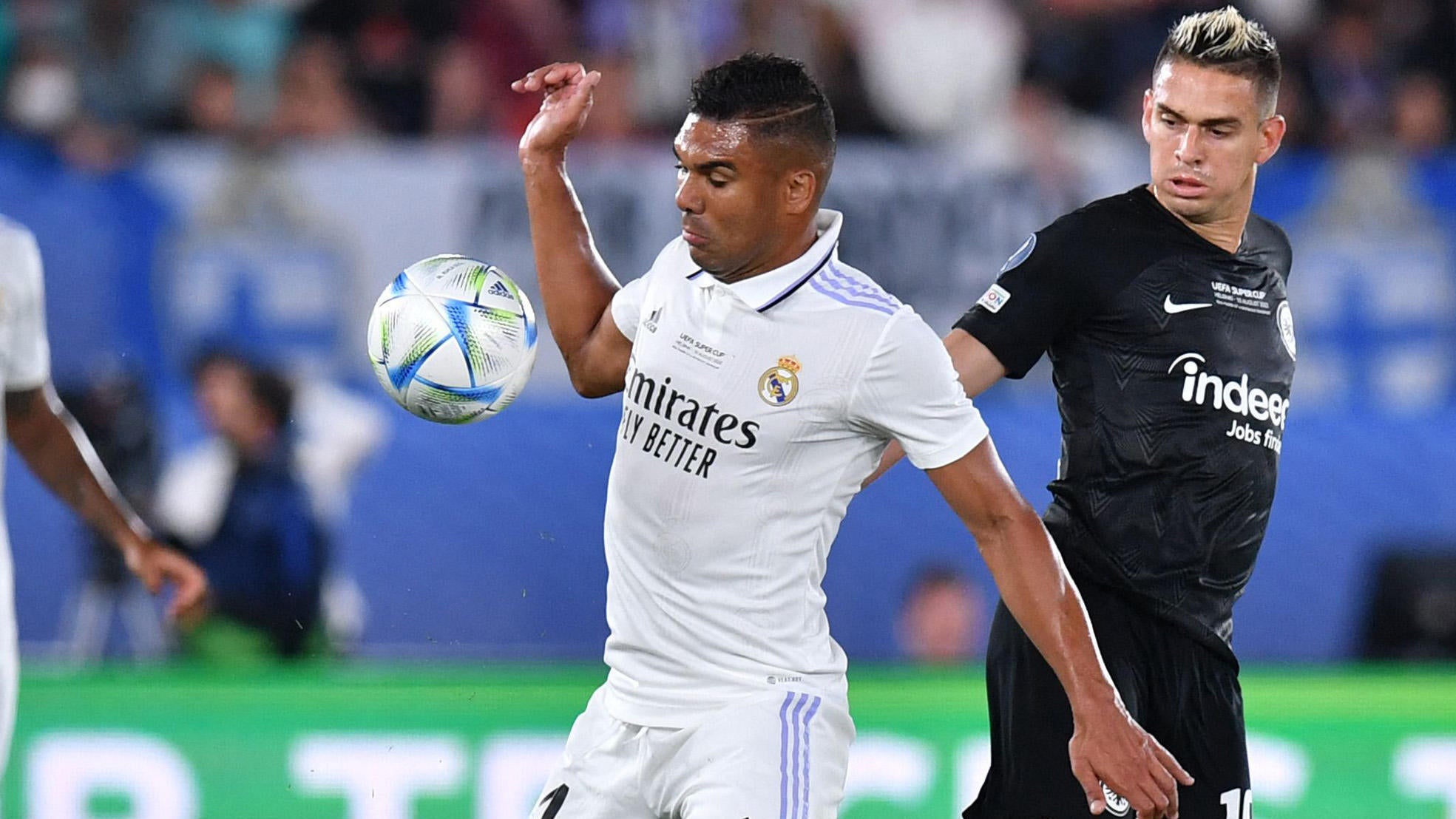 With Manchester United chasing Casemiro of Real Madrid, could the Brazilian be the answer to Erik Ten Hag’s problems? The Red Devils are expected to send an official bid to Real Madrid of €60 million that could be worth another €10 million due to add-ons. United would like to sign the 30-year-old defensive midfielder to a four-year contract with an option for a fifth year as this package would likely be accepted by Real Madrid.

The ten Hag era at Manchester United hasn’t gotten off on the right foot after losing their opening Premier League matches to Brighton and Brentford while scoring one goal and allowing six. The Red Devils sit at the bottom of the table as it’s clear that ten Hag needs reinforcements on the side. The loss to Brentford particularly showed the need for a defensive midfielder as ten Hag played new signing Christian Eriksen at the base of the midfield.

Brentford targeted the trio of David De Gea, Lisandro Martinez, and Eriksen with their press leading to the second goal for the Bees after De Gea also made a mistake on the opener. Teams that live by playing out of the back also die by playing out of the back and it’s clear that Manchester United doesn’t have players who are strong enough to play ten Hag’s pressing and quick passing system to pick teams apart.

Paramount+ is the only place to watch every minute of every Serie A match this season, not to mention select games in Italian. Sign up now with offer code ITALY to get a special one month free trial. A subscription also gives you access to other sports content including every UEFA Champions League and Europa League match, the NFL on CBS, and countless movies and shows. Get it all free for 1 month with promo code ITALY.

If ten Hag doesn’t have a defensive midfielder on the roster that he can trust, the team can certainly do worse than Casemiro who has won everything there is to win except the World Cup and Brazil are among the favorites for that tournament as well. But the style that Real Madrid plays couldn’t be more different than how ten Hag would like United to play as Raphael Varane has also found out after making the swap from Santiago Bernabeu to Old Trafford.

For Los Blancos, Casemiro is like the eye of a hurricane. While Carlo Ancelotti leaves the team to their own devices for free-flowing attacks, the presence of Casemiro provides stability amid the chaos. Sitting deep he clears up any attacks that come his way — even if it involves taking a yellow card — which led to 38 interceptions and 19 shots blocked in La Liga play last season. Those 19 shots blocked were the top mark in La Liga among non-defenders as well.

Casemiro’s role can be a little confusing at Real Madrid as at times he’s deeper than the adventurous David Alaba but his importance to the defense is clear. In the eight matches that Casemiro didn’t feature in during Champions League and La Liga, Real Madrid may have won seven of them but they allowed 10 goals compared to only allowing 38 goals in the 43 matches when he was on the pitch.

But for all of his defensive strength, Casemiro isn’t perfect, which is why Manchester United’s offer may be too good to refuse for Los Blancos. When asked to be adventurous in possession or press up the pitch, Casemiro struggles by picking up yellow cards or turning the ball over. With Ancelotti already having Eduardo Camavinga and Aurélien Tchouaméni in midfield, Real Madrid have prepared for the changing of the guard.

Casemiro’s struggles and age are what make this a bit of a head-scratcher for Manchester United. If ten Hag is realizing that he can’t get the team to press like he wants them to right now but still needs defensive reinforcements to support a double pivot of Bruno Fernandes and Eriksen then Casemiro is a perfect option — if it were on a short-term commitment.

The €60 million fee and four-year contract suggest that ten Hag can build a system around Casemiro. While he has been durable since suffering a leg fracture in 2016, making bets like that on a 30-year-old player isn’t a smart play especially when they would move to a more physical league. This isn’t to say that Casemiro can’t play a physical game because he can, but moving to a new system in a team that is already adjusting and struggling is tough for anyone.

If ten Hag isn’t planning to accommodate Casemiro, similar issues playing out of the back will happen when he’s targeted, which is why this feels like a desperation signing. At the bottom of the league with fans planning to protest the ownership of the Glazers ahead of a rivalry match versus Liverpool on Monday, United need a good headline. They’ve spent all summer pinning their hopes on adding Frenkie de Jong and with that seeming unlikely, things are being thrown at the wall to see what sticks.

Just this week has brought links to Christian Pulisic, Cristiano Ronaldo wanting out again, and even an €80 million bid for Ajax winger Antony rejected. Not exactly the tune heard during the summer about ten Hag restoring Manchester United to its former glory. Ten Hag spoke about how he had assurances from the Glazer family that he’d be backed in the summer but they could be finding out how much polish United needs to restore the former shine to the badge making it an attractive destination. Casemiro could bring that shine, but without help or a system shift, he’ll only add to the discourse surrounding the club.