After Brandon Nakashima lost the second set of his match against Juan Manuel Cerundolo at the Intesa Sanpaolo Next Gen ATP Finals on Tuesday, he looked at his coach, Dusan Vemic. Normally on the ATP Tour, the American would only be able to get emotional support from his team. But this week, he can receive court-side coaching from his box, another innovation at the 21-and-under season finale.

Even if it was not crazy, it worked. The 20-year-old lost just one game in the next two sets to finish the match.

“It was nice to have your coach right there, able to give you some input on how you’re playing out there. I kind of like it more when he doesn’t say too much as opposed maybe to other players, who like their coach talking after every point,” Nakashima said. “But it was nice to hear his thoughts a little bit after that second set. He just gave me a few sentences on what was working and what didn’t work. I think it definitely helped me just get a better understanding of the match out there. I definitely used that input to my advantage.”

Vemic felt that having the ability to coach his player was not critical, but he saw some interesting possibilities that could benefit the fans, too.

“For Brandon, it does not make a big difference,” Vemic said. “But I guess being casual and having the ability to communicate verbally or non-verbally, combined with a couple of tips and fans being able to hear the communication — maybe [for them to] feel [the communication] or be players at the same time [and] learn from those moments — might be an interesting thing.

“All in all, I don’t mind it. I’m pretty sure some players would benefit more, some less. But then again, many other sports have communication. I’m not sure if coaching would be the right word. I feel like [it is] just communication. Some people like to share thoughts… I don’t think it would hurt the sport.” 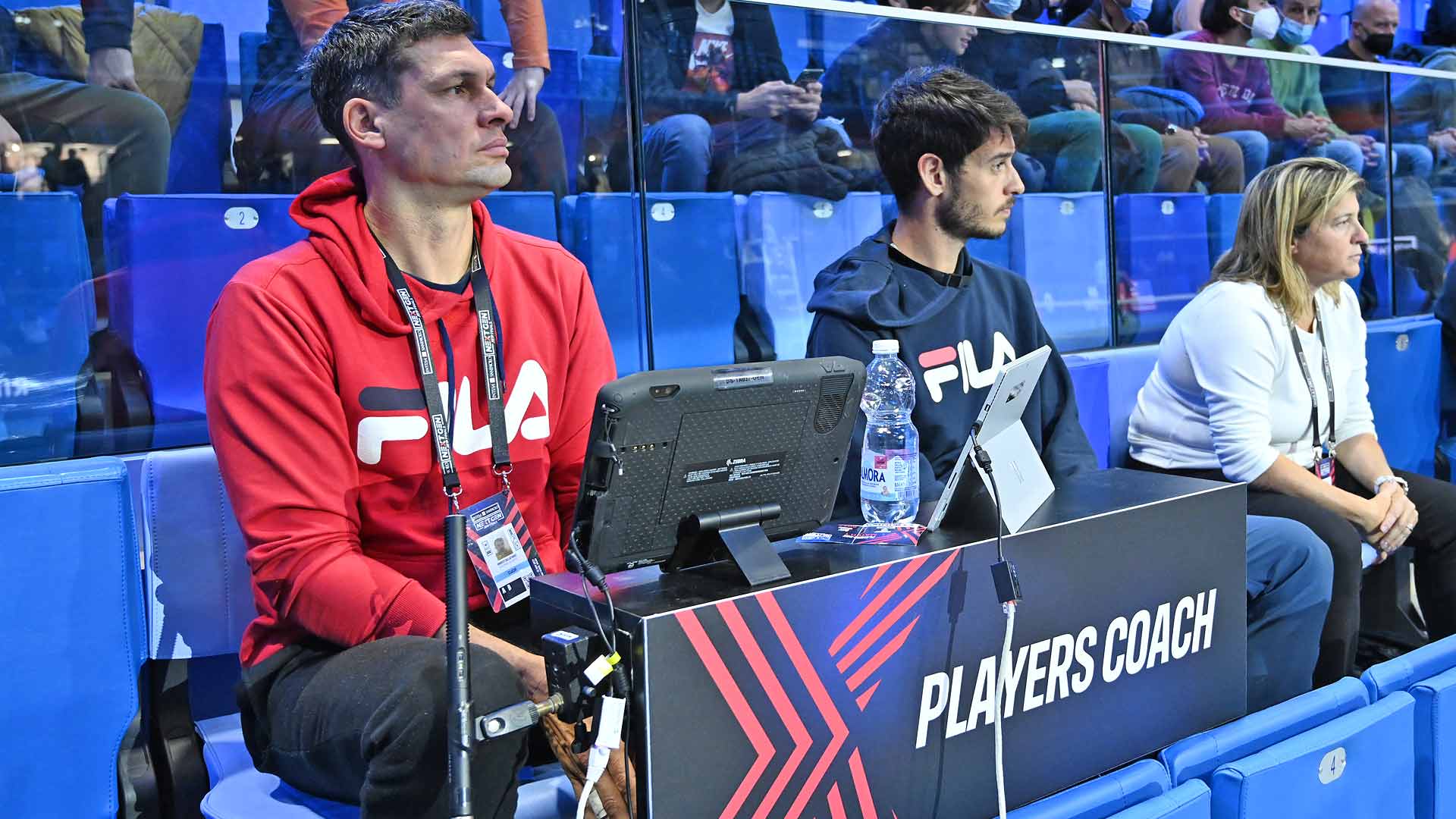 Andres Dellatorre” />
Photo Credit: Peter Staples/ATP Tour
During the same match, there was more coaching at the other end of the court. Cerundolo’s coach, Andres Dellatorre, was providing advice and encouragement to his charge throughout the match.

“In other sports, the coach can talk, participate, give advice. In tennis, it is not that way. Today, it felt very natural. This change would be ideal,” Dellatorre said. “I don’t need to step onto the court. I don’t like that.

Having the chance to talk from the box, at least when the player is close to you [is good]… You give the coach an additional value. One needs to realise that most of the current players will be coaches tomorrow. Everything is connected.

“I think this was a great initiative. It felt really good and I wasn’t uncomfortable at all.”

Top seed Carlos Alcaraz had plenty of experience in his corner during his straight-sets victory against Holger Vitus Nodskov Rune. The 18-year-old Spaniard was able to turn to his coach, former World No. 1 Juan Carlos Ferrero.

“When you’re playing the match, you don’t realise a lot of things and outside the court you realise things better,” Alcaraz said. “Some returns, some balls that I missed, he can tell me how to do better and I think he did [that]. He told me how to return better or how to hit the ball when I missed.”

Lorenzo Musetti lost the final match of the evening against Argentine Sebastian Baez. But one positive he took away from it was being able to receive feedback from his longtime coach, Simone Tartarini.

“Of course the coaching I think is a good solution,” Musetti said. “I like that and I will push to put that also on the ATP Tour.”