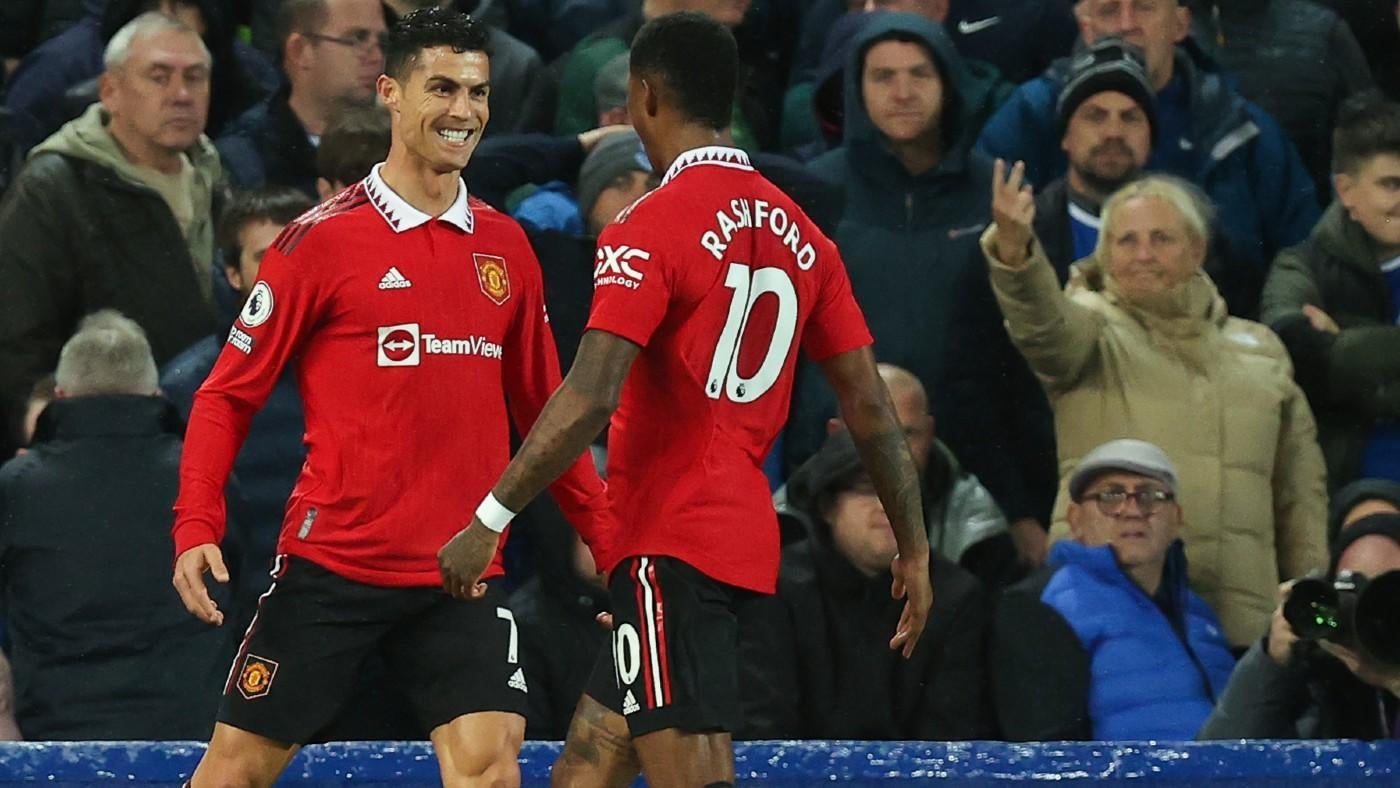 Behind Cristiano Ronaldo’s 700 career club goal, Manchester United were able to withstand a late Everton challenge to win 2-1 at Goodison Park on Sunday. Alex Iwobi’s strike opened the scoring in the fifth minute but it wasn’t enough to keep Everton’s unbeaten streak going as it ended at six matches. Antony scored in his third consecutive league match to become the first Manchester United player to ever score in his first three starts for the club before Ronaldo sealed the winner while making history.

Anthony Martial was having a strong match assisting United’s opener but had to leave with a knock, being replaced by Ronaldo. Casemiro would find Ronaldo on the counterattack to score the go-ahead goal before the half, and from there United would hold on in the match. Despite the loss, it was a match with plenty of positives for Frank Lampard except that he’ll be without Anthony Gordon for Everton’s trip to Tottenham next Saturday. Gordon will miss the match due to yellow card accumulation after his reckless tackle on Bruno Fernandes in the second half.

Midfielder James Garner also made his Everton debut against his former club and almost scored an equalizer near the end of the match but a strong save from David de Gea kept United in the lead. Marcus Rashford almost had an insurance goal in the 81st minute but after a VAR review, it was ruled out due to the ball touching his hand before he scored. Dominic Calvert-Lewin’s return to the pitch is also a positive for the Toffees as they’re becoming more balanced as fears of relegation are firmly in the rearview mirror.

The win shows that United are able to have a short memory after losing a disappointing Manchester derby last weekend, which is important as this victory sees them rise into fifth place in the Premier League, only one point behind Chelsea for a top-four spot. Everton will finish the week no lower than 13th in the table as Lampard has put the side in a good place to realize their ambitions.

It was quite a wait but Ronaldo has netted his 700th career club goal. It was unexpected for Ronaldo to get the goal in the first half as he started the match on the bench but he was brought in for Martial in the 29th minute when the Frenchman picked up a knock and couldn’t continue. It was only fitting that Ronaldo’s former Real Madrid teammate Casemiro created the landmark goal. Of the 700 club goals, 144 have been scored for Manchester United with 450 coming as a member of Real Madrid, 101 coming for Juventus, and five at Sporting CP.

The season has been a struggle for Ronaldo as this was his first Premier League goal, and he has only started one match but it’s a goal that could pave the way for more starts down the road under Erik ten Hag. It’s his first goal for Manchester United since scoring against Sheriff on September 15th.

Take a look at the landmark goal:

Wherever Lampard needs Iwobi he has shown up. From playing as a winger to defending as a wing-back, but Lampard’s newest role for Iwobi may be his best one yet. Flanked by Idrissa Gueye and Amadou Onana, Iwobi is able to get forward and create chances by floating into space. Iwobi’s opening goal for the Toffees was quite a hit for his first of the season and he also has three assists as his passing and vision are setting the tone for the attack.

During the match, Iwobi created two chances and took two shots while also blocking a shot, winning a tackle, and securing two interceptions. His transition into a do it all-around midfielder has been one of the strongest points of Lampard’s time as manager.

Luke Shaw is back, and United need him

Starting his first match for Manchester United since the opening day of the Premier League season, Shaw had a steady performance at left-back to keep things balanced for the Red Devils. While he lost both of his attempted tackles, Shaw blocked a shot and had two interceptions as he kept things simple, unlike Tyrell Malacia who he replaced in the lineup. While Shaw may need more time to shake off rust and attack near the level of Diogo Dalot on the right flank, he wasn’t a liability that Everton could target.

This will also be good news for Gareth Southgate as Shaw started his first match for England since March during the September international window in a 3-3 draw against Germany. Shaw scored a goal in that match and will likely be part of England’s World Cup roster if he can keep a starting role with Manchester United, and more performances like Sunday will help him.