Australian Daria Saville has knocked out top seed and world No.7 Jessica Pegula in second-round singles action at the Citi Open at Washington. 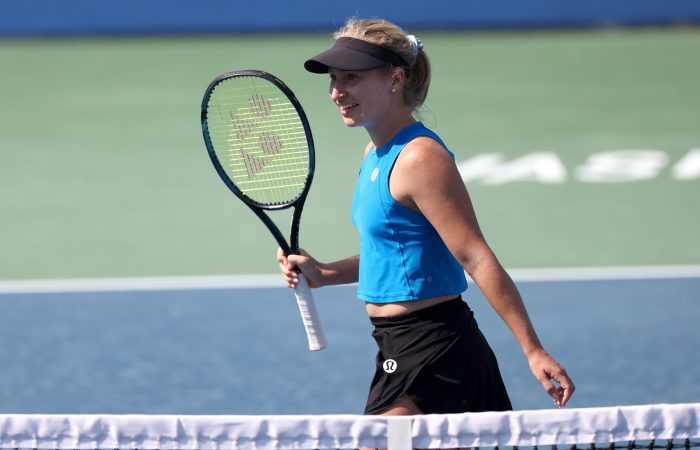 Daria Saville has upset world No.7 Jessica Pegula in the second round at a WTA 250 tournament in Washington.

The resurgent Australian posted a 7-5 6-4 victory against the top-seeded American, who won the most recent edition of this tournament in 2019.

World No.88 Saville stayed calm under pressure, saving nine of the 10 break points she faced in the one-hour and 38-minute clash.

This is Saville’s 13th career top-10 victory and her highest-ranked scalp since beating world No.4 Petra Kvitova at Beijing in October 2018.

It is another high in a remarkable comeback season for Saville, whose ranking had dipped to world No.627 in February. This is the 28-year-old’s second top-10 win this season and propels her into a third tour-level quarterfinal.

“I’m happy about it, and I think that creates kind of a good reputation and players are going to see. ‘Okay, she’s playing well. She has had some good wins this year’,” Saville said.

Saville now faces Canadian qualifier Rebecca Marino in the quarterfinals and is aiming to progress to a first tour-level singles semifinal since February 2018.

World No.21 De Minaur led 6-3 5-3, but was unable to serve out the match. Nishioka fought back to force a second-set tiebreak, which the world No.96 claimed after saving a match point.

Third-seeded American Taylor Fritz proved too strong for Popyrin in their second-round meeting, not dropping a service game in a 6-4 6-3 victory.

These results leave Nick Kyrgios as the last Australian standing in the men’s singles draw.

Kyrgios scored a 6-3 6-4 win against 14th-seeded American Tommy Paul, with the 27-year-old firing 15 aces and saving all four break points he faced in the 85-minute encounter.

Coming up clutch 💪@NickKyrgios‘ quest for a second Washington title continues with a 6-3, 6-4 victory over Paul.#CitiOpen pic.twitter.com/Tj4nbOC7lM

It was a tough day for Australian competitors at an ATP 250 tournament in Los Cabos.

Five Australians had progressed through to the second round at the hard-court event – but all crashed out today.

There was better news in the doubles competition, with Wimbledon champions Matthew Ebden and Max Purcell scoring a 6-3 6-4 first-round win against Mexican Hans Hach Verdugo and American Hunter Reese.