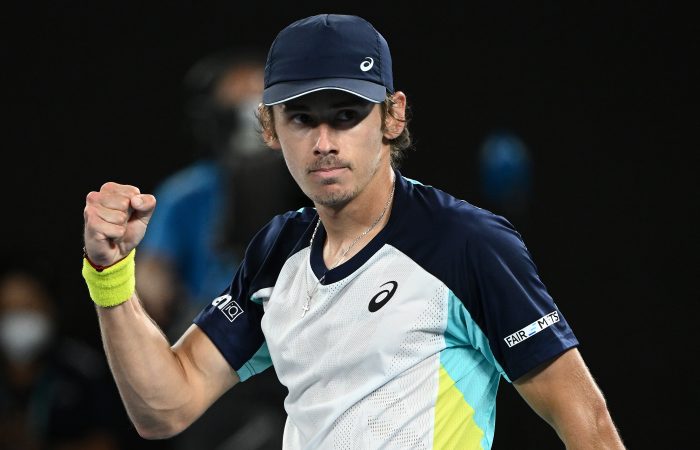 Alex de Minaur is enjoying a career-best run at Australian Open 2022, advancing to the fourth round in the men’s singles competition for the first time.

The 22-year-old Australian is now eyeing a quarterfinal spot when he faces world No.10 Jannik Sinner at Rod Laver Arena this afternoon.

De Minaur is excited for the challenge, as he aims to record his second career top-10 win at Grand Slam level and a first at Melbourne Park.

“You can’t just sit back and let them bully you around.”

De Minaur’s aggressive approach is paying off at this tournament, tallying 103 winners in his first three matches.

“That was a focus, to really kind of step that up and just have an aggressive mindset,” he said.

“You know, I’m happy I’ve been able to start the year playing that way, and playing some great tennis and getting the results thanks to that. Now it’s all about just keeping building on that.”

De Minaur is one of 23 Aussie players scheduled to compete on day eight at Australian Open 2022.

[32] Alex de Minaur (AUS) v [11] Jannik Sinner (ITA)
Men’s singles, fourth round, Rod Laver Arena, day session, third match (not before 2.30pm)
De Minaur has progressed through the Australian Open 2022 draw in impressive fashion, losing only a single set. “I’m happy with where my level is at,” said the world No.42. “I’m just, at the moment, taking care of business.” Sinner is also enjoying a career-best run at Melbourne Park, where he had never previously progressed beyond the second round, and is unbeaten in six matches so far in 2022. “I hit with Jannik in Sydney (at the ATP Cup). I’ve hit with him a lot. I’ve played him,” De Minaur said. “I know what’s coming – immense firepower.”
Head-to-head: Sinner leads 2-0
Last meeting: Sinner won 6-7(3) 6-4 6-1 (Sofia, 2020)

[9] Storm Sanders (AUS)/Caroline Dolehide (USA) v Marta Kostyuk (UKR)/Dayana Yastremska (UKR)
Women’s doubles, third round, Margaret Court Arena, first match (from 11am AEDT)
World No.27 Sanders has progressed to the third round in an Australian Open women’s doubles draw for the first time. The 27-year-old Aussie and her 23-year-old American partner Dolehide now have their sights set on a quarterfinal spot. To get there, they’ll need to beat a fearless Ukrainian pair. The 21-year-old Yastremska and 19-year-old Kostyuk are enjoying a career-best AO run and eliminated the eighth seeds this week.

[WC] Dane Sweeny (AUS)/Li Tu (AUS) v [2] Rajeev Ram (USA)/Joe Salisbury (GBR)
Men’s doubles, third round, John Cain Arena, second match
It has been a dream Grand Slam doubles debut so far for Sweeny, a 20-year-old from Queensland, and 25-year-old South Australian Tu. However, the Aussie wildcards face a big challenge against the No.2 seeds in the third round. World No.3 Salisbury, a 29-year-old Brit, and world No.4 Ram, a 37-year-old American, won the AO 2020 men’s doubles title and were finalists last year.

Matt Ebden (AUS)/Max Purcell (AUS) v [13] Raven Klaasen (RSA)/Ben McLachlan (JPN)
Men’s doubles, third round, Kia Arena, second match (not before 12.30pm)
After advancing to the US Open quarterfinals in their first tournament together last year, 34-year-old Ebden and 23-year-old Purcell are proving a terrific team. The Aussies, ranked No.55 and No.34 respectively, eliminated the No.4 seeds in the second round and now have their sights on beating the No.13 seeds. Klaasen is a 39-year-old South African ranked No.27 and McLachlan is a 29-year-old from Japan ranked No.49.

[2] Zhang Shuai (CHN)/John Peers (AUS) v Bernarda Pera (USA)/Wesley Koolhof (NED)
Mixed doubles, second round, Court 3, third match
The 33-year-old Peers is hoping to advance to an Australian Open mixed doubles quarterfinal for the second time in his career – and for the first time since 2015. The world No.12-ranked Aussie and world No.8 Zhang, a 33-year-old Chinese player, face the in-form combination of world No.45 Pera, a 27-year-old American, and world No.21 Koolhof, a 32-year-old from the Netherlands.