Australian Alex de Minaur hopes to elevate his game to greater heights in 2023. 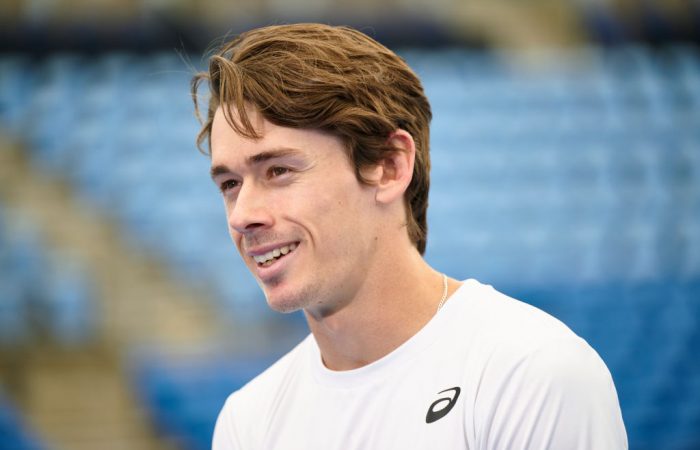 Alex de Minaur is spending Christmas in Sydney this year, most likely on a tennis court.

“You know as they say, no rest for the wicked,” said De Minaur, who revealed to media at Ken Rosewall Arena today he has had only a single day off since steering Australia into the Davis Cup final last month.

“There’s nothing better than getting some good old fashion gains.”

Such dedication has helped the 23-year-old reach some impressive heights already in his young career – and he is determined to achieve even more in 2023.

“I want to really push myself. I want to get higher in the rankings,” said the world No.24.

“My whole career has been a lot of going step-by-step, so I think the next step is to really push for the top 15, top 10.

“I think I’m very close and I think my level is there. I just need to win a couple of more big matches here and there, and I think I’ll be able to achieve that.”

De Minaur enjoyed career-best runs at the Australian Open and Wimbledon this season, reaching the fourth round at both. While pleased with these performances, he believes he should be challenging for Grand Slam titles.

“I’m not really one of those guys who is content with making third rounds, fourth rounds of Slams, you know,” he said.

“I really want to be in the deep end of those tournaments and playing the best in the world for the title.”

De Minaur has high hopes for the upcoming Australian Open, which is his favourite tournament.

“As I’ve often said in the past, this is by far the best time of the year. I’m just really looking forward to playing back in front of an Aussie crowd, which I’ve thoroughly missed throughout the year.

“Hopefully we can start off the year with a good run at the AO.”

But for now, De Minaur’s immediate attention is on the United Cup and representing Australia in the new mixed team event.

“Hopefully we can push each other, have each other’s backs, come out with some great tennis and do Australia proud.”

Alex de Minaur is excited to be representing Australia in a new mixed-team format at the #UnitedCup 🇦🇺https://t.co/5hj31cBH9n

The Australian team, which also includes Nick Kyrgios and Ajla Tomljanovic, begins their United Cup campaign against Great Britain on 29 December in Sydney.

“Whenever we get (to experience) something new, it is always exciting for all of us players.

“And ultimately, it’s another opportunity and chance for us to represent Australia in a team environment, which I’m looking forward to.”

> BUY NOW: Get your tickets to cheer on the Aussies at the United Cup