Alex de Minaur claims a hard-fought win over Sebastian Korda at the Paris Masters to set a second-round meeting with Daniil Medvedev. 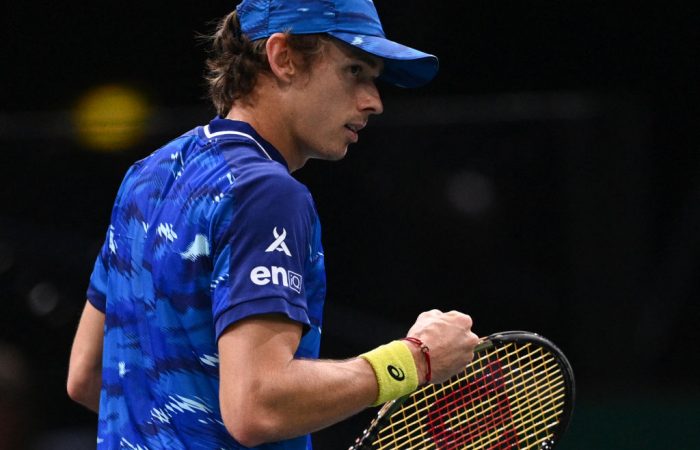 Alex de Minaur has called on all his fighting ability to claim a first-round win at the Paris Masters, overcoming Sebastian Korda in three hard-fought sets.

The Australian required two hours and 43 minutes to claim his 6-4 4-6 6-4 victory, which sets a second-round meeting with No.4 seed and recent world No.1 Daniil Medvedev.

The tight scoreline reflected an evenly matched first-round contest, with world No.25 De Minaur ranked only slightly higher than No.33 Korda.

A strong start was therefore welcome as De Minaur claimed a service break over Korda in the opening game and maintained momentum to secure a 6-4 lead in 43 minutes.

Still, the 22-year-old Korda was high on confidence after reaching the final of  last week’s ATP 250 tournament in Antwerp, where his victims included Karen Khachanov and Dominic Thiem.

Korda appeared set to similarly challenge with an early break over De Minaur in the second set. While the American  couldn’t immediately consolidate, he forced a third-set decider after another service break in the 10th game.

From there, De Minaur navigated his toughest test as he survived four break points in the second game and claimed his own service break to claim a 4-3 lead.

Withstanding 12 aces against his big-serving opponent, De Minaur maintained his advantage to book a tantalising second-round against Medvedev.

It will be a fifth career-meeting with the accomplished Russian, who has claimed each of his four previous matches against De Minaur.

Contesting the final ATP Masters 1000 event of the 2022 season, the 23-year-old Australian will aim to build on an impressive year.

De Minaur lifted a sixth ATP singles title in Atlanta, led Australia to the Davis Cup Final and achieved career-best results with fourth round finishes at the Australian Open and Wimbledon.

Book online, play today: Visit play.tennis.com.au to get out on court and have some fun