Aussie duo Matthew Ebden and Max Purcell are through to the semifinals in the Wimbledon 2022 gentlemen’s doubles competition. 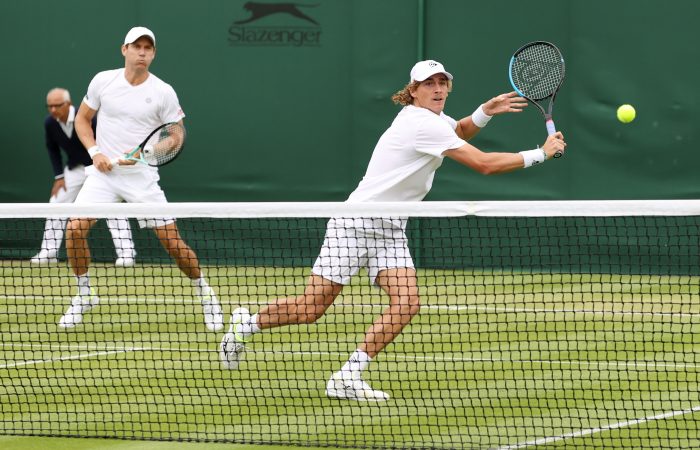 Matthew Ebden and Max Purcell have continued their career-best run at Wimbledon, advancing to the semifinals in the gentlemen’s doubles competition.

Nine aces and 22 winners helped Ebden and Purcell seal victory against the seventh seeds in an efficient one hour and 53 minutes, their quickest match so far this tournament.

World No.31 Ebden had never progressed beyond the second round in seven previous appearances at the All England Club, while world No.34 Purcell’s best result had been a third-round run last year.

Their stunning 2022 performance, which includes saving three match points in their opening round, propels 34-year-old Ebden into his second career Grand Slam men’s doubles semifinal and a third for 24-year-old Purcell.

Ebden and Purcell are now one win away from reaching their second Grand Slam final of the season, having finished runners-up at the Australian Open in January.

Their Wimbledon success puts them in elite company too, becoming the 31st and 32nd Australians to advance to a gentlemen’s doubles semifinal at the tournament in the Open era.

They are the first all-Australian team to reach this stage since Wayne Arthurs and Paul Hanley in 2004.

Peers, who finished runner-up alongside Brit Jamie Murray in 2015, was the last Australian to contest a Wimbledon gentlemen’s doubles final.

Ebden has also advanced to the mixed doubles semifinals alongside fellow Aussie Sam Stosur and will play for a spot in the final later today.