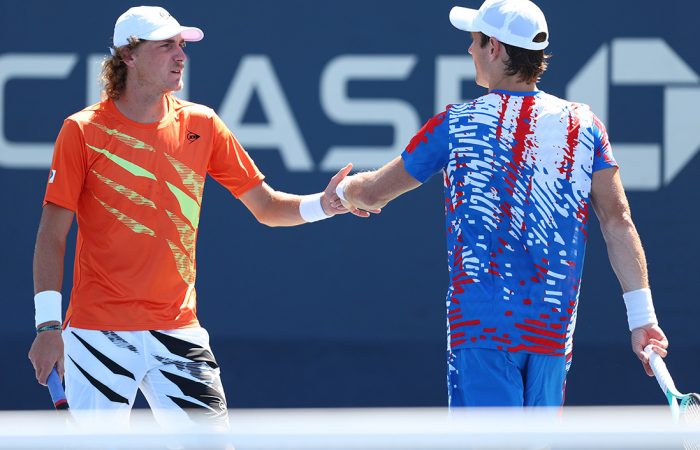 Australian players are enjoying a sensational season in doubles, as the US Open 2022 day six schedule highlights.

These Aussie duos have created history this year, with their Grand Slam success marking the first time since 1982 that two different all-Australian combinations have won major men’s doubles titles in a single season.

Ebden is also excelling in mixed doubles, reaching the Wimbledon 2022 final alongside compatriot Sam Stosur. The Aussie pair are teaming up for the first time in New York and playing for a quarterfinal berth today.

Ebden and Stosur are among six Australians to progress to the second round in the mixed doubles competition, the most to reach this stage at the tournament in 17 years.

Matt Ebden (AUS)/Max Purcell (AUS) v [WC] Robert Galloway (USA)/Alex Lawson (USA)
Men’s doubles, second round, Court 12, first match (from 2.30am AEST)
Reigning Wimbledon champions Ebden and Purcell have extended their Grand Slam match winning streak to seven. World No.34 Ebden and world No.37 Purcell are now targeting an eighth against an American wildcard pairing. World No.91 Galloway and world No.106 Lawson are each hoping to advance to a Grand Slam third round for the first time.

[12] Storm Sanders (AUS)/Caroline Dolehide (USA) v [WC] Sophie Chang (USA)/Angela Kulikov (USA)
Women’s doubles, second round, Court 10, second match
After storming into the second round without dropping a game, world No.21 Sanders and world No.35 Dolehide carry confidence into this showdown against an American wildcard pairing. World No.73 Chang and world No.80 Kulikov, who won their first WTA title together in July, are competing in their first Grand Slam.

Daria Saville (AUS)/Leylah Fernandez (CAN) v Dalma Galfi (HUN)/Bernarda Pera (USA)
Women’s doubles, second round, Court 17, second match
After upsetting the second seeds in the opening round, Saville and 19-year-old Canadian partner Fernandez want to continue their winning run. The 28-year-old Saville, currently ranked No.228 in doubles, is looking to advance to a Grand Slam third round for the fourth time in her career – and for the first time since the 2017 US Open.

[8] Thanasi Kokkinakis (AUS)/Nick Kyrgios (AUS) v Andre Goransson (SWE)/Yoshihito Nishioka (JPN)
Men’s doubles, second round, Court 11, third match (not before 5.30am AEST)
World No.18 Kyrgios and world No.22 Kokkinakis are undefeated in Grand Slam doubles matches as a team this season, winning all seven they have contested. The reigning Australian Open champions, who are playing together at the US Open for the first time, now face world No.77 Goransson and Nishioka, who Kyrgios defeated in the Washington singles final in August.

Sam Stosur (AUS)/Matt Ebden (AUS) v [5] Jessica Pegula (USA)/Austin Krajicek (USA)
Mixed doubles, second round, Court 12, third match
World No.20 Stosur and world No.34 Ebden continue to prove a formidable team. The Australian Open 2021 and Wimbledon 2022 finalists are through to the second round, where they face a fifth-seeded American combination. World No.6 Pegula and world No.32 Krajicek have both made Grand Slam doubles finals this season.