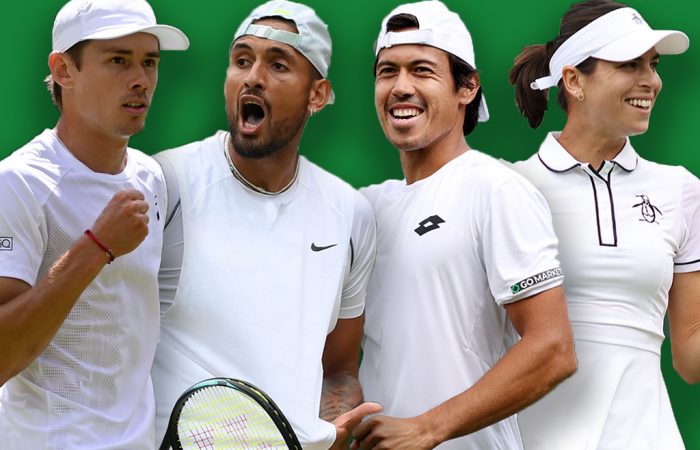 This is the most to reach this stage at the All England Club since 1999, when Pat Rafter, Mark Philippoussis, Wayne Arthurs and Jelena Dokic all contested the round of 16.

“You make it this far in the draw, you’re feeling good, seeing the ball pretty big,” noted world No.40 Kyrgios.

“I’m super proud with Aussies being this far and still capable of doing some damage at Wimbledon. It’s good to see.”

De Minaur, Kyrgios, Kubler and Tomljanovic all feature in fourth-round matches on the day eight schedule. In total, 12 Aussie players are in action on what looms as an unmissable Monday.

Play begins from 8pm AEST and is broadcast live in Australia on the Nine Network and Stan Sport.

[19] Alex de Minaur (AUS) v Cristian Garin (CHI)
Gentlemen’s singles, fourth round, No.2 Court, first match (from 8pm AEST)
De Minaur has advanced to the fourth round at Wimbledon for the first time and is now targeting a second major quarterfinal appearance to match his US Open 2020 run. “I’m pretty happy with the position I’m in right now, so hopefully I can keep it going,” said the 23-year-old Australian. World No.27 De Minaur has never lost a set in three previous encounters with Garin, including at Eastbourne last month. This is the second year in a row that world No.43 Garin has made Wimbledon’s fourth round and the 26-year-old from Chile is hoping to progress to his first Grand Slam quarterfinal.
Head-to-head record: De Minaur leads 3-0
Last meeting: De Minaur won 6-3 6-3 (Eastbourne, June 2022)

[Q] Jason Kubler (AUS) v [11] Taylor Fritz (USA)
Gentlemen’s singles, fourth round, No.1 Court, second match
World No.14 Fritz enters this fourth-round clash on a seven-match winning streak, having scooped an ATP title at Eastbourne on the eve of Wimbledon. The 24-year-old American is now looking to reach his maiden Grand Slam quarterfinal. So to is world No.99 Kubler, who is enjoying his own career-best major run. The 29-year-old Australian qualifier has won 22 of his past 25 matches, including his past six on grass. “I’m going to try as hard as I can and then just sort of see what happens,” said Kubler, who is aiming to record his career-first top-20 win.
Head-to-head record: Fritz leads 1-0
Last meeting: Fritz won 6-3 3-6 6-3 ret. (US Open, August 2018)

Ajla Tomljanovic (AUS) v Alize Cornet (FRA)
Ladies’ singles, fourth round, No.2 Court, second match
After facing off in the second round at Wimbledon last year, world No.44 Tomljanovic and world No.37 Cornet meet again in 2022 in the fourth round. “I remember I had a really tough match with her here last year,” said 29-year-old Tomljanovic, who is looking to replicate last year’s quarterfinal appearance.  Having beaten two top-20 seeds to reach this stage, Tomljanovic’s confidence is high. “I can do this, I’m here to win,” she said. The 32-year-old Cornet is making her 15th main draw appearance at the All England Club and hoping to reach the final eight for the first time.
Head-to-head record: Tied at 2-all
Last meeting: Tomljanovic won 6-4 0-6 6-3 (Wimbledon, June 2021)

[7] John Peers (AUS)/Filip Polasek (SVK) v [9] Jamie Murray (GBR)/Bruno Soares (BRA)
Gentlemen’s doubles, third round, No.3 Court, second match (not before 10pm AEST)
This is a battle between four experienced Grand Slam-winning doubles champions. World No.21 Murray and world No.30 Soares have won both of their previous meetings, in the US Open semifinals last year and at Eastbourne last month. World No.16 Peers, who is playing alongside world No.15 Polasek at the All England Club for the first time, is aiming to progress to his fifth Wimbledon quarterfinal and first since 2019. The 33-year-old’s best result at the tournament is a runner-up finish alongside Murray in 2015.

[14] Matthew Ebden (AUS)/Max Purcell (AUS) v [3] Wesley Koolhof (NED)/Neal Skupski (GBR)
Gentlemen’s doubles, third round, Court 18, second match
The Aussie duo have won two five-set battles to reach the third round, marking 34-year-old Ebden’s best Wimbledon result and matching 24-year-old Purcell’s 2021 effort. World No.7 Koolhof and world No.8 Skupski have won a tour-leading five titles so far in 2022, including the ‘s-Hertogenbosch grass-court title last month where they beat Ebden and Purcell in the final. This is also a rematch of an Australian Open 2022 quarterfinal, which world No.31 Ebden and world No.34 Purcell won in a deciding-set tiebreak.

[4] Gabriela Dabrowski (CAN)/John Peers (AUS) v [6] Sania Mirza (IND)/Mate Pavic (CRO)
Mixed doubles, quarterfinals, No.3 Court, fourth match
Peers has advanced to the Wimbledon mixed doubles quarterfinals for the third time in his career. The world No.16, who is partnering world No.6-ranked Canadian Dabrowski, is now targeting a second consecutive semifinal appearance. They face the experienced team of world No.24 Mirza and world No.3 Pavic for a place in the final four.

Sam Stosur (AUS)/Matthew Ebden (AUS) v [1] Ena Shibahara (JPN)/Jean-Julien Rojer (NED)
Mixed doubles, second round, Court 18, fourth match
Ebden has matched his career-best Wimbledon mixed doubles result and is now looking to reach a first quarterfinal. World No.11 Stosur is a two-time Wimbledon mixed doubles champion and hoping to progress to her sixth quarterfinal at the tournament. Standing in their way are the top seeds – world No.8 Shibahara and world No.11 Rojer.

Edward Winter (AUS)/Jack Loutit (NZL) v [WC] Patrick Brady (GBR)/William Jansen (GBR)
Boys’ doubles, first round, Court 4, third match
Winter, a 17-year-old South Australian with an ITF junior ranking of No.89, is teaming with Loutit, an 18-year-old from New Zealand ranked No.80. They made a grass-court quarterfinal together last week and face British wildcards, 17-year-old Brady and 17-year-old Jansen, in the first round.

[6] Taylah Preston (AUS) v [Q] Yu-Yun Li (TPE)
Girls’ singles, second round, Court 7, third match
Preston is building some impressive momentum. The 16-year-old from Perth has won eight of her past nine matches on the ITF Junior World Tour to rise to a career-high ranking at world No.18. Her second-round opponent is Chinese Taipei qualifier Li, an 18-year-old ranked No.80.