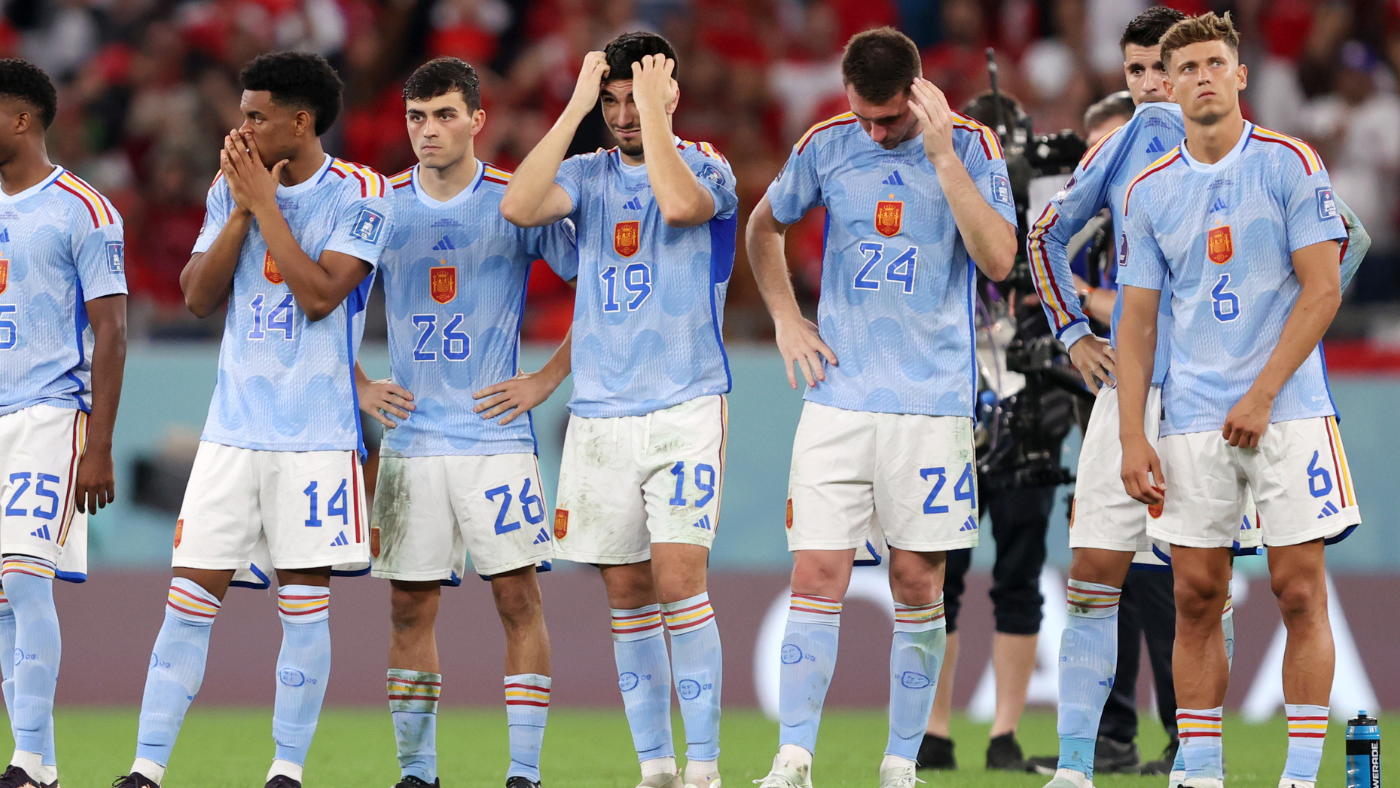 Spain are out of the FIFA 2022 World Cup in Qatar after a 3-0 penalty defeat to Morocco at Education City Stadium on Tuesday. La Roja’s exit was as predictable as it was disappointing after a bright start with a 7-goal thrashing of Costa Rica followed by a strong of mediocre performances.

Pablo Sarabia, Carlos Soler, and Sergio Busquets will take much of the blame because of their misses from the spot but it should not disguise what was actually a pretty underwhelming overall showing from La Roja in Qatar. Two goals across three games against Germany, Japan, and Morocco made a mockery of the idea that the Spanish were ever even given consideration as favorites.

Much was built out of an early thrashing of an ageing Costa Rica side in Group E without the key initial question being answered — a reliable and consistent source of goals in a team without a true attacking focal point. Marco Asensio came back in against Morocco despite Alvaro Morata’s more productive showings and by the time that the latter was sent on in Al Rayyan, it was too late for Spain to get going again after the game had dropped into a lull. This was a match that saw 11 total shots between the two sides in regulation.

Penalties brings its own questions about the overall experience of the squad with a number of seasoned heads missing from the group who could have been part of the trip had Enrique chosen differently as few of the members of the squad had experienced a shootout let alone one of this magnitude.

Sergio Ramos is back to form and fitness with Paris Saint-Germain, for example, while David De Gea is often unfairly singled out for blame with a Manchester United side which has been below par until Erik ten Hag’s summer arrival.

Might those two have aided the Spanish from the spot? Simon saved one penalty so perhaps De Gea would not have made a huge difference but Ramos absolutely would have stepped up to the spot for his country and possibly done a better job than PSG teammates Sarabia, and Soler, or old rival Busquets.

All of that skirts the other issue that so much of Spain’s showing in Qatar was based around possession without much actual purpose — almost as if it was passing for the sake of passing at times. For example, the Spanish attempted 1019 passes against Morocco, created precious little and ended up losing after 120 plus minutes of complete and utter tedium on the world stage which surely cannot have pleased Enrique. Unsurprisingly their passing network shows lots of the ball moving side to side, and very little of it getting to the forward.

The coach has been active on Twitch throughout the tournament so it will be interesting to see what he has to say in defense of his players and this performance with Qatar now registered as a disappointment which will likely lead to a reflection within the Spanish hierarchy.

There is no doubting the talent that many of these kids possess but it counts for little if they are not deployed in a logical setup which gets the best out of them and enables them to successfully perform to the best of their abilities which was not the case in Qatar.