James Duckworth was one of five Australian players to record first-round qualifying wins today at the Adelaide International. 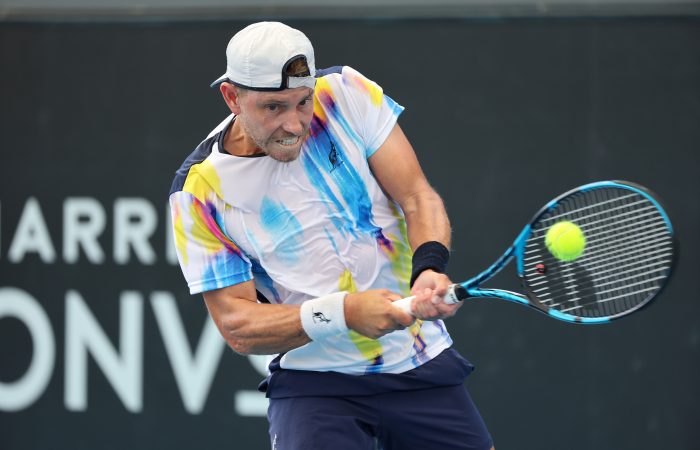 Australians have made an impressive start at the Adelaide International, with five scoring opening-round qualifying wins today.

Popyrin powered to a 6-2 6-3 victory against world No.99 Zhang Zhizhen, losing only six points on serve in a 59-minute encounter.

Duckworth fired 12 aces in his 6-3 7-6(2) win against American Ben Shelton and will now play fellow Australian Rinky Hijikata for a place in the main draw.

Hijikata, a wildcard entry ranked world No.164, posted a 6-2 6-3 victory against world No.90 Gregoire Barrere. It is 21-year-old Hijikata’s second career win against a top 100-ranked opponent.

Hunter fought past world No.74 Tamara Korpatsch in three sets, prevailing 3-6 6-3 6-3 in a two-hour battle. This sets up a final round showdown with world No.76 Viktorija Golubic.

Main-draw matches begin tomorrow, alongside the final qualifying rounds. Kids can enter for free and adult tickets are just $10.

The Adelaide International, a combined ATP 250 and WTA 500 event, is held at The Drive. It forms part of a two-week Adelaide Festival of Tennis, which concludes on 14 January.