Jaimee Fourlis and Jason Kubler will compete for a first Grand Slam title in the Australian Open 2022 mixed doubles final. 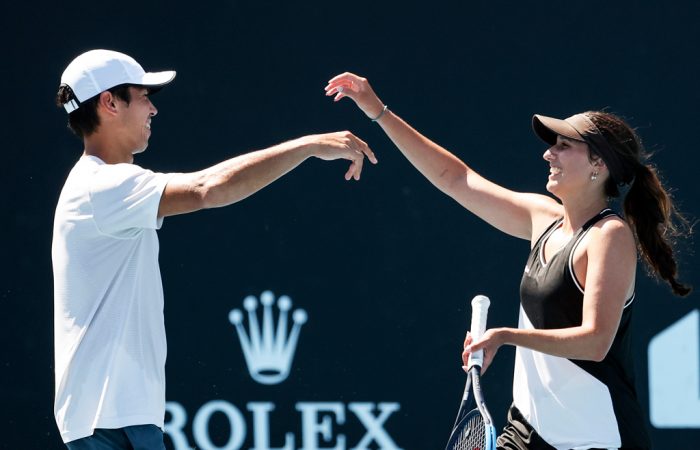 Teamed for the first time at Melbourne Park this fortnight, Jaimee Fourlis and Jason Kubler will compete for a maiden Grand Slam title in the AO 2022 mixed doubles final.

Saving a match point in tonight’s semifinal, the pair stunned Lucie Hradecka and Gonzalo Escobar 2-6, 7-6(2) [10-6] to advance to the championship match.

It follows wins this fortnight over experienced teams including No.7 seeds Nina Stojanovic and Mate Pavic. Compatriots Sam Stosur and Matt Ebden, the AO 2021 runners-up, were also victim to the Australian wildcards.

Welcome to the mixed doubles final 🏆

With their semifinal starting at Rod Laver Arena after midnight, following a five-set men’s singles quarterfinal, Fourlis and Kubler seized their opportunity opponents in style.

After dropping the first set against the accomplished Hradecka and Escobar – who are from the Czech Republic and Ecuador respectively – Fourlis and Kubler appeared to settle into a rhythm in the second set.

While Fourlis was solid all-round, Kubler’s serve was damaging. He recorded seven of eight aces from the Australian pairing, four of them consecutively at one stage.

In the 10th game of the second set, Hradecka and Escobar attacked. Firing a flurry of forehand winners they earned a match point, which Kubler calmly saved with another ace.

From there, the Australians simply became stronger, seizing the second set in the tiebreak and taking control to lead from start to finish of the match tiebreak.

While Kubler’s serve continued to damage, Fourlis was all composure with some stunning net play. A double fault from a nervous Hradecka was perhaps the only gifted point, as the Aussies dominated to take a 6-2 lead.

Their opponents drew it back to 6-5 but Fourlis and Kubler were on a winning path. With some deft Fourlis volleys setting up match point, they immediately secured their place in the final.

In arguably the biggest match of their careers so far, the Australians will face Kristina Mladenovic and Ivan Dodig, who overcame Zhang Shuai and John Peers in the other semifinal, in the final on Saturday.