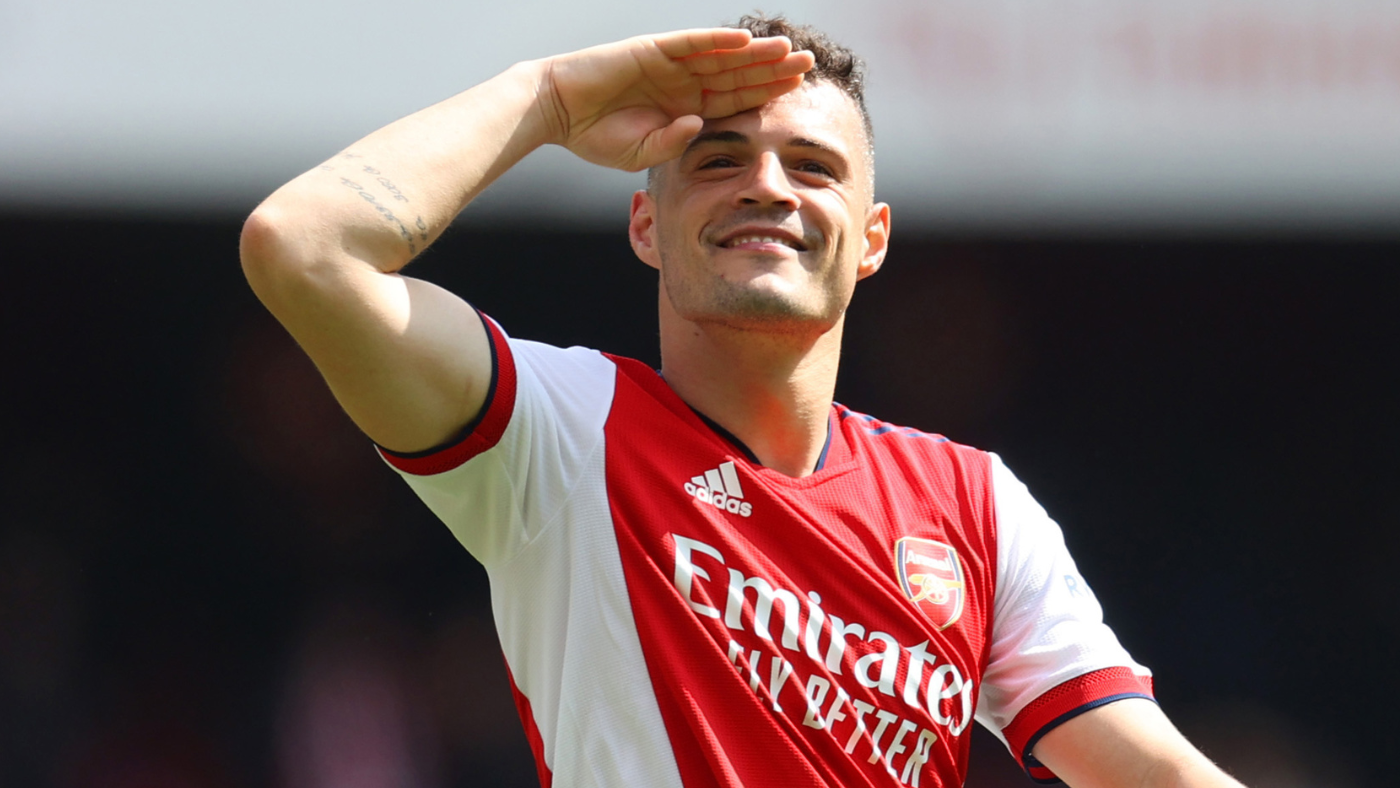 For all the external questions that have dogged Mikel Arteta in his two and a half years in the Arsenal dugout, one thing that has rarely been in question is his footballing brain. A graduate of Barcelona’s famed La Masia academy, a player under Arsene Wenger and an assistant coach to Pep Guardiola: for more than half his life the 40 year old has had a grounding in footballing excellence that he is now translating into Arsenal players.

Even when they labored to consecutive eighth placed finishes, Arsenal players did not falter in their awe over their manager. Bukayo Saka and Kieran Tierney both labelled their head coach a “genius,” while Gabriel Martinelli has predicted that his boss will write his name into footballing history through sheer weight of trophies. Granit Xhaka is no less admiring of the man who kept him at the club at the start of 2020. He just has a different, characteristically brusque, way of making his point.

Arteta is a “freak,” as Xhaka puts it in Amazon’s All or Nothing documentary. It is said with nothing but admiration but it probably merits some degree of expansion.

“I mean [a freak in terms of] how he explains to us the training sessions and the game plan as well,” says Xhaka. “We know exactly what we have to do. Not only the first step but the second and third after, with the ball and without the ball. How we prepare ourselves or how he prepares us is amazing. I never saw something like this before.

“We had a meeting [a fortnight ago] and he showed us one action against Chelsea. I was pressing Jorginho, the holding midfielder and Gabi Martinelli dropped into my position. So normally Gabi Martinelli is a left winger and the coaches say you have to stay with the right back. Or you have to come inside. But he is dropping into the number six [position] at the base.  This is what makes Mikel special as he sees something that other coaches do not see in my opinion.”

Unfortunately Xhaka did not expand on the exact specifics of the moment but we can estimate which particular passage of play he was talking about. Arsenal are 2-0 up in their preseason clash with Chelsea in Orlando, their press suffocating the Blues in their own third of the pitch. The Swiss international, often viewed as a player who lacks the pace to involve himself in final third pressures, is ready and waiting when Marcos Alonso finds himself under pressure from Ben White down the Chelsea left.

The press is clearly posing difficulties for Chelsea but the space Xhaka has vacated might open up opportunities for the Blues too. If Jorginho can get away from his man and turn he might be able to slip a pass through the Arsenal midfield. Martinelli spots that and, as Xhaka noted above, reacts to the threat rather than just doing what is expected of a player in his position.

If Jorginho wants to spread the ball out to the space on the right that Martinelli has vacated then Eddie Nketiah is well placed to punish any miscue. Regardless, if the Italian gets that pass spot on it still puts Chelsea in a much less dangerous position than if they were able to slip a pass through the center and up the pitch.

A little too much exuberance from Xhaka — or perhaps a good eye for the safest escape route from his opponent — hands Chelsea a free kick, but up until that moment Arsenal had done everything right to steal the ball in the most dangerous of positions.

It is far from the only example that comes to Arsenal players’ minds of an occasion Arteta saw something that few others do. Sitting alongside Xhaka at a discussion of the documentary, Aaron Ramsdale’s mind is swiftly drawn to a far more high profile moment, the back to front move in December last year where the Gunners drew Southampton’s press and ripped through it in a matter of seconds.

It was the sort of goal that great Arsenal teams of the past, particularly Arsene Wenger’s sides leading up to the Invincibles, prided themselves on. With 19 minutes and 57 seconds on the clock Gabriel’s back pass has triggered the Southampton press on Ramsdale. By the time the scoreboard reads 20 minutes and 13 seconds Alexandre Lacazette is sweeping the ball into the net, five pressure passes in their own half turning the pressers on their heels, helpless to catch up as the Gunners flew towards the penalty area.

That goal, and the dominant performance it came in, were all the more impressive considering Arsenal had been forced to rip up their tactical plan when the team sheets landed an hour before kick off. “The whole week we were working on a press as they were I think supposed to play a three at the back,” says Ramsdale. “But when we got in the dressing room they were playing a 4-2-2-2 and Mikel changed it and said the strikers will jump and next wingers, full backs etc.

“He had the plan ready for us, told us 45 minutes before kick off, and what he said was bang on.”

The admiration Arsenal players feel for their manager might even lead to them following in his footsteps. Xhaka has started his coaching badges — “I told Mikel to be careful,” he laughs — though at 29 he is in no rush to call it a day at Arsenal. “It’s a shame I only have two years more on my contract. Let’s see what happens after two years. But I am seeing a big, big future for this club.”

Such an optimistic outlook on life at Arsenal would have been unimaginable three and a half years when Arteta arrived and Xhaka was, as he himself puts it, “finished” at Arsenal. He had been stripped of the captaincy after swearing at supporters following his substitution in a 2-2 draw with Crystal Palace. The bridge back to the Emirates Stadium was burned, Hertha Berlin were poised to bring the Swiss international back to the Bundesliga. The new manager changed all that. After one conversation Xhaka decided — without so much as a further discussion with his family — to give Arteta the six months he asked for.

“He is the reason why I’m still at this football club,” says Xhaka. “All of the club knows why I am still here, because three years ago I was gone. My suitcases were packed and finished, but I had a meeting with Mikel when he came – he wanted to hear my opinion about what had happened and I explained to him.

“I remember it exactly: I told him, ‘It has nothing to do with you’ because I didn’t know him and I never played with him. Obviously I knew his name but not the person and I said, ‘I’m gone, I can’t wear the shirt any more.’ He said, ‘Give me a chance for six months and if you are still not happy after six months, I’m the guy who will help you – not to run away, but you can leave.’

“I didn’t speak with family, with nobody, and normally I don’t do that. But I said, ‘OK, Mikel – I will stay for you.’ And I’m still here.” There may be some Arsenal supporters who would rather he was not still there but it is fair to say that number has dwindled since Arteta brought him back into the fray. Xhaka has not been perfect, and still has a temperamental streak that can earn him red cards at inopportune moments, though he might equally note that he appears to be refereed by reputation as much as by action.

If there was a moment that felt like the inverse of the rage at Crystal Palace it might have been last season’s thunderbolt against Manchester United. Celebrating his spectacular strike he blew kisses that may well have been in the direction of his family box but felt like they were for the entire Emirates Stadium. “It was maybe one of the greatest moments since signing for this club,” he says. “Everyone now knows what happened three years ago. Sitting here three years later and to say this was one of the greatest moments, three years ago I would have said this would never, ever happen.

“But I feel much more love from the fans, from my side as well. I am trying to build something with them again. It needs time, for sure, but I have the feeling that we are in a good way for sure.”

It is not just with the supporters. As Xhaka is asked to address his role as something of a captain without the armband, Ramsdale interjects: “He’s integral to our group, playing or not playing. When he was injured at the start of last season, you could feel his presence in the changing room. You can feel his presence when he’s playing.

“I think the captaincy is blown out of proportion. That comes from what’s happened here with having a few captains in the last few years. But then you’ve got the likes of Rob Holding, another who when he isn’t playing is someone everyone talks to. You’ve got leaders who just do it on the pitch.

“We’ve had a few arguments on the pitch, me and Granit, but a type of person who can be a great leader is someone who just forgets about it when you get in the changing room. He’ll have different ways to speak to different people. It gets the best out of me and him together when we have  a little argument. We get back in the changing room and everything is fine.”

Arsenal’s doubters will point out that all this talk of leadership has not translated into the Gunners leading the way in the Premier League nor even making it as far as the Champions League. They might well have a point but to hear the players lay out the reality of this club under its current management is persuasive indeed. The same trick that Arteta pulled on Xhaka is working across the dressing room.