Gabby Gregg of New South Wales and Thomas Gadecki of Queensland have claimed national singles titles at the 2022 December Showdown. 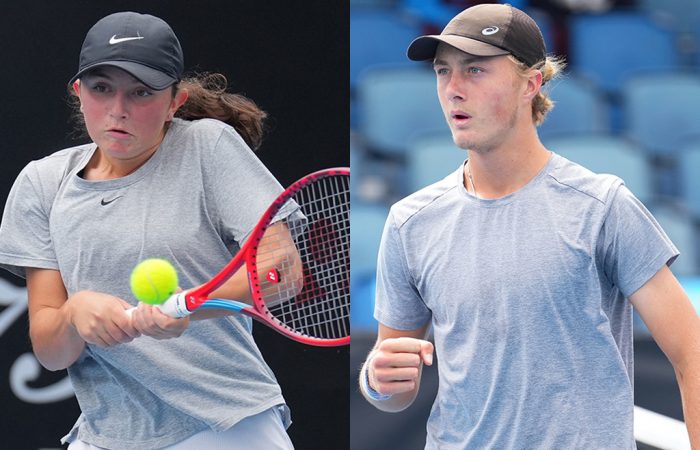 Gabby Gregg has capped off a strong week, and a wonderful year, by claiming the 16/u Australian Championships girls’ singles title at the December Showdown.

Gregg, who helped lead New South Wales to victory in the 15/u Australian Team Championships in May, prevailed 6-2 6-1 against Victorian Gabrielle Villegas in today’s final at Melbourne Park.

The 15-year-old described it as her best performance of the week.

“I feel really great. I’m incredibly happy with the result, me and the team are thrilled,” she said.

“I kept competing from the first ball to the last and I think that’s what I do best.”

The victory earns Gregg a wildcard into the Australian Open junior championships in January, which is a huge thrill for the emerging young star.

“My team and I have wanted this for a long time, it makes us incredibly happy,” she said.

“My main aim was to qualify for a junior Slam. Now that I have, I really want to win one.”

“I really feel in a way I can connect to Ash. She’s not the biggest and I’m not either. But the way she fights and the way she conducts herself is so good,” she said.

> VIEW: Draws and results from the 16 and under Australian Championships

“This feels amazing. It’s been a really big two weeks and it’s had the perfect end,” Gadecki said.

For the Queenslander, this has been a family journey, with his older sister Olivia coming so close to winning titles in previous December Showdowns.

“Having my sister play the final here twice and just miss out, I think this win is huge for all of us,” he said. “It means a lot to me.”

The sky’s the limit for 16-year-old Gadecki, who plans to venture onto the world junior tour in 2023.

“I plan to go overseas and travel the circuit which will be awesome. Hopefully with some big results,” he said.

When asked what it was like to win a wildcard into his first junior Grand Slam tournament, Gadecki’s growing confidence was clear.

“Hopefully the first of many,” he said with a wink.

16 and under Australian Championships