Australian fans are being encouraged to vote in an International Tennis Hall of Fame campaign celebrating Iconic Moments in Tennis. 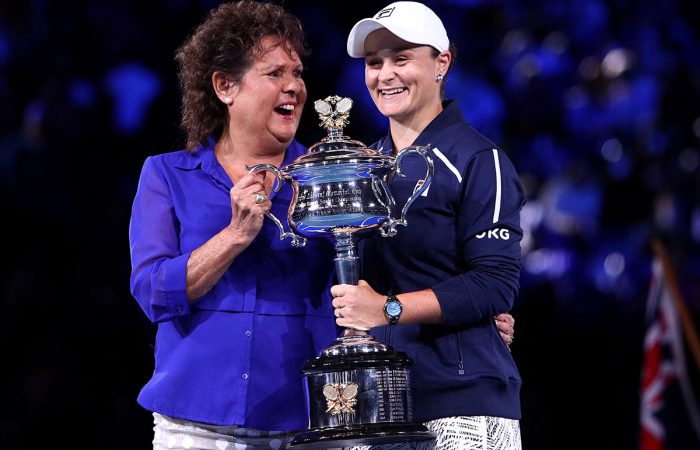 When Ash Barty lifted the Daphne Ackhurst Memorial Cup in front of her heroine Evonne Goolagong Cawley and an enraptured home crowd in January, it was the stuff of fairytales.

Now the Queenslander’s feat in becoming the first Australian singles champion for 44 years is one of several Australian Open memories that have been nominated as Iconic Moments in Tennis by the prestigious International Tennis Hall of Fame.

Barty’s win over Danielle Collins has been named in the Moment of National Pride category, alongside Andy Murray’s historic 2013 victory at Wimbledon, Maria Bueno becoming a national hero in her native Brazil by winning the 1959 Wimbledon title and Li Na’s feat in becoming the first Chinese player to lift a Grand Slam singles trophy at Roland Garros in 2011. Barty’s fellow Australian wheelchair player David Hall is also nominated for his Paralympic gold medal in singles at the 2000 Sydney Olympics.

Voting is now live. Rivalries, comebacks, celebrations and check out the ‘moment of national pride’ category. It’s so cool to be a part of the most iconic moments in tennis history.@TennisAustralia @ITFTennis https://t.co/C1M1DVCiMk

The Australian Open 2022 men’s singles final also gets a mention, with Rafael Nadal’s hard-fought victory over Daniil Medvedev listed as one of the best comebacks in a match. Many Australian Open fans will also remember Jennifer Capriati’s epic fightback against Martina Hingis 20 years earlier, in the baking hot women’s final of 2002. That also made International Tennis Hall of Fame’s list, along with Pete Sampras’ emotional rollercoaster 1995 quarterfinal against Courier, which was played not long after Sampras had been told that his coach Tim Gullickson had terminal cancer. Despite looking spent, a tearful Sampras somehow found a way to win in tribute to his friend and mentor.

The Australian Open also features heavily in the Most Iconic Celebration category, with Petr Korda’s famous ‘scissor kick’ and Jim Courier’s bold leap into a muddy Yarra River both nominated. Australian Pat Cash’s famous climb into the Players’ Box at Wimbledon after his 1987 win – much copied since – is also among the celebrations named.

Other categories of Iconic Moments in Tennis include Most Epic Rivalry, where fans are asked to choose between beloved rivalries – many of which were played out in Melbourne –  such as Nadal and Roger Federer and Chris Evert against Martina Navratilova.

Barty is certainly in some fine company. Hers, like so many other of the iconic moments tennis is lucky enough to have witnessed, was a fairytale worth retelling.

Voting is open until midnight US Eastern Time on 30 April (1 May in Australia) and fans can vote online via tennisfame.com/vote.

Australian Lleyton Hewitt, winner of two career Grand Slam titles, an Australian Open runner-up and a former World No.1, is due to be inducted into the International Tennis Hall of Fame in July.