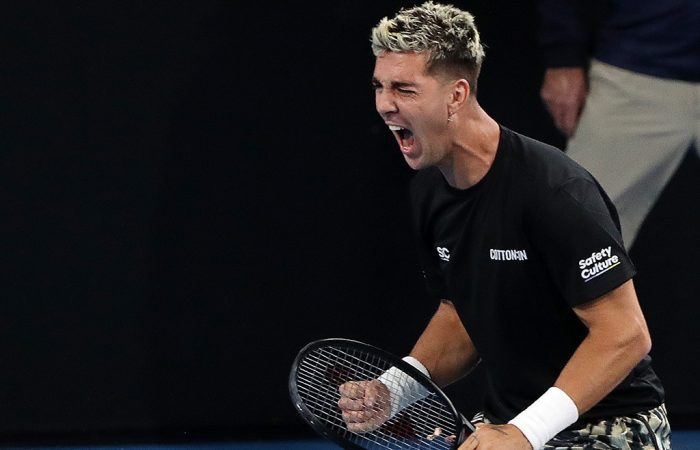 Home-town favourite Thanasi Kokkinakis has made a winning return at the Adelaide International.

The Australian wildcard posted a hard-fought 7-6(5) 7-6(7) victory against world No.34 Maxime Cressy in first-round action at The Drive this evening.

In front of a passionate local crowd, Kokkinakis fired 21 aces to edge out his American opponent in a two-hour and 11-minute battle.

“That was crazy,” Kokkinakis said, thanking the crowd. “The atmosphere and the support helped me get through that.”

It is Kokkinakis’ sixth consecutive victory at the tournament, having scooped his first ATP singles title in Adelaide last summer.

This also marks the 26-year-old Kokkinakis’ first top-50 win since August – and just his third since his title-winning in Adelaide last January.

Kokkinakis now faces either world No.15 Jannik Sinner or Brit Kyle Edmund in the second round.

“I had a really, really tough season last year and to come out after qualifying and to beat a player of his quality just showed the work I did in the off-season is paying off already,” said world No.120 Popyrin.

The Adelaide International, a combined ATP 250 and WTA 500 event, is part of a two-week Adelaide Festival of Tennis. The festival includes back-to-back tournaments and concludes on 14 January.