Australian wildcard Nick Kyrgios has powered into the second round at the Indian Wells Masters 1000 tournament. 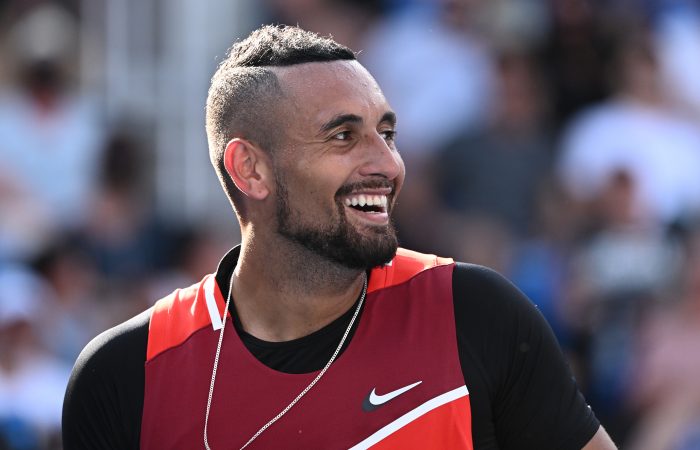 Nick Kyrgios has made a promising tour return, scoring a straight-sets victory against Argentina’s Sebastian Baez in opening-round action at Indian Wells today.

Contesting his first tournament since the Australian Open, Kyrgios posted a commanding 6-4 6-0 win against the world No.60.

The Australian wildcard struck 12 aces in the 72-minute clash, helping him record his first top-100 singles victory of the season.

The 26-year-old Kyrgios, currently ranked No.132, now plays No.32-seeded Argentine Federico Delbonis in the second round.

In just his 3rd match of the year, @NickKyrgios powers past Baez 6-4 6-0 on a windy night in the desert!#IndianWells pic.twitter.com/mp8BCBfDXG

The 28-year-old Aussie posted a 6-3 6-2 victory against China’s Zhang Shuai in women’s singles first-round action. It snapped a five-match winning streak for world No.41 Zhang, who had claimed her third career WTA singles title in France last week.

Saville, currently ranked No.409 as she returns from an extended injury lay-off, will face ninth-seeded Tunisian Ons Jabeur in the second round.

Making strides in the desert 🌴@Daria_gav advances to the @BNPPARIBASOPEN second round after a 6-3 6-2 win over Shuai Zhang. #GoAussies pic.twitter.com/NJSDp6O9ez

Astra Sharma has also progressed to the second round. The 26-year-old from Perth made the most of a lucky loser spot in the draw, defeating world No.62 Magda Linette of Poland 6-4 7-6(1).

It propels world No.96 Sharma into a second-round meeting with 2021 finalist and No.13 seed Victoria Azarenka.