Nick Kyrgios is looking forward to his US Open first-round showdown with close friend and doubles partner Thanasi Kokkinakis. 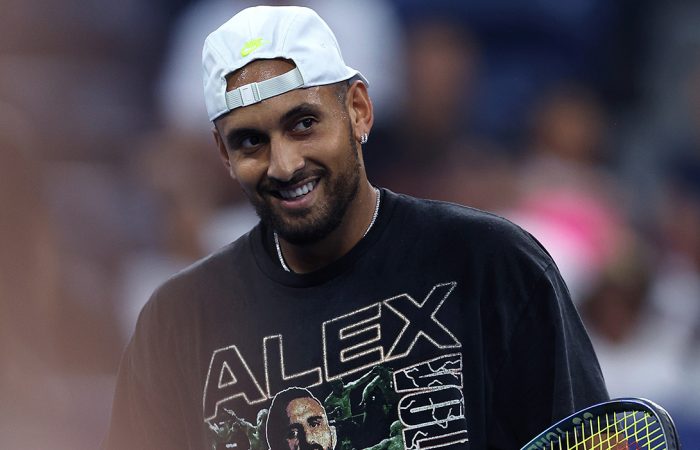 Despite not having met in a professional match in more than eight years, Nick Kyrgios says he is prepared for his US Open first-round clash with Thanasi Kokkinakis – and excited to share the biggest stage in tennis with his good friend.

The two Australians, who combined to win the men’s doubles title at Australian Open 2022, will meet for the first time ever in a tour-level match, and it comes on Monday night (Tuesday morning AEST) at Arthur Ashe Stadium.

Kyrgios leads the head-to-head 3-0, having won their two Challenger-level matches in 2013 and 2014, as well as their Australian Open 2013 boys’ singles final.

While almost a decade had elapsed since he found Kokkinakis across the net from him, Kyrgios said he knew what to expect.

“I feel like I don’t do anything special to prepare for matches. Thanasi and myself know each other’s games pretty well … we practice all the time together. We play doubles. So I feel like we’re both prepared,” Kyrgios told tennis.com.au.

“And it’s just going to be an experience, for us to go out there and play on Arthur Ashe Stadium together is something that’s pretty special.

“There’s still two days until we have to play, so I’m not going to think about it too much. Because I know when we’re out there it’s going to be an emotional roller coaster.

“And it’s going to be a lot of fun – either way it’s something that I’m glad I get to share with him.”

“He’s playing some great tennis right now, but I know on my day I can match it with anyone.”

Kyrgios has historically thrived at Wimbledon and the Australian Open, whereas his record in New York is comparatively lukewarm.

Of his 16 career singles matches at Flushing Meadows, he has won eight and lost eight, and is yet to go beyond the third round.

Perhaps this is the year that changes, given the form he carries into the season’s final Grand Slam tournament.

Since reaching the Wimbledon final, Kyrgios backed that up with the Washington title and a trip to the quarterfinals at the Montreal Masters, beating world No.1 Daniil Medvedev along the way.

In the past three months he has won 22 of 27 matches, simultaneously improving his ranking by more than 50 places to reach world No.26 – an achievement earning him a US Open seeding.

Yet the 27-year-old admitted the cumulative effect of all those matches, plus time on the road, were beginning to take their toll.

“After Wimbledon, and Washington, and everything, I haven’t been able to go home and enjoy it with my family and just take a breath. So I’m extremely exhausted.

“I know that this is my last stop until I do get to go home, so I do have an eye on that. No other tennis players have to deal with that, apart from Australians.

“This is my last little trip and I get to go home. So that’s all I’m thinking about.”