Australian Nick Kyrgios had too much firepower for No.26 seed Filip Krajinovic in their second-round clash at Wimbledon 2022. 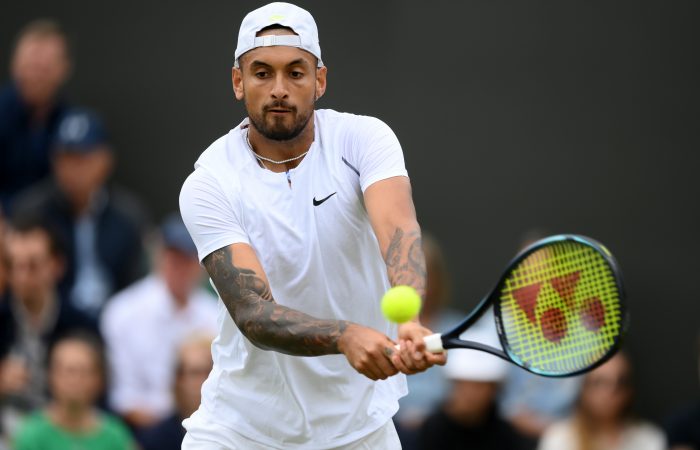 Nick Kyrgios has produced an almost flawless performance to eliminate No.26 seed Filip Krajinovic in the second round at Wimbledon.

The 27-year-old Australian fired 24 aces and conceded only nine points on his service games in a commanding 6-2 6-3 6-1 second-round victory at No.2 Court today.

After a dramatic first-round encounter, where world No.40 Kyrgios was pushed to five sets by British wildcard Paul Jubb, today’s performance was clinical.

Kyrgios raced through an efficient opening set in 26 minutes and without losing a point on serve.

World No.31 Krajinovic, a finalist at Queen’s Club earlier this grass-court season, managed to win five points on Kyrgios’ serve in the second set. But after only 58 minutes, found himself trailing by two sets.

Kyrgios’ dominance continued in the third set, helping the Aussie wrap up victory after 85 minutes on court. He finished with 49 winners and hit only 10 unforced errors.

The victory improves Kyrgios’ record against seeded opponents at Wimbledon to six wins from 12 matches and propels him into the third round at the tournament for a sixth time.

Kyrgios next faces either fourth-seeded Greek Stefanos Tsitsipas or Australian compatriot Jordan Thompson, who face-off in the second round today.

In ladies’ singles action, Australian Ajla Tomljanovic scored a comfortable win against American qualifier Catherine Harrison to progress to the third round for a second consecutive year.