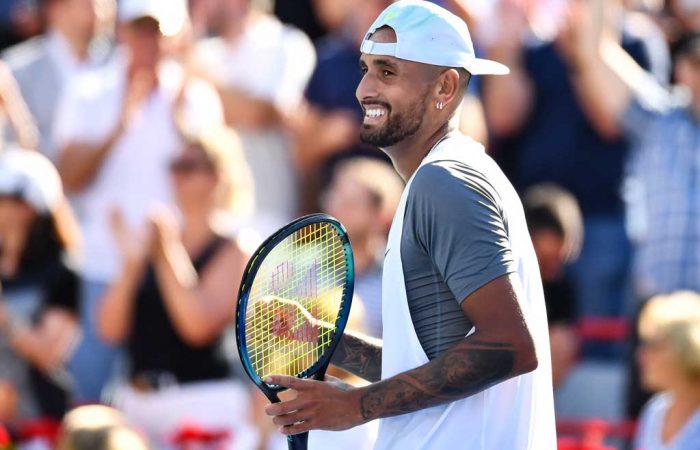 Nick Kyrigos has underlined his status as one of the game’s most in-form players in the North American hard-court season, after storming into the quarterfinals of the Canadian Masters.

Kyrgios required little more than an hour to overcome fellow Australian Alex de Minaur 6-2 6-3, marking his ninth straight match win and his 15th win from his past 16 matches.

The only downside for Kyrgios in another imperious performance was that it came at the expense of a good friend and countryman.

“Today was really hard mentally for me to go out here and play Alex. We’re such good friends,” said Kyrgios following the first ATP-level match between the two Australians.

“He’s been having such a good career so far and carrying the Australian flag for so long. It was just tough mentally. It’s never easy to play a friend like that, especially if they’re Australian.”

Still, there was no mercy from Kyrgios, especially early in the straight-sets win.

In a statement start, Kyrgios claimed a double break of serve to race to a 4-0 lead in just 11 minutes.

While De Minaur eventually settled with a first service hold, Kyrgios had won 17 of the first 21 points. He maintained that momentum to claim the first set 6-2 in 23 minutes.

It was a slightly more challenging second set for the 27-year-old, who claimed an opening break of serve but couldn’t consolidate.

But recovery was swift as Kyrgios immediately gained another break of serve and broke again soon afterwards to take a 6-2 5-2 lead.

While it took two more games for Kyrgios to serve it out, it was ultimately an untroubled progression for the recent Wimbledon finalist.

The latest victory followed his upset of world No.1 Daniil Medvedev yesterday, Kyrgios encouraged that he could maintain the winning momentum.

“(It was) pretty tough,” Kyrgios admitted. “After yesterday’s big high, obviously playing Daniil, and the crowd was amazing. It was a day I’ll probably never ever forget.”

Kyrgios set a quarterfinal with No.8 seed Hubert Hurkacz, who overcame Albert Ramos-Vinolas in three sets.

A coveted spot in New York 🎾@NickKyrgios is now guaranteed to be seeded at the US Open.#OBN22 pic.twitter.com/xTH34FErUZ

From outside the top 30, he also stormed to No.27 on the live rankings – ensuring a seeding for the upcoming US Open.

“It was a goal,” said Kyrgios of re-entering that upper echelon. “More so, so that I didn’t get one of the big titans or gods first round. I can actually work my way into the draw, if the draw’s kind.

“But yeah, look, I always feel as if my game is right there. I feel like no matter who I play – today I felt amazing and hopefully I can keep it going.”

Ellen Perez has advanced to the semifinals of the Canada Open in Toronto alongside American partner Nicole Melichar-Martinez.

Progress came at the expense of a countrywoman, with Perez and Melichar-Martinz claiming a 6-4 6-4 victory over Australian-Chinese duo Storm Sanders and Zhang Shuai.

Perez and Melichar-Martinez took an hour and 10 minutes to record their straight-sets victory at the WTA 1000 tournament.

The Australian, who is ranked No.45 in doubles, is aiming to claim a fourth doubles title on the WTA Tour.

Perez’ previous doubles victories have occurred alongside Astra Sharma at 2021 Guadalajara, Ulrikke lkeri at Tenerife 2021 and Daria Saville (then Gavrilova) at 2019 Strasbourg.