Australians Nick Kyrgios and Ajla Tomljanovic will both face the world No.1s in the second round at this week’s Canadian Masters tournaments. 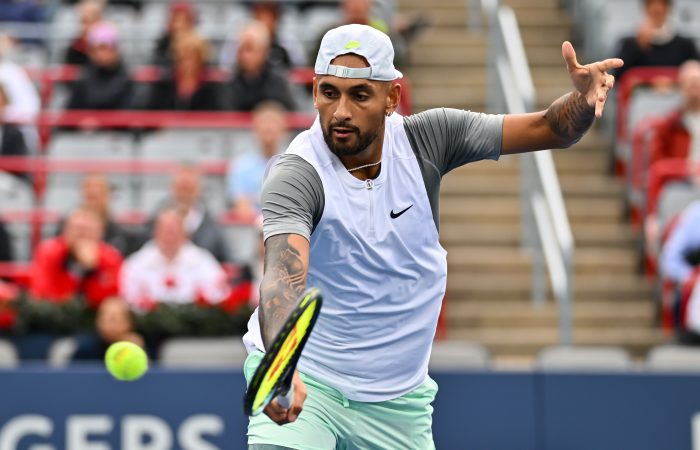 Nick Kyrgios has charged into the second round at the Canadian Masters, setting up an exciting clash with world No.1 Daniil Medvedev.

Kyrgios scored a 6-4 6-4 victory against world No.32 Sebastian Baez of Argentina in first-round action at Montreal today.

It is the world No.37’s seventh consecutive win – and improves his record to 19 wins from his past 22 matches.

“Physically I feel fine. Mentally just so tired. I haven’t had much sleep the past couple of days, but I am trying to put that behind me already,” said Kyrgios, who captured his seventh career ATP singles title at Washington last week.

“I haven’t played great tennis in Montreal in the past, so I wanted to come out here today and get that match up against Medvedev next. It will be a lot of fun. I just want to create some good memories in Montreal.”

Kyrgios boasts a winning 2-1 record against the top-ranked Medvedev, although did lose their most recent meeting in the Australian Open second round earlier this year.

“Medvedev is a hell of a player,” Kyrgios said. “His style is so unorthodox, he is a great competitor and he is just an animal. I am looking forward to seeing where I am at.”

Alex de Minaur has joined Kyrgios in the second round at the ATP Masters 1000 tournament after knocking out Canadian hope Denis Shapovalov.

World No.21 De Minaur only need to play five points to secure a 7-5 7-6(4) victory today, with play resuming in their rain-delayed first-round match at three-all in the second-set tiebreak.

Easiest day in the office 😅@alexdeminaur gets the job done in just 3 minutes to move into R2 in Montreal!#OBN22 pic.twitter.com/CVDUgcLymA

De Minaur faces 15th seed Grigor Dimitrov of Bulgaria in the second round.

Ajla Tomljanovic has recorded an impressive first-round victory against world No.18 Veronika Kudermetova in Toronto.

Tomljanovic proved clutch under pressure, saving 11 of the 17 break points she faced. The world No.72 also made the most of her opportunities, winning five of the six break points she earned.

It is Tomljanovic’s 13th career top-20 victory – and her third since May.

This propels the top-ranked Australian woman into a second-round showdown with world No.1 Iga Swiatek at the WTA 1000 tournament.

Their only previous meeting was in Toronto three years ago, when injury forced Tomljanovic to retire after five games.

Swiatek has been dominating the tour this season, winning 39 of her past 41 matches and has not lost on hard courts since February.