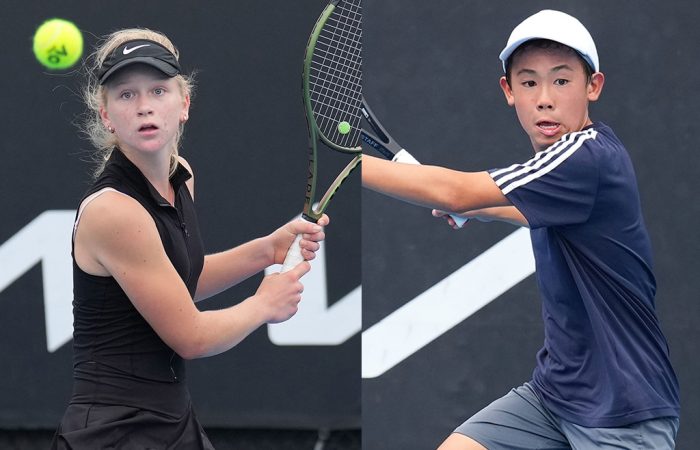 Emerging star Jenson Yokota-Ho has prevailed in an all-Victorian boys’ singles final in the 12/u Australian Invitational Masters at the December Showdown.

The fourth seed played flawless tennis on the way to a 6-3 6-0 win over an impressive Joel Roney, who also enjoyed a sensational week.

“To release all the pressure at the end, I was so nervous on match point but blocked out everything happening in my head.

“I just wanted to focus but it feels so good now that it’s done.

“It’s nice to play my first Showdown and to be where the pros are going to play. I wanted to play everything, so it was great to do singles, doubles, and mixed doubles.”

Yokota-Ho teamed with fellow Victorian Haydon Fa to win the boys’ doubles title and was a mixed doubles finalist alongside Queensland’s Tori Russell.

> VIEW: Draws and results from the 12 and under Australian Invitational Masters

Vesna Marinkov lived up to her top seeding in the girls’ singles draw, scoring a hard-fought 6-2 4-6 6-2 victory over second seed Emilie Chen in a high-quality final.

“This is crazy,” Marinkov said after the match.

“It feels huge, I’ve been wanting this since I started playing. (I’m feeling) so many emotions, happy, excited, everything.

“It is a really great event. I love it here, the courts, the atmosphere and everything about Melbourne.”

Marinkov believes her attacking mindset is her biggest strength.

“I love my forehand, serving wide and hitting open court, and when I play aggressive overall,” she said.

12 and under Australian Invitational Masters