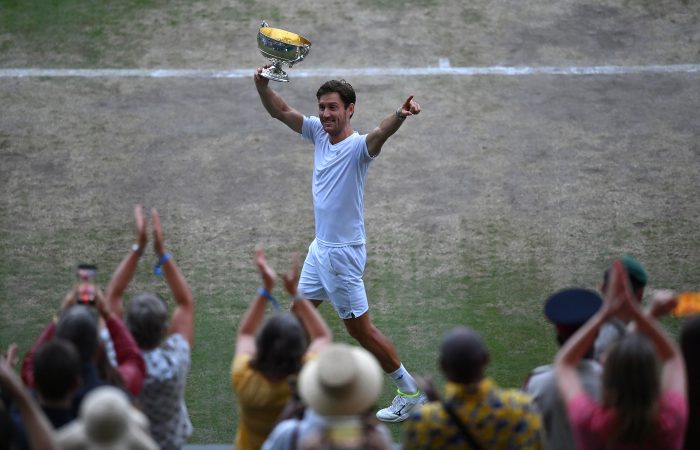 Matt Ebden enjoyed a memorable Wimbledon, becoming the first player to reach both the gentlemen’s doubles and mixed doubles final at the tournament in 16 years. The 34-year-old, who won the gentlemen’s doubles title alongside fellow Australian Max Purcell, reflects on his achievement, and shares an insight into their celebrations.

It’s still hard to truly reflect and digest that I am a Wimbledon champion. It feels very different to anything that’s ever happened to me before. Winning Wimbledon is the most humbling experience and feeling I’ve ever had. Of course, it feels incredible. There are so many amazing great feelings. But it really just feels so much more than that. I think when you win Wimbledon, it’s such a big thing and an iconic institution, that it’s not about you anymore or at all. It’s about the sport, it’s about Wimbledon, it’s about tennis and people coming together to celebrate.

As a team, Max and I have grown together a lot. Particularly in these last few months, but also since we started playing together at the US Open last year. We really believe in ourselves. It means even if we are down in a match, we still believe we can win. We know we have the ability and all the tools, so there’s no reason why we can’t come back – which we showed.

It was so special to celebrate our win with all the fans at Centre Court, sharing the moment as we did a victory lap with our trophies. Then, with all the people out the front of the steps. We also celebrated with the media and live to air with all our fellow Australians back home. We then had a chance to have some food and champagne with our teams and friends and family on the terrace at the All England Club, before heading up to the Dog & Fox in Wimbledon village to celebrate with all the locals and tennis fans. It was very fun and something I’ll never forget.

It was amazing to attend the Wimbledon Champion’s Ball too. I’ve said all along, to be a tiny part of the history of Australians winning at Wimbledon is mind-blowing. To attend the Champion’s Ball with the other champions, and all the past champions and legends of the game, to be a part of that company is insane, but very fun. We had a lot of great moments, with a lot of great people, that night.

At the moment, flights home to Australia are a nightmare in terms of availability and price. Luckily after winning Wimbledon, it meant we could upgrade and fly home comfortably. It was surreal to be greeted by the media and fans upon returning to Perth, that is something I’ll also never forget.

From almost missing the birth of his first child to runner-up in the men’s doubles in the AO, and now triumph at Wimbledon. @StampyMichael #9News pic.twitter.com/5NtJfqJjQJ

I enjoyed a busy 10 days at home, celebrating with all our friends, family, the tennis community and media. We even had people fly in from all across the country to celebrate with us. It has been really humbling, emotional and, of course, extremely fun and exciting all at once. It’s still hard to describe the feelings. Everyone asks if it has sunk in, but I’m starting to feel like it never will. I think winning Wimbledon is such a part of folklore, that it doesn’t really feel real. I’m very grateful it happened and excited to go for more.

I’m back on tour now and teamed up with Max again at Atlanta this week. The next stops are Los Cabos, Montreal and Cincinnati, before the US Open at the end of August.

My wife Kim and our five-month-old son Harvey are enjoying some extra time at home following their two-month trip. It was very demanding and challenging for them, but, of course, so amazing too. Harvey is only just re-adjusting to his sleep patterns and jet lag, so both he and Kim need some time at home to recover and will stay in Perth for a few more weeks at least. Hopefully, they might be able to get over for the US Open.

This is the final instalment of Ebden’s travel blog, which the world No.33 has been writing exclusively for tennis.com.au for the past three months.