Ajla Tomljlanovic has credited a “career changing” mental shift for a season that featured back-to-back Grand Slam quarterfinals at Wimbledon and the US Open and a best-ever ranking of world No.33. 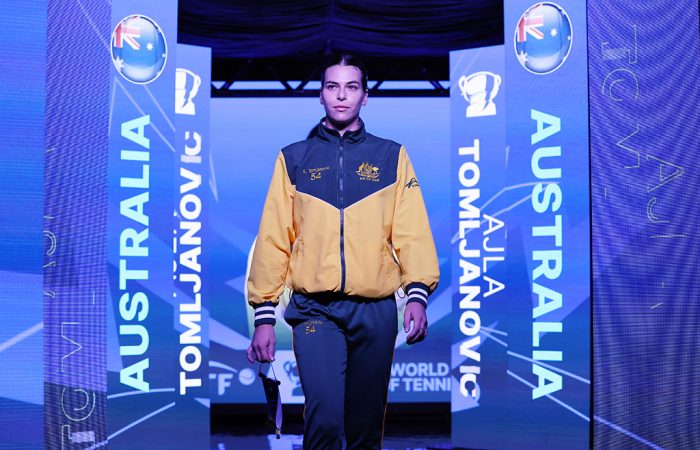 Ajla Tomljlanovic has credited a “career changing” mental shift for contributing to her increasing professional success.

The 29-year-old finished 2022 at a career-high ranking of No.33, her season defined by results that led to back-to-back Grand Slam quarterfinals at Wimbledon and the US Open.

In the past week, she also helped progress Australia into the Billie Jean King Cup final in Glasgow to close her season on a memorable note.

Tomljanovic described playing for her country as “something way bigger than yourself”. She said the presence of teammates on the sidelines added a layer of pressure and nerves – but also made the experience more special and rewarding.

That pressure is something Tomljanovic has learned to acknowledge and embrace, helping her attain bigger milestones and cross new frontiers in the sport.

“What I’ve done in the last few years, I was very open about talking to my closest ones with anything that I’m dealing with,” Tomljanovic said.

“When I was younger, I used to keep it all inside, because I thought it was weakness if I come out before a match and I’m like saying, oh guys, I’m really nervous. I thought that was the biggest crime to say.

“It took me a little bit of time to realise that’s actually going to help you. It’s not like if you don’t acknowledge it, it’s going to go away. But when you actually acknowledge it, it takes the pressure off. And it’s like, well it’s OK that you’re feeling that way; it would be weird if you’re not.

“Just talking about anything that I’m feeling, I mean literally can solve the current issue within minutes. I can feel my body relax as soon as I talk to my parents or my psychologist, my friends.

“It just makes you feel normal, it doesn’t make you feel like an alien because you’re feeling, I don’t know, anxious, or negative, or like the world is sometimes ending. It’s all OK.

“I wish I knew that when I was younger, but at the same time, it was my journey, and it is what it is.”

Tomljanovic laughed as she said she was simply grateful to have eventually arrived at this point.

Now that she is here, she is producing results that have been years in the making.

She first reached the second week of a Grand Slam at Roland Garros in 2014, yet it was not until seven years later that she returned to that stage, thanks to a fourth-round run at Wimbledon in 2021.

She progressed to her first major quarterfinal that fortnight at the All England Club, but it came via an Emma Raducanu retirement in the second set.

This made 2022’s Wimbledon fourth-round win over Alize Cornet feel all the more special.

“I think (that’s) the most emotion I’ve shown ever, after a match. I don’t know if they (the cameras) caught it, but I cried at the bench,” said Tomljanovic, who identifies this win as a season favourite.

“It felt amazing. Because I will be honest, I thought it was a really big task to make quarters again. Playing fourth round, instead of quarters, is still a big difference. You still didn’t back up the same result.

“I feel like I really won these matches, where maybe last year there was a little bit (of an asterisk with) Emma retiring… So this year definitely felt like just more full circle.”

She then went on to produce a string of phenomenal performances at the US Open, none more stirring than her third-round win over Serena Williams.

> READ MORE: Tomljanovic reflects on Serena victory at US Open

It took Tomljanovic six match points and more than three hours to subdue the hometown hero – in front of a 23,000-strong partisan crowd – in what was the last match of Williams’ legendary career.

These performances all combined to showcase Tomljanovic’s impressive composure and resilience – psychological aspects of her game which she has honed.

She is hoping this will prepare her well for a strong showing in 2023 at the Australian Open, a tournament which comes with a unique pressure.

“I feel like everyone in Australia wants you to do well. You can feel the support from your practices, and you can see, just like when you walk out on the court, how much they want you to win. And then you just want it even more. Sometimes for me, it’s not helpful, because I already want it a lot, and if I’m adding more, it’s a lot,” said Tomljanovic, who is yet to pass the second round in eight appearances at Melbourne Park.

“I need to compartmentalise, and kind of go into my tunnel vision, and just know that I have them (the fans) there for my support, but I just need to also take it one moment at a time, and be like, OK, this is what I have to do. Because when I go too much into my emotions, like anyone I lose myself sometimes, and it becomes too much.

“But also, I prefer it that way than not caring.”