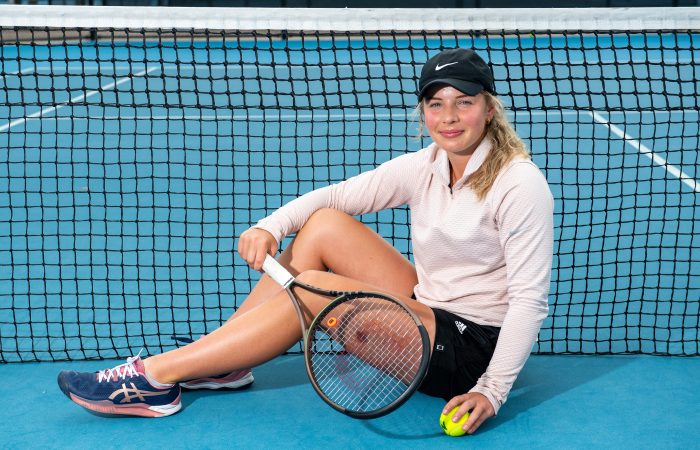 After two injury-interrupted years, Mia Repac is beginning to make her mark in professional tennis.

The 18-year-old from New South Wales has made three ITF quarterfinals and won 15 of her 25 matches since July. This has helped Repac gain her first WTA ranking points.

In our series profiling Tennis Australia’s National Tennis Academy athletes, Repac reflects on her biggest influences and the important lessons she has learned so far in her young career …

Can you tell us about your start in tennis?

I was six when I started playing and it was because of my dad. He used to play with his friends in our hometown of Wollongong. I used to go and watch and cry on the umpire chair asking to play, so he decided to put me into Saturday morning squads just for fun and I’ve advanced from there.

What do you enjoy about tennis?

I just love competing and working hard. It’s really fun. I like meeting a lot of people and getting to travel to different places around the world too.

How much travel have you done so far in your career?

I’ve been a lot to Asia, a lot around Australia, all the different states. I’ve been to Europe a few times and America.

Do you have a favourite place you’ve travelled?

I love Europe, especially in summer. I love the weather, the people there and the food.

What are your tennis dreams?

My tennis dream is to get to the top 10 and play at all the Grand Slams.

Who have been the biggest influences so far in your career?

Have you modelled your game on anyone in particular?

I like Simona Halep, so I’ve always tried to play like her. She’s obviously very aggressive too, loves her backhand. I watch a lot of her matches to see her tactics and how I can incorporate those into my game.

Who are your other favourite tennis players to watch?

Victoria Azarenka is always someone I’ve admired from a young age. I’ve always loved the way she plays and fights on the court and how she’s aggressive. That’s how I like to play too.

Are there any Australian players that have inspired you?

I’ve always liked watching Sam Stosur and Ash Barty, they’re both amazing. I love Ash’s variation and how she dominated with her slice and her all-round game.

Have you spent any time with Ash when she was training in Brisbane?

I’ve seen her here a few times. I was meant to hit with her once, but unfortunately got injured, so I wasn’t able to.

How did you feel about having the chance to hit with a world No.1?

I was pretty nervous. Even just walking around and seeing her in this environment is really cool.

What has been the proudest on-court moment so far in your career?

Probably playing my first Grand Slam, which was juniors at the Australian Open in 2020. That was a really great experience. Having all my family and friends being able to watch me in Melbourne was really cool. 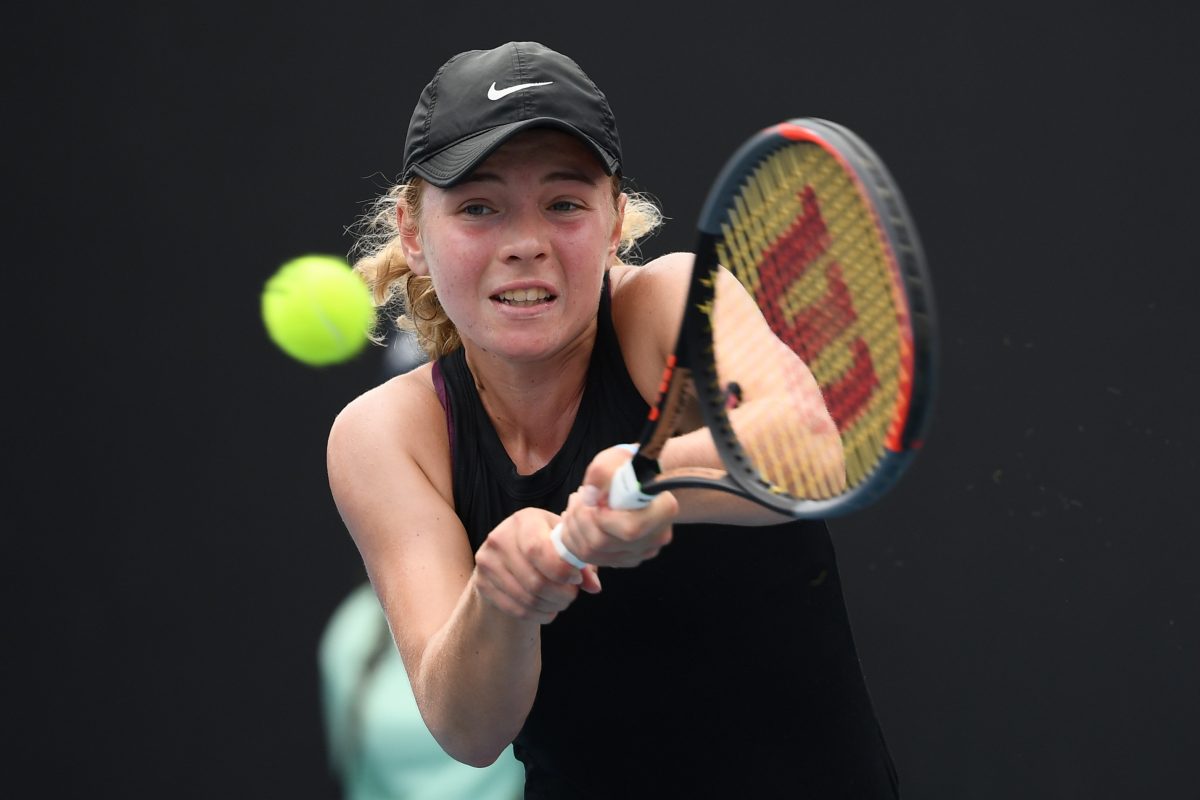 What were your emotions like contesting your first Grand Slam?

They actually put me on a show court for my first match, so I was very nervous. I had a bit of a crowd too. It was kind of my first big crowd, so I had a lot of emotions. But it was good that I was able to overcome them and play good tennis.

What were the biggest lessons you took from that experience?

Being able to stay focused on the court, that was a big one. I had to try not to get too distracted and not think too much about who’s watching or who’s around.

Are you still studying, as well as competing?

I’m in my first year of university, studying a Bachelor of Business. It is 100 per cent online, so that enables me still to train full-time and do my uni in my spare time. I’m enjoying it, it gives me an opportunity to switch off from tennis and focus on something else.

What advice would you give to other young people wanting to pursue a tennis career?

I always like using Cristiano Ronaldo’s quote, ‘talent without working hard is nothing’. That’s definitely important in tennis. You’ve got to work hard and push through, even if you do have the talent.

Does training at the National Tennis Academy inspire you to work harder?

A hundred per cent. It’s really inspiring to look up to the older players and want to be like them, then you have the other girls your age and younger pushing you to always want to do more.

It’s been good. It can be difficult at times too just because it’s a lot of tennis. But I’ve enjoyed living with other girls who are similar ages and I’ve made a lot of new friendships.

Can you describe your playing style in one sentence?

I like to play very aggressive – that’s definitely my game, taking the ball early, shortening the points a lot.

What’s your biggest strength as a player?

I’d say definitely my backhand. A backhand down the line is a shot I always try to look for.

If you could steal any stroke from another player, what would it be and why?

I’d say probably Nick Kyrgios’ serve, he’s so relaxed and can hit them so hard and fast.

I tend to like eating the same meal during a tournament, normally something like steak with mash and veggies so I’m getting enough protein and carbs before a match.

Tell us your favourites in the following categories:

Food: That’s a tough question. I really like traditional Serbian food. My grandma cooks a dish called sarma, which has cabbage, meat and rice, which I love.

Playing surface: I’m definitely a hard-court player, just because I grew up mainly playing on hard and it is what I’m most comfortable on. I like the way the ball sits, and you don’t have to slide as much.

Who would be your dream doubles partner?

Probably Martina Hingis. She had such a great career, in singles and doubles. I liked her all-round game, her volleying, her variation, and I think she would be amazing to play with. 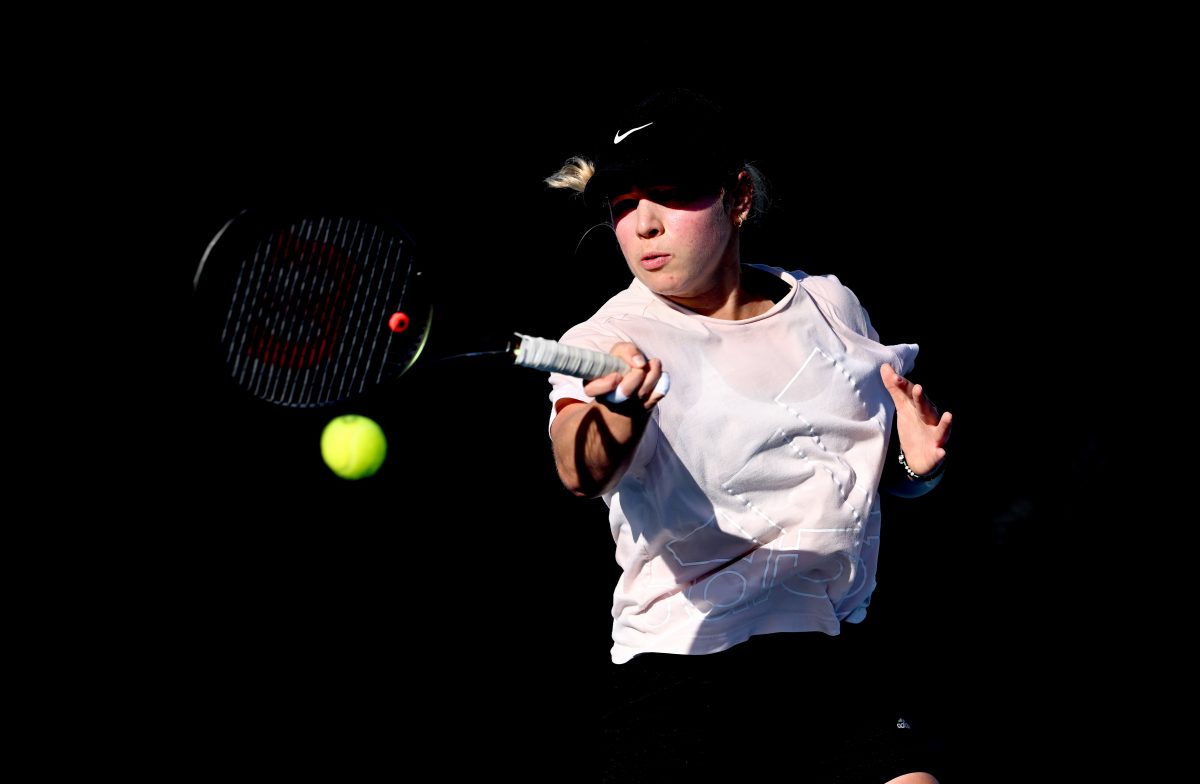 What is your earliest Australian Open memory?

I probably started watching when I was like eight or nine. I remember going to Melbourne for my first AO and I loved it. I was trying to get my ball signed by everyone.

Do you remember the first autograph you got?

It might have been Novak Djokovic, we always used to watch him play at Rod Laver Arena. I’d always be waiting for the players after a match trying to get a signature.

How would your friends and family describe you?

That’s a hard question. I think they’d say that I’m very hard working. I like to keep everything in my control and I’m pretty fun to be around.

Do you have any siblings who play tennis?

I have one younger sister, but she’s the complete opposite of me. She doesn’t play at all.

What are your tennis goals?

I’m just coming back from a really big injury, so my short-term goal is to get my ranking up. I’d really like to play the Australian Open next year.

What injury have you been dealing with?

I had back problems, which put me out for a very long time. So, I’m just grateful to be back out on court.

Were there any silver linings to this experience?

Definitely. I’m kind of grateful because it allowed me to focus on completing year 12 last year. I learnt to be patient and not get too upset. I tried to stay really hopeful and always think it’s going to get better.

Were you nervous to return to competition?

It was very nerve-wracking. I had a lot of doubts, especially in my first matches back. I didn’t know what to expect, but it was just really good to be back out there.

What are the benefits of being in the National Tennis Academy?

I love all the support we get, it’s unreal. Having the physios, coaches and personal trainers in one spot is really convenient. It’s an amazing environment.

Was it a difficult decision for you to move to Brisbane from Sydney?

It was a big decision, but I always knew Sydney was only an hour-and-a-half flight away, so I’m not too far from home.

You’ve been working with David Taylor, who has previously coached Alicia Molik, Sam Stosur and Ajla Tomljanovic. How has he helped your game?

He’s got so much experience and is very knowledgeable, so I’m really grateful to have him as a coach. He has really already helped me so much with my game. He’s identified all my weaknesses, and we’ve been working hard and already I’m feeling so much better on the court.