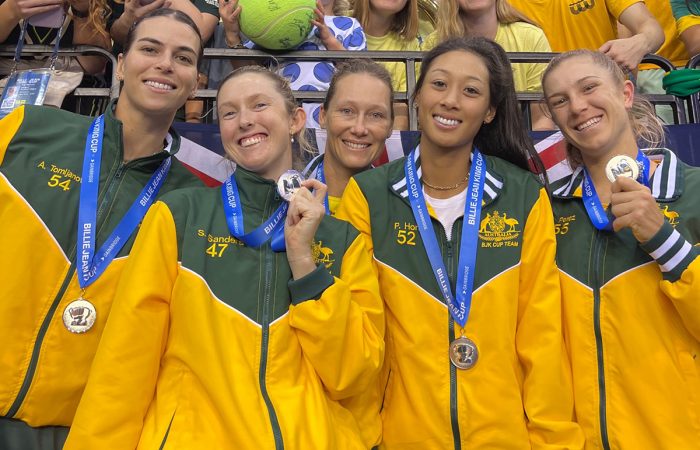 Australia has fallen just short of winning the 2022 Billie Jean King Cup – but captain Alicia Molik could not be prouder of her team.

“It’s been phenomenal. I’m incredibly proud of this whole team, including the extension of the staff,” said Molik after Switzerland recorded a 2-0 victory in today’s final.

Earlier in the week, Australia scored impressive victories against Slovakia, Belgium and Great Britain to progress to just their third final in the past 30 years.

Congratulations on a great campaign Team Australia, we’re very proud of you. https://t.co/DYQSFbIxRB

Molik believes the camaraderie between the Australian players is key to their team success.

“I’m fortunate that I have a group of five mates. They bring out the best in each other,” she said.

“They are a dream in the sense of they are genuine, caring, loving, supportive friends to each other. And what I’m mostly proud of is the level of respect that each player has for not just each other, but in particular, all the staff members of the team.

“They treat everyone as equals, and that’s really important when you have an entire team where everyone plays a different role. The focus is obviously the players, but I think they really share in their victories and practices and have a lot of respect for everyone on the team.

“They’re great people, great individuals. I think that shows on the court. That’s why, I think, every player here has a pretty decent fan base out there on the WTA Tour, because they don’t just give great efforts, but they give a bit of themselves too in terms of their personalities on the court and then what they give off the court.”

Molik is also appreciative of the support from Australian fans and hopes her team’s efforts this week provide inspiration for young players.

“It does bring a lot of interest,” Molik said, acknowledging the benefit of success. “And we have now got a lot of young juniors that aspire to be in the position of these players. That’s what they have created for themselves.”