After a magnificent 2022 season, Taylah Preston is now in the junior world’s top 10 and is targeting more professional tournaments in the next step on her tennis journey. 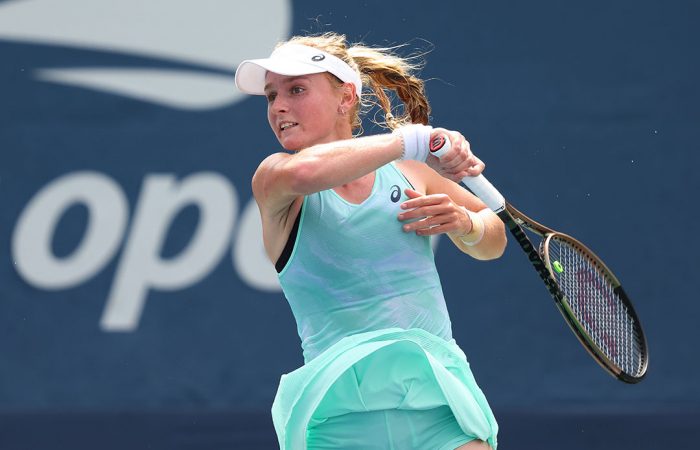 Her ascent has occurred during a magnificent 2022 season in which she has excelled in both singles and doubles, most recently advancing to the US Open girls’ doubles semifinals with American Liv Hovde.

And there have also been encouraging signs as the West Australian has dipped her toe in the professional tennis waters.

“This is my first real year of playing all the (junior) tournaments, so it’s definitely given me a lot more experience,” Preston told tennis.com.au.

“I think the more that I can start playing against the top juniors, as well, I think it’s helped my game a lot.

Preston ended the 2021 season as the junior world No.160 but quickly ascended as the 2022 season commenced, winning 16 of her first 18 singles matches – including back-to-back titles in Canberra and Thailand.

By May, she was already in the top 50, and in June she claimed her third singles title of the season – the Grade 1 grass-court title in Nottingham – to crack the top 20.

She won at least one round at all four junior Grand Slams, her best results being trips to the last 16 at Roland Garros and Flushing Meadows.

And she enjoyed wins against many of the world’s top junior players, including Hovde (the Wimbledon champion) in Traralgon, Sofia Costoulas (the AO finalist) in Milan, and Angella Okutoyi (the Wimbledon doubles winner) at the US Open.

Alexandra Eala, the eventual champion in New York, ended Preston’s run in the third round, but not before a second-set tiebreak.

And then came her run to the last four in doubles, alongside Hovde. “(Liv and I) are just really good friends,” Preston explained of the partnership.

“I was super happy for her (winning junior Wimbledon). I think a lot of the top girls are quite similar in ability. Anyone (can win) on the day.

“I was actually lucky enough to go in Arthur Ashe (Stadium) and watch a bit of Coco Gauff, who’s obviously not that much older than me. So I think that was great for me to see, like there are people just (slightly) older than me, they’re playing on the big court.

“(Her fourth-round match against Zhang Shuai) was really good. I think that was great for me to see, and learn what I need to do so that I can be able to play on that court.”

Preston’s first taste of professional tennis came in January, in the qualifying rounds of the WTA Melbourne Summer Set, then Australian Open qualifying.

In June she won another round of qualifying in ‘s-Hertogenbosch and made her way into her first WTA main draw, where she pushed 172nd-ranked Arianne Hartono to three sets in the opening round.

Preston said these results gave her belief her level was good enough to compete against seasoned opponents on the women’s tour.

“Obviously I haven’t played a real top, top player who’s in their prime,” she said.

“I think some of the older girls are definitely a bit stronger physically than I am. They move a bit better, they’re a bit stronger out wide, they’ll get more of my balls back as well; like I can hit a good shot, and they hit it back like two times better.

“So I think it’s also learning to deal with that, and just getting myself physically stronger, so that I can help deal with that as well.”

Preston, who most enjoyed watching Maria Sharapova and Serena Williams when developing her game in Perth, is targeting more appearances at the professional level in the weeks and months ahead.

And judging by the way her game, form and results are trending, she could have an increasing impact.

“At the end of the year there are some Pro Tours in Australia that I’m definitely going to play. And trying to do well in those, so I can start building my women’s ranking up,” she said.

“I think next year I’m definitely planning to do a lot more women’s (events) than juniors.”