After blazing starts to the 2023 season, Alexei Popyrin and Thanasi Kokkinakis are determined to maintain momentum at the Australian Open. 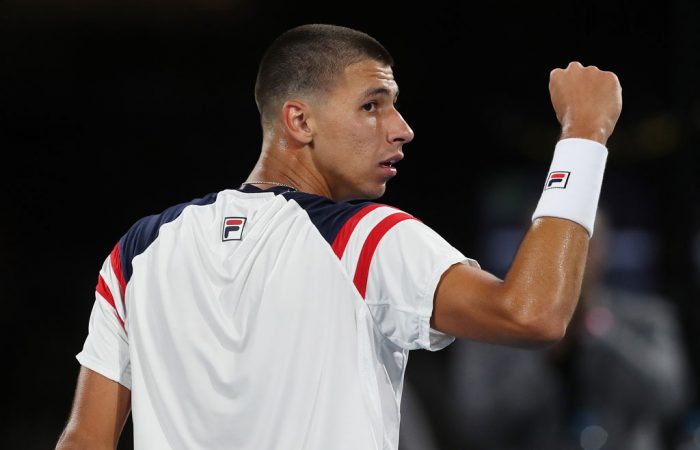 It has been a bright start to the year for Australian Alexei Popyrin, and he is eager to keep the momentum rolling at Melbourne Park this week.

“I’m very excited. For me, this is my favourite tournament of the year,” said the 23-year-old Popyrin, who  kicks off his AO 2023 against Tseng Chun-Hsin of Chinese Taipei.  .

“I’ve played three five-setters in two years on that court. I’m lucky to be back here competing again, trying to get that crowd going.”

Popyrin, currently ranked world No.113, has won seven of his past nine matches, including four in a row to start this year. He’s confident that the home crowd will add to that momentum at Melbourne Park.

“I think it gives every Australian that drive, that extra motivation to get out there on court and give your all,” he said.

Popyrin reflected on the lessons from his toughest year on tour in 2022, as he establishes the foundations for his top-100 return.

“Last year for me was a big learning curve. It was an experience that I never expected would happen to me, to drop half my ranking backwards,” admitted Popyrin, who has added former pro Xavier Malisse to his coaching team this year.

“But it’s something that happened and something I have to learn from, which I think I have done. I’ve invested heavily in my team in the last few months. We’ve done some really, really good work.

“I feel like I’m in a good space right now. I have some confidence coming into this AO. At the start of the year, it’s really important to have that confidence.”

Popyrin made his ATP title with victory at the 2021 Singapore Open and is confident the road ahead is bright for several Australianas men.

“We’ve got such a deep, deep roster in Australian men’s tennis right now. We’ve got a lot of high-quality players,” he said.

Thanasi Kokkinakis, who is making an eighth Australian Open main draw appearance, is among the talented group Popyrin is referencing.

Kokkinakis now calls Melbourne home and is excited to take to the court before a supportive crowd.

“It still gives you chills every time you walk out there. It’s the best,” Kokkinakis said.

“I love this city more than anything. Just the buzz and the atmosphere around a Grand Slam, especially in the state you’re living in, it’s pretty special.”

Kokkinakis is coming off another deep run at the Adelaide International, with a semifinal loss to Roberto Bautista Agut occurring 12 months after he won the title.

“I think I’ve got a bit more in me this time than I did last year,” said 26-year-old Kokkinakis.

“I got a Tuesday (start) which helps. I probably needed one more day last year.”

Kokkinakis lost his opening round match to Germany’s Yannick Hanfmann at AO 2022 in straight sets, having played nine times in the previous 12 days.

“I still wouldn’t have changed it for anything, winning that title last year in Adelaide,” he added. “This year I come in a little fresher, with a couple more days up my sleeve to get used to it.”

Kokkinakis is also prepared to use the crowd more than he did 12 months ago, after admitting he tried too hard to stay in his own bubble last year.

“Last year I was trying to kind of combat the crowd a little bit by kind of being relaxed and try to focus on myself. I don’t think I brought enough energy.”

Kokkinakis is ranked world No.159, but with wins over Maxime Cressy, Andrey Rublev, Alexei Popyrin and Miomir Kecmanovic already this year, he feels his best tennis is close.

“Although I won the tournament in Adelaide last year, I feel like I’m playing better tennis this time around,” he added.

“I want to reach my career high again. My goal is to try and win another title and break inside the top 50.”

Kokkinakis launches his AO 2023 campaign against Italian veteran and former world No.9 Fabio Fognini on Kia Arena on Tuesday.