Preview: Daniil Medvedev and Novak Djokovic Square Off With History On The Line | ATP Tour


Daniil Medvedev is intent on denying Novak Djokovic’s bid to become just the third man to complete the Grand Slam in Sunday’s US Open final. But his motivation runs much deeper than becoming a footnote in tennis history.

After two runner-up finishes in major finals, the 25-year-old is more than ready to join the club of Grand Slam champions and begin building his own legacy on tennis’ greatest stage.

Twice before he has done his level best to overcome heavy odds in a Grand Slam final: at Flushing Meadows two years ago, when he came close against Rafael Nadal and at this year’s Australian Open, where Djokovic comfortably had his measure. Should he snap the Serbian’s major winning streak one win shy of a flawless 28-0 in 2021, the historic spoiling act would count little to Medvedev when compared to the personal reward: a maiden Grand Slam trophy.

“I think from my side, of course… if I can make this, I’ll probably be in the history books a little bit somewhere like not letting him do this. But I don’t really care about it. I think it’s more about him, that it affects him,” Medvedev said.

“From one side, for sure he’s going to feel the pressure a little bit about it… From the other side, that’s what’s going to make him be even better in tough moments… Here we know that he will do everything to try to make it happen… I’m just going to throw it everything, and I’m definitely not going to be thinking about [his] Grand Slam or whatever.”

Cervara On Medvedev: ‘Adversity Makes Him Find His Best’

Medvedev stands to become the first Russian man to triumph at this level since Marat Safin at the 2005 Australian Open. He has dropped just one set this campaign – to qualifier Botic van de Zandschulp in the quarter-finals – cruising past 24th seed Daniel Evans and 12th seed Felix Auger-Aliassime either side of that clash.

It has been a far more straightforward run to his second US Open final than two years ago, when only two of his six matches en route to the final came in straight sets. “Two years ago was a completely different tournament. First of all, the story with the fans. This year kind of didn’t have anything. It was just smooth,” he said.

“[In] 2019, actually before the story with the fans, I was cramping, couldn’t almost walk in my second-round match. I managed to win it [d. Dellien], almost couldn’t walk. There were some crazy matches, some crazy turnarounds.

“I remember playing against [Stan] Wawrinka, I tore my quadriceps… I managed to win the match. I had two days off, so I managed to heal it… This year I didn’t have the stories, and that’s a good thing. I have the experience of two finals of Slams that can help me… The only thing I can say is all that I have left, I’m going to throw it out on Sunday.”

The top two players in the world with history on the line.

It doesn’t get any better than this. pic.twitter.com/r6ZlGLaWXo

Djokovic leads the pair’s ATP Head2Head 5-3, including their only meeting this season for the first of his three majors this season. Before Medvedev’s straight-sets victory en route to the 2020 Nitto ATP Finals they had taken a set off each other in their previous four clashes, dating back to Djokovic’s fourth-round Australian Open win in 2019.

“It’s going to be a battle against another guy who has been in tremendous form, Medvedev. He’s won a lot of matches on hard court so far. We played earlier this year in the Australian Open final,” Djokovic said.

“He’s already had a couple of Grand Slam finals behind him. I think experience-wise it’s different for him now. I’m sure he’s going to give it all to win it, to win his first Slam.

“On the other side, I’ll be giving it all I possibly got in the tank to win this match. I’m focusing on recovery, recalibrating all the systems basically for Sunday. I’m not going to waste time or energy on anything that can just be a distraction and deplete me from the vital energy that I need.”

Rod Laver – the last man to have completed the Grand Slam, in 1969 – watched on from the stands in Arthur Ashe Stadium on Friday night as Djokovic denied fourth seed Alexander Zverev in the semi-finals. It was an unprecedented 10th time in a major this year he had prevailed having dropped the opening set.

It was the fourth straight time he had done it this US Open after he stopped Kei Nishikori, Jenson Brooksby and Matteo Berrettini in succession. On top of the chance to match Laver’s feat, there was something more at stake for the World No. 1 – the chance to pull clear of his Big Three rivals with a 21st major trophy. 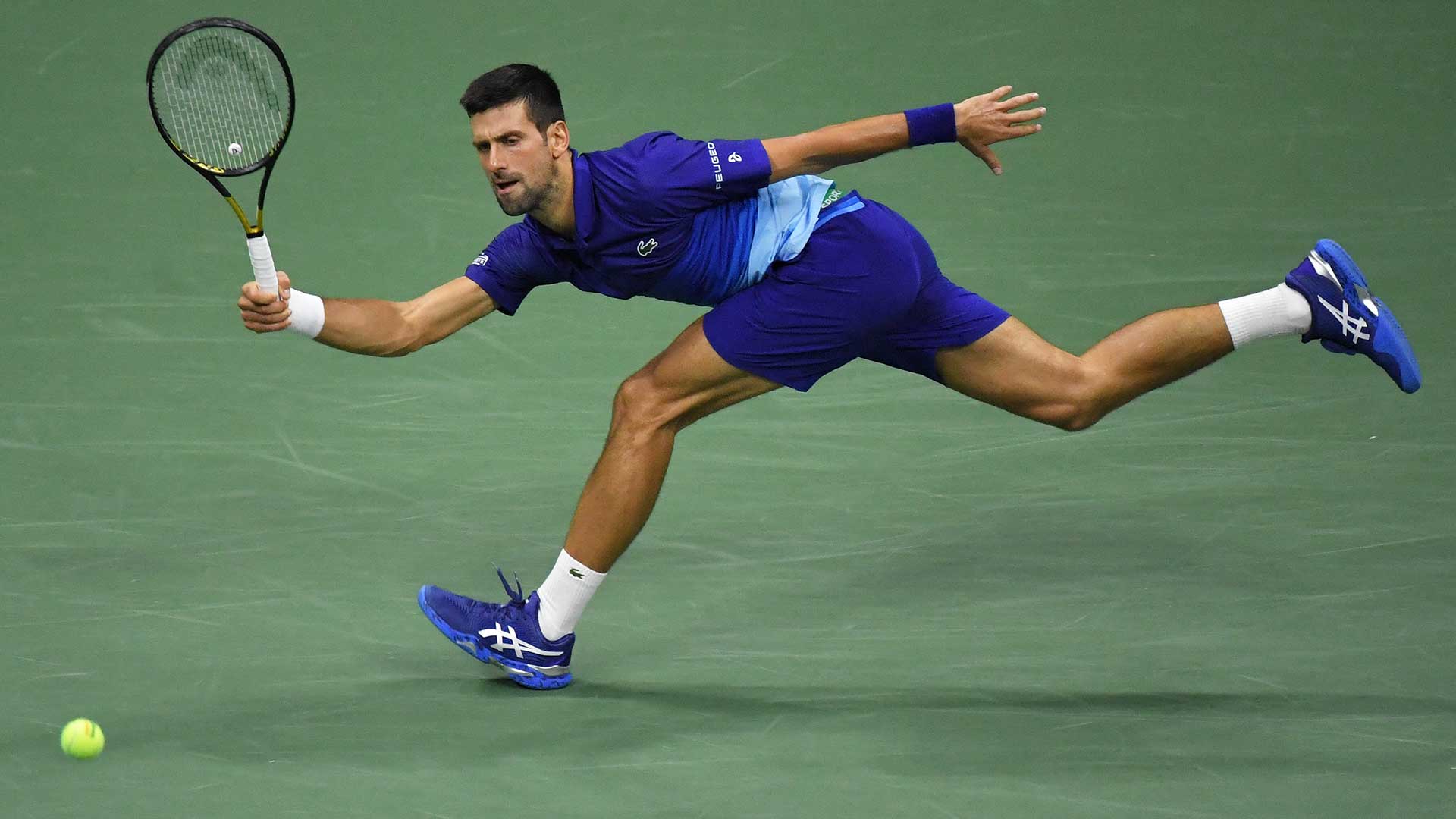 Novak Djokovic has rallied from a set down four times during this year’s US Open.” />

“I’m going to put my heart, my soul, my body and my head into that one,” Djokovic said in his on-court interview on Friday night. “I’m going to treat that match like it’s the last match of my career.”

Djokovic made it clear his never-say-die reputation was built up over many years, having successfully found a way through crunch moments in the biggest matches time and again. It was a timely reminder for Medvedev ahead of the showdown on Sunday.

“Probably all these big matches that I won, big titles over the years, have kind of built that kind of aura around me that players know there’s a never-die spirit with me, especially when I play Grand Slams,” Djokovic said. “They know that until the last shot things can turn around, which was the case in several occasions throughout my career.

“So I’m glad that my opponents think of me that way. I want them to feel that they are under extreme pressure when I’m facing them on a big stage in Grand Slams.”