It had been half a decade since an American man reached three ATP Masters 1000 quarter-finals in the same season, a drought 11th seed Taylor Fritz ended on Thursday at the Western & Southern Open. With his fourth consecutive win over 2021 runner-up Andrey Rublev, 6-7(4), 6-2, 7-5, the 24-year-old earned a place among the last eight and his first matchup with World No. 1 Daniil Medvedev.

This time last year, Fritz was outside the Top 40 in the Pepperstone ATP Rankings, a string of frustrating opening-round losses in Washington, Toronto and Cincinnati weighing him down. He returned to Ohio in 2022 a different player in so many respects. Last month, the 13th-ranked Californian, whose entourage these days regularly includes a trail of Netflix cameramen seemingly documenting his every move, pushed through to his first major quarter-final at Wimbledon.

“I was playing pretty bad this time last year,” said Fritz. “It’s weird, because last year, I kind of just started playing really good tennis late in the year — the October [edition of] Indian Wells, is kind of where it all started changing for me. I started gaining confidence, playing really good. Up until that point, my ranking had dropped a tonne.”

“I just feel like a different player,” he added.

Medvedev, who is guaranteed to retain his No. 1 Pepperstone ATP Ranking heading into the US Open thanks to Rafael Nadal’s opening-round defeat, is at home on the Lindner Family Tennis Center, where he took the trophy in 2019. All but one of his 14 career singles titles have come on hard courts, including Masters 1000 crowns in Cincinnati, Shanghai, Paris and Toronto. Though he’s shared the practice court with Fritz, it will be a whole new experiencing facing him with the semi-finals on the line on Friday.

“Taylor is a great player,” observed Medvedev after his 7-5, 7-5 dismissal of Canada’s Denis Shapovalov in the Round of 16. “We practised quite a lot of times before the start of the season. We had a session. I think he beat me. I told my coach, ‘Wow, it can be a good year for him.’ Then he won Indian Wells. Maybe he could have done better in some other tournaments, but he’s a Masters champion. I need to be at my best to try to beat him.”

It’s been a challenging year for Isner, who came into the tournament in danger of falling out of the Top 50 for the first time since 2009. But a run to his first ATP Masters 1000 quarter-final of 2022 should provide just the boost he needs as he heads into the US Open.

“I love playing in North America on the hard courts,” said Isner, at 37 the oldest player remaining in the draw. “It’s tough — last week I wasn’t able to play Canada because I was a little bit nicked up. My knee’s been bothering me, but I’ve been able to get some good treatment.

“I feel pretty mentally refreshed. My family is with me,” he continued. “That actually helps. Putting three kids to bed at night is a bit tiring, but I wouldn’t trade it for anything. I’d rather have them on the road and have them wake me up super early in the morning, because it just puts me in a happy place. I think it allows me to play better tennis, especially in the tight situations.”

Isner defeated his doubles partner, 10th-ranked Hubert Hurkacz of Poland, in the second round for his first Top-10 win of the season, his first since taking down No. 7 Rublev in Toronto this time last year. Tsitsipas has a 16-5 ATP Masters 1000 tournament record this season, his best result the Monte Carlo title. 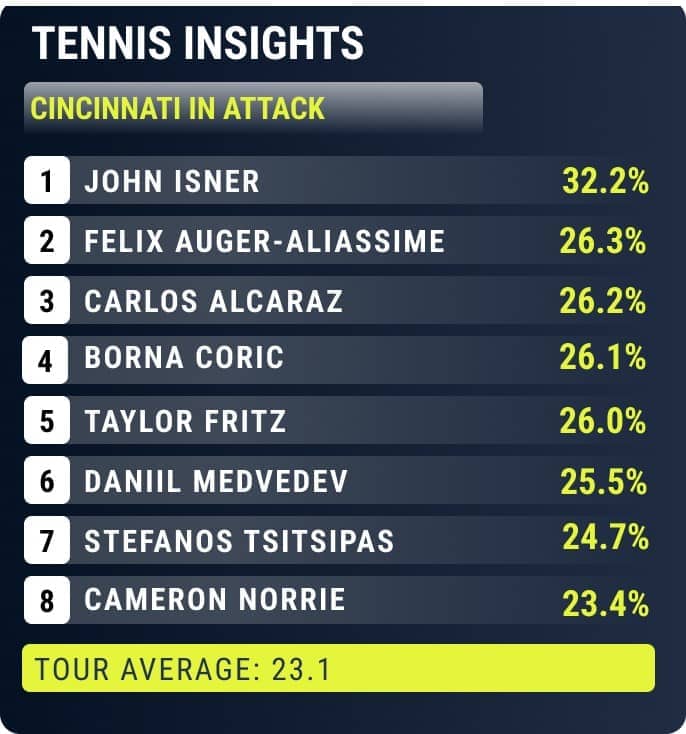 After a prolonged stretch away from the court, a healthy Borna Coric has been busy making up for lost time. The Croat, who last year underwent shoulder surgery, stunned No. 2 seed Rafael Nadal on Wednesday night, 7-6(9), 4-6, 6-3, and followed with a big win over another Spaniard, 15th seed Roberto Bautista Agut, 6-2, 6-3. The 25-year-old is in for another challenge in seventh seed Felix Auger-Aliassime, who’s into his fourth consecutive ATP Masters 1000 quarter-final after reaching the stage in Madrid, Rome and his native Montreal.

Former Texas Christian University standout Cameron Norrie brought reigning NCAA titlist Ben Shelton’s dream run to an end in the Round of 16, 6-0, 6-2, earning a quarter-final shot at another streaking 19-year-old, No. 3 seed Carlos Alcaraz. The 2021 Indian Wells champ has come up short in all three of his meetings with the Spaniard, two of those losses coming this year at the Masters 1000 level in Indian Wells (6-4, 6-7(4), 6-3) and Madrid (6-4, 6-3).

Alcaraz, the only player to win multiple Masters 1000 titles in 2022, is the youngest Cincinnati quarter-finalist since Andy Murray in 2006. The teen will rise to No. 2 in the Pepperstone ATP Rankings if he wins the title this week. 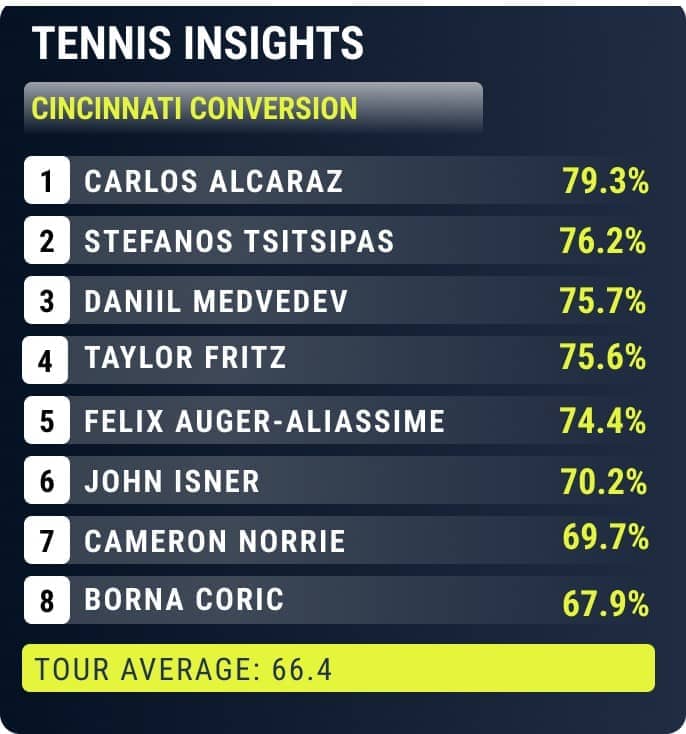