The world’s best tennis players will face one another over the next fortnight with the US Open trophy at stake. On Wednesday evening, however, they banded together for a Tennis Plays For Peace exhibition in support of Ukrainian humanitarian relief.

“[It has been a] very tough couple of years in terms of [the] pandemic, now with the war,” Nadal said. “Excited to be back of course, always a pleasure to play in New York and in front of probably the best crowd of the world.”

After an opening ceremony featuring Stakhovsky, Savchuk and host Patrick McEnroe, the Ukrainian national anthem was performed and Nadal took the court for a mixed doubles match alongside Swiatek against Gauff and McEnroe.

“Being on the court with John, Rafa and Iga, World No. 1, it’s really crazy here in New York,” Gauff said. “I’m happy that I’m able to do it for this cause and you guys all know me, I like to speak out when it’s right. I’m glad that I was able to be a part of this.” 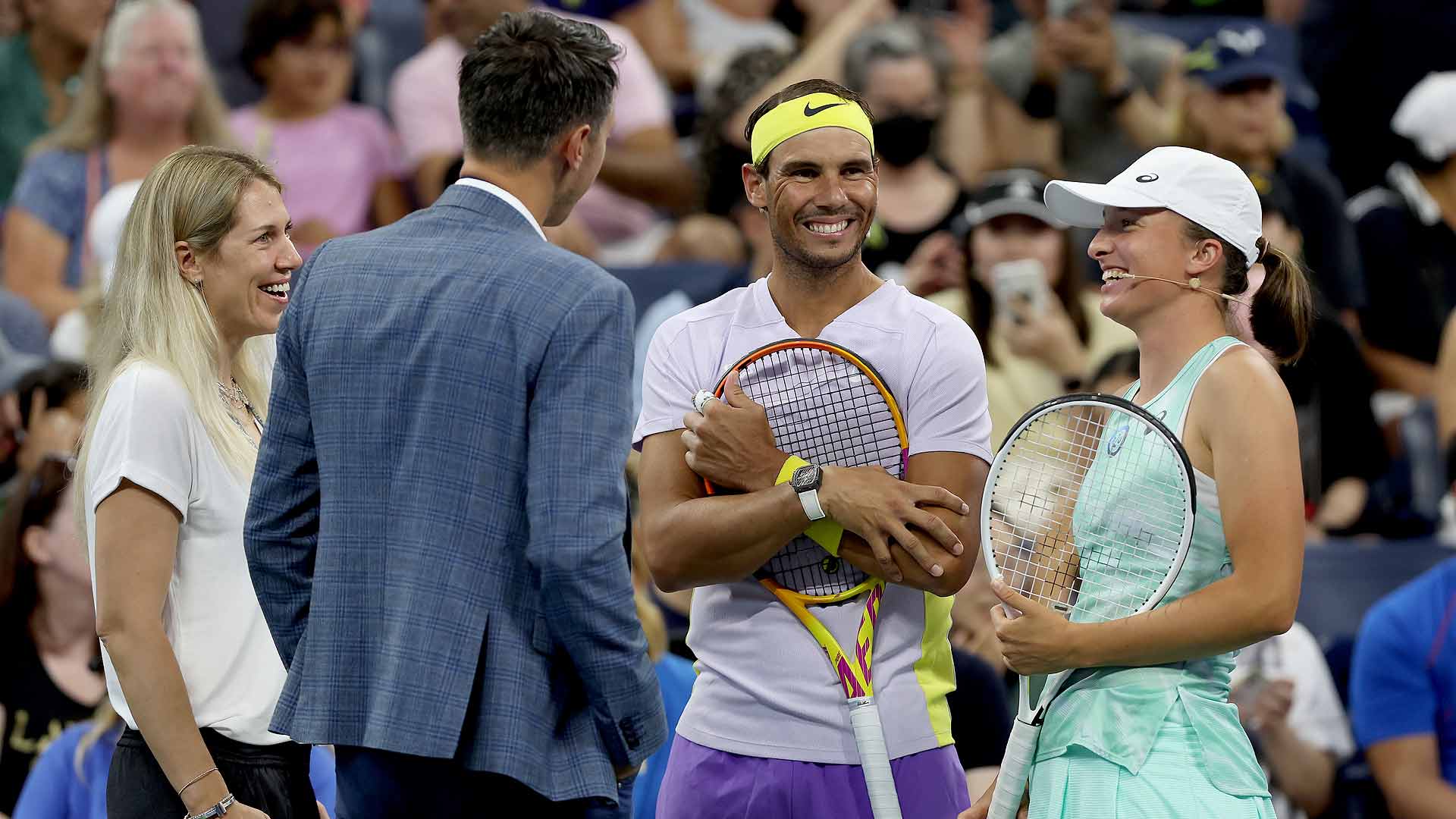 Sergiy Stakhovsky, Rafael Nadal and Iga Swiatek” />
Savchuk and Stakhovsky chat with Nadal and Swiatek during the exhibition.
Swiatek snuck in a joke about ‘Coach Rafa’: “On the last point [he] told me that John is going to serve wide and he was wrong. He’s wrong sometimes, wow!” she said as Nadal laughed. Swiatek has previously held her own charity event in support of Ukrainian children. The World No. 1 was happy to spend her time for the cause again.

McEnroe, who also ironically spent time as the chair umpire later in the event, grew up 15 minutes from Flushing Meadows. The former World No. 1 thanked the crowd for their support.

“I just want to say for this event, we’re all a fraternity, the tennis players. We’re pulling for each other,” McEnroe reflected. “Obviously we all want peace and hopefully this will do something towards helping the situation over in Ukraine.”

All matches during the event were tie-breaks with the winning team being the first to 10. Americans Jessica Pegula and Ben Shelton faced Canadians Felix Auger-Aliassime and Leylah Fernandez (with John McEnroe in the chair), Italian Matteo Berrettini and Ukrainian Katarina Zavatsksa played Greeks Maria Sakkari and Stefanos Tsitsipas, Spaniard Carlos Alcaraz and American Frances Tiafoe took on Americans Taylor Fritz and Tommy Paul, and Tiafoe stayed on the court to partner Ukrainian Dayana Yastremska against American Sebastian Korda and Ukrainian Daria Snigur.

While these were exhibition matches — at one point Paul used a giant tennis racquet, drawing roars from the crowd — the stakes were raised. Before Sakkari served to Berrettini, Tsitsipas said he would donate $10,000 if the Italian missed the return. Berrettini missed it, and Tsitsipas happily reaffirmed his donation.

All proceeds from the event will benefit Global Giving’s Ukraine Crisis Relief Fund. The USTA has previously announced that it expects to raise at least $2 million for the cause during the US Open.