In-form Australian Nick Kyrgios is on the rise in the latest ATP Tour singles and doubles rankings. 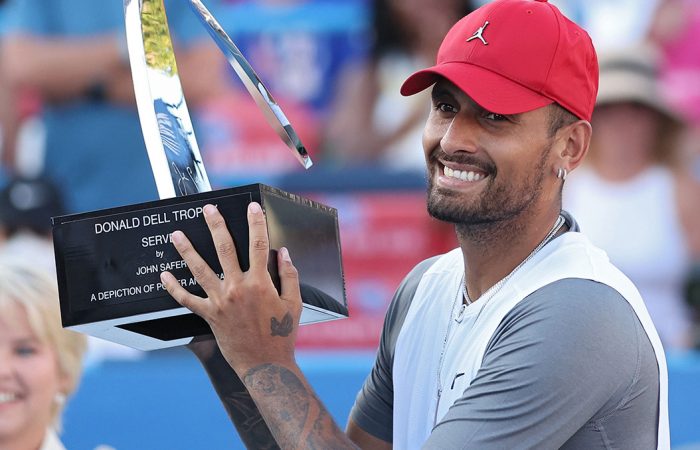 Nick Kyrgios has skyrocketed back inside the world’s top 40 in the latest ATP Tour men’s singles rankings.

The 27-year-old jumps up 26 places to world No.37 after capturing his seventh career ATP singles title at Washington. Kyrgios, who has won 19 of his past 23 matches, now sits at his highest ranking since February 2020.

Dayne Kelly takes biggest mover honours this week, improving 47 places to world No.477 following his title-winning run at an ITF tournament in Caloundra.

Rinky Hijikata has been rewarded for scoring his first ATP main draw victory at Los Cabos last week, with the 21-year-old rising 23 places to a career-high world No.201.

Daria Saville is edging closer to reclaiming the No.1 Australian position, rising 15 spots to world No.73 in the latest WTA Tour women’s singles rankings.

It follows the 28-year-old advancing to her first WTA semifinal in four years at Washington last week, a thrilling run that included a second-round victory against world No.7 Jessica Pegula.

Talia Gibson takes biggest mover honours for the second consecutive week, with the 18-year-old from Perth improving 44 spots to a career-high world No.557 after claiming back-to-back ITF titles in Caloundra.

Priscilla Hon is also on the rise, improving 27 places to world No.169 after winning her sixth career ITF title – and second this season – at an ITF tournament in Nottingham.

Nick Kyrgios is verging on a top-20 breakthrough in the latest ATP Tour doubles rankings, rising to a career-high world No.22 after capturing back-to-back titles in Atlanta and Washington.

Andrew Harris is back inside the Australian top 10, with the 28-year-old improving 12 places to world No.193 on the back of consistent results at ATP Challenger level.

Jaimee Fourlis returns to the Australian top 10 in the latest WTA doubles rankings, rising 26 places to world No.291.

The 22-year-old recently recorded a runner-up finish at an ITF event in Germany alongside compatriot Alana Parnaby, who improves 11 spots to world No.254.