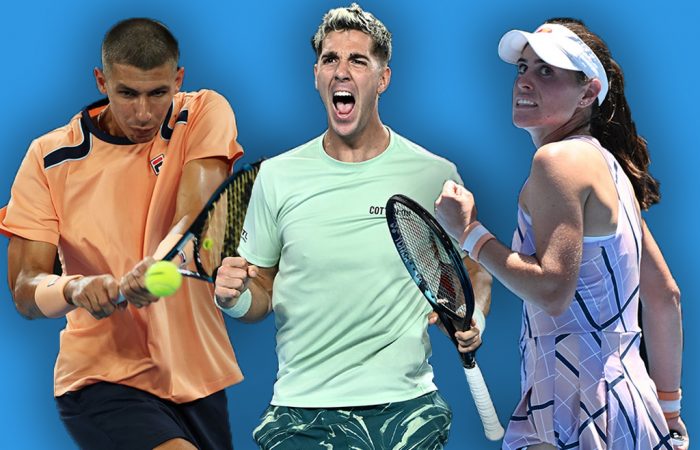 As Australian Open 2023 unfolds, Aussie players are inspiring with their determination and efforts.

“I’ve worked my absolute butt off just to get back on the court,” explained the 24-year-old Birrell, who nearly ended her career after two elbow surgeries.

“There was a few moments where I didn’t think it was going to happen.”

Thanasi Kokkinakis’ resilience to overcome multiple injury setbacks makes him a crowd favourite, while a resurgent Alexei Popyrin is winning hearts with his spirited efforts too.

Birrell, Kokkinakis and Popyrin are among 21 Aussie players scheduled to compete on day four at Australian Open 2023.

[WC] Kimberly Birrell (AUS) v Linda Fruhvirtova (CZE)
Women’s singles, second round, Kia Arena, third match
Birrell scored an emotional first-round win to advance to a Grand Slam second round for the first time in four years. The 24-year-old from the Gold Coast, a wildcard ranked No.167, is now aiming to match her career-best result from AO 2019, when she made the third round. Her opponent, 17-year-old Fruhvirtova, is making her Australian Open debut. The world No.82 is the youngest woman currently ranked inside the world’s top 100 and now hoping to make her own mark on the Grand Slam stage.
Head-to-head record: First meeting

[WC] Alexei Popyrin (AUS) v [8] Taylor Fritz (USA)
Men’s singles, second round, John Cain Arena, third match (not before 3pm AEDT)
World No.113 Popyrin has made a strong start to the 2023 season, winning five of his seven matches. The 23-year-old Aussie scored a five-set epic in the opening round, setting up a showdown with world No.9 Fritz. Popyrin scored his third career top-10 win at Adelaide earlier this month, which makes his 25-year-old American opponent wary. “He honestly plays kind of similar to myself,” Fritz noted. “Big serve. Looks to get around and attack with his forehand.”
Head-to-head record: Fritz leads 1-0
Last meeting: Fritz won 6-4 6-3 (Washington, August 2022)

[22] Alex de Minaur (AUS) v Adrian Mannarino (FRA)
Men’s singles, second round, John Cain Arena, fourth match (not before 7pm AEDT)
De Minaur is preparing for a battle against world No.45 Mannarino, who scored two top-20 wins at Australian Open 2022 to reach the fourth round. “I know what’s coming. He’s a tricky opponent,” De Minaur said of the 34-year-old Frenchman. “He’s going to fight until the end. I’ll be getting ready for a four or five set battle, for sure.” The 23-year-old De Minaur has won both of their previous hard court meetings, but the left-handed Mannarino had his measure on grass at s-Hertogenbosch last season.
Head-to-head record: De Minaur leads 2-1
Last meeting: De Minaur won 4-6 6-3 6-0 (Atlanta, July 2022)

Thanasi Kokkinakis (AUS) v Andy Murray (GBR)
Men’s singles, second round, Margaret Court Arena, night session, second match
Kokkinakis is hoping to reach the Australian Open’s third round for the first time. Standing in the world No.159’s way is a five-time Australian Open finalist and former world No.1. The enduring 35-year-old Murray, who has slipped to world No.66, won an almost five-hour first-round battle against 13th seed Matteo Berrettini. “His anticipation is just as good as ever, and he can still play at the top,” Kokkinakis said. “I’m going to be ready for the best version of Murray. I’m going to go out there and play my game, play aggressive, and hopefully come out best.”
Head-to-head record: Murray leads 1-0
Last meeting: Murray won 6-3 6-0 6-3 (Davis Cup, September 2015)

[WC] Sam Stosur (AUS)/Alize Cornet (FRA) v [11] Chan Hao-Ching (TPE)/Yang Zhaoxuan (CHN)
Women’s doubles, first round, Kia Arena, first match (from 11am AEDT)
Stosur is contesting the 21st and final Australian Open of her storied career. The 38-year-old fan favourite and former world No.1 is partnering Frenchwoman Cornet in her last doubles campaign at Melbourne Park. They play world No.37 Chan and world No.10 Yang in the opening round. Stosur is a two-time Australian Open doubles finalist, finishing runner-up in 2006 and winning the 2019 title.

John-Patrick Smith (AUS)/Alexander Bublik (KAZ) v [1] Wesley Koolhof (NED)/Neal Skupski (GBR)
Men’s doubles, first round, 1573 Arena, first match (from 11am AEDT)
Smith is making his 11th consecutive appearance in an Australian Open doubles draw. The 33-year-old from Townsville, who is ranked No.78, is partnering Bublik, a 25-year-old from Kazakhstan. They face the top seeds. Koolhof and Skupski, who are co-ranked No.3, were the world’s best team in 2022, winning seven titles from 10 finals appearances.

[WC] Dane Sweeny (AUS)/Li Tu (AUS) v Andrey Golubev (KAZ)/Aleksandr Nedovyesov (KAZ)
Men’s doubles, first round, Court 12, second match
Sweeny and Tu proved surprise packets at Australian Open 2022, reaching the doubles third round in a stunning run. Both 21-year-old Sweeny and 26-year-old Tu went on to have career-best seasons and break into the world’s top 200. Teaming up again this year, world No.160 Sweeny and world No.197 Tu face a Kazakhstan combination of world No.49 Golubev and world No.59 Nedovyesov.

[WC] Jaimee Fourlis (AUS)/Astra Sharma (AUS) v [15] Caty McNally (USA)/Luisa Stefani (BRA)
Women’s doubles, first round, Court 13, third match
The 23-year-old Fourlis and 27-year-old Sharma are both former Australian Open mixed doubles finalists and now looking to emulate that success in the women’s doubles competition. Currently ranked No.303 and No.153 respectively, the Aussie wildcards have a tough first-round assignment. McNally, a 21-year-old American, is ranked No.21 and Stefani, a 25-year-old Brazilian, is ranked No.34.

[WC] Olivia Gadecki (AUS)/Priscilla Hon (AUS) v Ana Bogdan (ROU)/Tatjana Maria (GER)
Women’s doubles, first round, Court 17, third match
Gadecki and Hon, both from Queensland, are teaming up at this year’s Australian Open. The 20-year-old Gadecki and 24-year-old Hon face a more experienced pair in the opening round. Maria, a 35-year-old from Germany, is making her 11th appearance in an Australian Open doubles draw and Bogdan, a 30-year-old from Romania, is making her third.

[WC] Alexandra Bozovic (AUS)/Lizette Cabrera (AUS) v Nadiia Kichenok (UKR)/Kimberley Zimmermann (BEL)
Women’s doubles, first round, Court 5, fifth match
The 25-year-old Cabrera is looking to advance to the second round in the Australian Open doubles draw for a third consecutive year. The Townsville talent is partnering Bozovic, a 23-year-old from Sydney contesting her second Australian Open. Their first-round opponents, world No.75 Kichenok and world No.39 Zimmermann, made the Hobart International semifinals last week.

[WC] Talia Gibson (AUS)/Olivia Tjandramulia (AUS) v [WC] Moyuka Uchijima (JPN)/Wang Xinyu (CHN)
Women’s doubles, first round, Court 13, fifth match
Tjandramula, a 25-year-old from Queensland, is Australia’s No.4-ranked woman in doubles at world No.120. She is partnering rising star Gibson, an 18-year-old from Perth with a doubles ranking of world No.226. Both are looking to record their first Grand Slam-level wins when they play fellow wildcards, world No.155 Uchijima and world No.168 Wang.